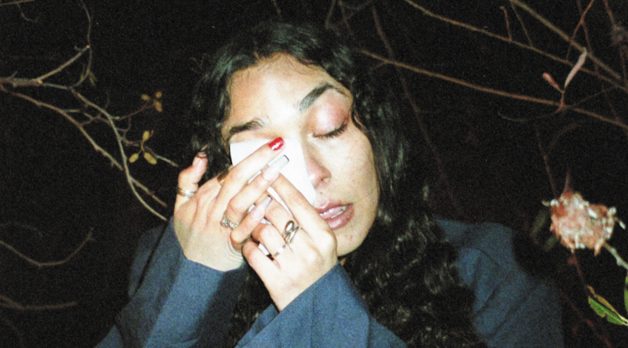 Fox Maxy’s work skitters along associative tracks. Testimony, interviews and activism often play for an extended length against digital backdrops and landscapes that Maxy creates themselves; other times, footage of friends and family are edited into rapid-fire cascades, their links often excitingly too fast to follow. Soundtracked by a jittery mix of Native artists and more ubiquitous figures (Tupac and Dolly Parton are in there, too), the results are a slipstream into Maxy’s consciousness, where cultural and political issues sit side-by-side with diaristic footage shot since 2011.

“I realized I didn’t want to work in the white world at all,” Fox says of their path from the fashion industry to making experimental shorts. Growing up, Maxy—an Iipay Kumeyaay and Payómkawichum filmmaker—often listened to their grandparents talking about their past. They were creatively inclined, prone to making books and taking photos in their spare time, but film was always their primary interest, even though they didn’t see many growing up. Maxy found it easy to learn editing software while studying advertising in college, which “made me available for more work.” Once in fashion, Maxy transitioned to the production side and discovered they enjoyed building sets and the camaraderie of working with a crew. But, fed up with the racism and sexism of the industry (“I don’t put up with a lot of bullshit”), Maxy left that field and went to join the anti-pipeline-construction protests at Standing Rock for five months. That led to work with a Native documentary collective that traveled to Native country, filming stories often related to mental health and other urgent issues.

When their time with the collective ended, they “came home to California right as the pandemic started. Quarantine was a time when I felt at peace.” Maxy notes of the moment when they started completing short films, each of which take two to three months of editing: “I didn’t have anything else going on. That’s what made me delve into the archives, a decade’s worth of footage of fucking around, mainly in New York with my friends—partying, going out to eat, at someone’s apartment listening to music.” The resulting work includes the shorts San Diego and Maat Means Land (which premiered at AFI Docs 2020 and Rotterdam 2021, respectively). San Diego is a quarantine film shot through with memories of better days past and spirit-sustaining livestreams of Native rituals from the early days of lockdown, while Maat puts Standing Rock into nonlinear conversation with footage of Hawaiian native activists and activist network interviews with prison firefighters, weaving a tapestry of colonialism and resistance.

Their first feature, Watertight (currently shooting), creates extended space for long interviews, with Maxy’s friends speaking, individually and in groups, to frustrations with a lack of cultural representation of Natives, suicidal ideation and processing trauma. Maxy began work on the project when they got their first grant, from Indigenous filmmaking collective COUSIN, and has ambitious plans for further shooting, with an itinerary including stops at Indian country in California, New Mexico and the Dakotas, as well visiting friends in New York, Los Angeles and Washington State. “It’s a movie about mental health and surviving these times,” says Maxy, who also plans to shoot short narrative skits to go between interviews, “almost like commercial breaks.” This, they say, will also get them closer to a much-desired more professionalized way of working, “with a crew, shotlist, costumes and a set.” The goal is to no longer “work from a place of lack,” Maxy says. As San Diego’s final credits pointedly instruct: “ur on stolen land. $upport Native voices.”— Vadim Rizov