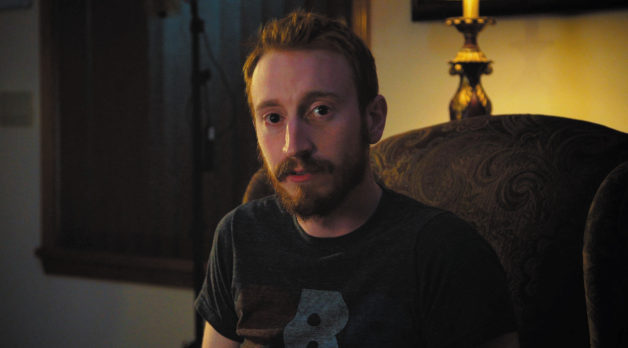 While researching and writing the science fiction screenplay that would become his ingenious debut feature, The Artifice Girl, Franklin Ritch studied the dialogue and body language found in police interrogation tapes. “Detectives have a rhythm to their questioning,” the Jacksonville, Florida–based filmmaker says. “It was especially intriguing to watch these tapes without knowing the context of the crime. It became clear that in order to keep the audience engaged through the heavy exposition of [The Artifice Girl‘s] first act, each page of the script needed to alternate between revealing a secret and setting up a new enticing mystery.”

The dialogue is indeed gripping in the feature’s first act, set within a dark, windowless interrogation room. Gareth, played by Ritch himself, is a hacker questioned by two detectives who think he’s the anonymous informer providing information that has led to the arrest of online child predators. The cops (Sinda Nichols and David Girard) are grateful for the tips while alarmed by Gareth’s method: He has seemingly conscripted a young, blonde 11-year-old girl, Cherry (Tatum Matthews, who gives one of the best child performances you’ll see all year), as chat room bait. Over 30 riveting minutes, the detectives and Gareth battle it out, until Gareth makes his incredible reveal: Cherry isn’t real. She’s an artificial intelligence already “authentic” enough to banter with, and ultimately ensnare, online abusers.

The themes established in The Artifice Girl’s first act— shot in the fall of 2020 as a COVID-friendly feature proof of concept—are thrillingly expanded in the next two, which span 60 years and grapple with subjects such as generational trauma, AI ethics and Roko’s Basilisk, the knotty AI thought exercise. But Ritch says he wasn’t compelled to begin The Artifice Girl until stumbling on a potent metaphor: “There could be a connection between the budding adolescence of AI and repressed childhood trauma. That was the ‘Eureka moment’—the idea of using a computer program to catch predators, but what if the developer’s hidden scars and flaws become inherently adopted by the AI?”

Once his proof-of-concept segment was finished, Ritch sent it to Fantastic Fest and TIFF programmer Peter Kuplowsky, who introduced the director to the Austin-based Paper Street Pictures, which provided financing and resources to complete the film. Several months transpired between the second and third act shoots so that Lance Henriksen could play a pivotal role for the film’s climactic finale. The shoot was a total of 15 days—five days per act—and Ritch says he embraced the concept of “measure twice, cut once”: “Because I was editing the film and knew how every moment would play out in the edit, we ended up putting a lot of work into preproduction with meticulous shotlists, storyboards and previsualization.” Most impressively, all of Cherry’s scenes on television monitors were done without compositing, with Matthews in an adjoining room responding to the other actors in real time.

Creative influences included My Dinner with Andre, the original Star Trek, Metropolis and Primer, the latter of which offered tips on conceptualizing low-budget science fiction: “Instead of showing flying cars and characters with transparent bodies, just strip things down to grounded conversations taking place in familiar spaces. We slowly introduce small elements that are extraordinary but believable. If we anchor the audience in reality, more fantastic things can happen later in the film and feel like part of a natural trajectory.”

Ritch traces his love of filming to childhood, when, at age 7, inspired by the Wallace and Gromit short The Wrong Trousers, he gathered a camera, plasticine and Lego to make stop-motion animated films. He went on to make shorts in high school, a web series in college and, after graduation, then was hired as “a PA/associate producer” at a local commercial production house, Digital Video Arts: “On one of the commercial shoots, we had been shooting eight hours straight, and the director turned to me, the coffee PA, and said, ‘OK, you’re in charge, take over.’ I guess he had seen my work on YouTube and was willing to take a risk. I did my best and directed the rest of the shoot, and after that I was asked to direct more of their content.” Soon, Ritch was directing his own short films using the Digital Video Arts crew and building a relationship with c0-owner, Britt McTammany, who has become the director’s longtime DP.

The Artifice Girl premiered at this year’s Fantasia Festival, where it won the Golden Audience Award for Best International Feature. Ritch, who intends to remain in Jacksonville, has three feature scripts up next “and a few television pilots” already completed. “The second film is going to be really important,” he says. “Should it be another dark, gritty science fiction, or something completely different? I have stories that are an obvious thematic follow-up to The Artifice Girl, but I also have stories that are completely out of left field. It’s going to be a matter of time before finding out which will be next.”— SM/photo by Britt McTammany