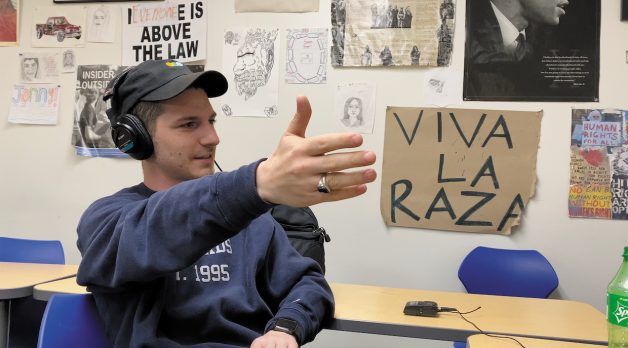 Much of Frederic Da’s life has been an extended exercise in film education. His youthful penchant for raiding his uncle’s indie DVD collection led him to pursue cinema studies at NYU (“I wanted to do film production, but my mom, a teacher, wanted me to have a B.A., not a B.F.A.”), where he and his roommate spent their days devouring movie classics.

Now 36, the L.A.-based filmmaker has imparted his love of cinema studies to a new generation. For the past several years, Da has taught high school film theory and production classes at New Roads School in Santa Monica. Though Da initially thought it would be a temporary gig, his role as an educator is now permanently entwined with his filmmaking practice. “I’d been teaching these students for four or five years, and they got comfortable with me,” he says. “One day, I overheard them gossiping. On a whim, I asked if I could record it—they said yes.”

Thus began the filming of Teenage Emotions, Da’s debut feature, which premiered at Slamdance 2021 and showcases many of his students in roles that are essentially fictionalized versions of themselves. Shot like a vérité documentary about the enduring awkwardness of high school, the film carefully constructs arcs and connections between random scenes filmed on iPhones among lunch tables and lockers. Snippets of genuine conversation and rehearsed dialogue avoid voyeuristic closeness while cohering into a realistic mosaic of perennial pubescent predicaments, where unrequited love and festering insecurity carry the added weight of blunt sincerity.

Certain exchanges were entirely configured by Da during extensive after-school editing sessions—accompanied by his wife, French actress Roxane Mesquida, who Da describes as an “awesome” editor—where he would weave together previously unrelated scenes to create a narrative thread.

Teenage Emotions is an expansion of Da’s Slamdance 2020-premiering short, Ava’s Dating a Senior! The self-explanatory premise is repurposed in the feature but is by no means the film’s defining interaction. The most salient relationship is between Jaya (Jaya Harper) and best friend Clementine (Clementine Warner), who disagree about the validity of vying for male attention while sardonically mocking their own perceived flaws. The perceptiveness with which Da portrays these mundane but piercing realities of American adolescence becomes loaded when considering the filmmaker’s French roots: “I might sound American, but I was not born and raised here,” he says. “I’m interested in these anthropological looks at American culture.”

His pursuit in this realm remains unwavering, with his next project once again involving his students and workplace. nobody cares follows a high schooler (played by Harper) who succeeds in getting her teacher fired, then finds that her classmates turn against her. Much like the development of Teenage Emotions, nobody cares currently exists as a short film that Da hopes to expand into a feature after securing funding during the forthcoming festival circuit.

Despite his success with capturing teenage tumult, Da maintains that his drive as a filmmaker is intrinsically linked with his lived experiences (“I worked as a waiter in NYC for four years, and I would film everything on the job—but I ended up not doing anything with it”). So long as he remains enmeshed in the daily minutiae of high school (mis)education, it will persist as a prominent facet of his filmography. “When you start seeing things in a certain light, everything’s inspiring—which can end up being a problem,” he laughs. “A movie about waiters would still be cool, but teenagers are just my life right now.”— NK