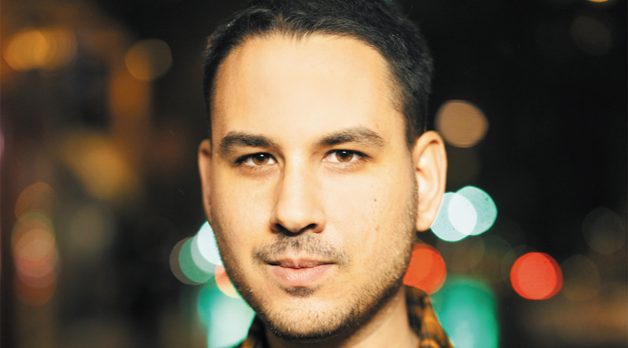 In three 16mm shorts that premiered over the past three years, Suneil Sanzgiri uses a broad array of formats to delve into his father’s memories and their inevitably political intersection with Goa’s history. CG renderings of now-gone and never-visited locations, desktop documentary, commissioned drone footage, archival excerpts of classic Indian films, still-resonant news footage of past protests: All are in the mix as Sanzgiri thinks through key thematic preoccupations—diaspora, colonialism, how to understand a homeland from a distance, political activism and genocides—in overlaid, Roboto-font text.

In 2019’s At Home But Not at Home, which premiered at the International Film Festival Rotterdam, Sanzgiri’s dad, interviewed via Skype, recalls the deep impression movies made growing up in Goa. The theaters, he says, were the first time he encountered air conditioning. Growing up outside Dallas, Sanzgiri was introduced to independent film by his older brother. Some classics, like 8 1/2, he rented from a nearby Blockbuster that was surprisingly well-stocked (“Now that I think about it, Blockbuster was kind of lit”); others he ordered from the Criterion Collection. The work of Satyajit Ray, excerpted in At Home, was key to rewiring Sanzgiri’s early understanding of arthouse cinema: “Knowing that there was an Indian filmmaker who contributed to that was huge.” As an undergrad, Sanzgiri went to art school, eventually getting a degree in interdisciplinary sculpture, but “film theory blew the lid open. The experimental side came from knowing, right off the bat, that I wouldn’t be directing a big-budget film or anything like that and also being drawn much more to the essayistic side of things.” His desktop-centric mode in part reflects his distance from his father’s home country growing up, while choosing to print his CG renderings on 16mm “is a way of giving this material a literal, animated life, subject to the same conditions of decay that my body is.”

Home, in part about his father’s hometown of Curchorem, was made before Sanzgiri had ever visited India. After making it, Sanzgiri started asking himself, “’Why haven’t I been to India? I can get a plane ticket. I don’t know what I’m waiting for.” He booked a ticket for March 2020, arriving with the intent of filming sites where protests were staged against the Citizenship (Amendment) Act of 2019, which effectively barred Muslim migrants from Afghanistan, Bangladesh and Pakistan from a path to citizenship. Despite the rapidly expanding pandemic, Sanzgiri’s “mind was completely preoccupied with the politics of what was going on. It was heartbreaking to watch. Once again, all these horrible things happening to Kashmiris—the occupation of Kashmir, the continued persecution of Dalits and the backlash toward the anti-CAA protests. Watching this genocide, and knowing I’d be there in a week, was a very weighty experience, and I wasn’t sure what I was going to film.”

To shoot what ended up being Letter From Your Far-Off Country, which premiered at NYFF in 2020, Sanzgiri arrived with stock he acquired from New York lab Negativland, which turned out to have expired in 2002—the last year that, before Sanzgiri arrived, state-sponsored genocide against Muslims occurred in Gujarat. The conceptual synchronicity of shooting during the renewal of such actions with stock from that time was unplanned, and the results similarly productive in unexpected ways. “My camera staged its own protest,” he laughs. While filming protest sites, “the gate was open, so it became really blurry, these really beautiful ambiguous shapes and colors. I ended up really loving those images because they spoke so much about that inability to represent something,” Sanzgiri says. (He made it back to the States two days before lockdowns took effect.)

After completing production on third short Golden Jubilee, which recently premiered at the Berwick Film & Media Arts Festival, Sanzgiri traveled to Portugal, Goa’s former colonizer, to begin work on his first feature. The project will grow in part from a kind of counter-reading of the Portuguese epic poem The Lusiads, which celebrates the colonizing exploits of Vasco de Gama. “I’ve been calling it a trilogy, but is it?” Sanzgiri says of the short films. “These are lifelong questions.”— VR