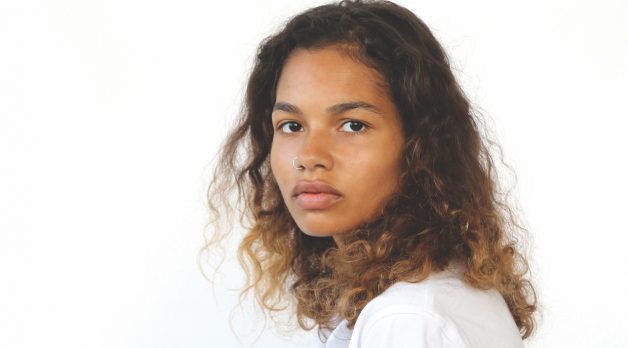 Helena Howard is about to board a plane for the 20-some-hour flight to New Zealand to film an Amazon pilot, The Wilds, in which she’ll play, according to The Hollywood Reporter, an “enigmatic introvert” in a shipwrecked group of teenage girls unaware they are taking part in some kind of social experiment. “It’s loosely inspired by Lord of the Flies,” says Howard, who shares that landing in New Zealand will be a relief. Howard’s debut feature, Josephine Decker’s Madeline’s Madeline, only premiered at Sundance this past January. She says, “I just thought I’d start acting again immediately. But that’s obviously not how it works. I left my acting conservatory and haven’t done anything other than go on auditions. And I’m very picky. I’ve just been waiting so long to get into something I love. I miss acting–it’s my life and my passion.”

When we speak, Madeline’s Madeline is only in the second week of its theatrical release. As more and more audiences and filmmakers encounter Howard’s stunning performance as a gifted teenage acting student confronting complicated family dynamics, a vampiric director and mental illness–a performance dubbed by The New Yorker’s Richard Brody as “one of the most distinctive, most varied, and most extreme in its expressive array and technical power, of any teen performer in the history of cinema”–she’ll certainly not want for extraordinary roles. And however disarmingly natural Howard–who grew up in New Jersey, attended the Union County Academy for Performing Arts and then, on a full scholarship, the American Academy of Dramatic Arts–is in Decker’s film, she’s very much an actor who shapes herself to the part. To access Madeline’s inner turbulence, Howard said she drew from Lee Strasberg’s method as well as from stories Decker told her about the real-life inspiration for the part. “Madeline’s volatile nature was a stretch,” she admits. “I’m an expressive person, but Madeline is expressive internally and then that translates externally–she’s like a gasket ready to blow.” Further describing her approach, she says, “The way I like to describe it is, whoever I’m portraying is driving the car, and I’m the passenger and helping navigate. Like GPS–I can say ‘left’ or ‘right,’ but in this case, Madeline was in control.”

Asked to cite her inspirational films, she names a number of recent releases—Blindspotting, Sorry to Bother You, Phantom Thread—as well as classics like A Streetcar Named Desire. Her all-time favorite, however, is Sophie’s Choice. “I was 11,” says Howard, “and I loved Meryl Streep. My friends were all watching The Devil Wears Prada, but my mom said, ‘You need to see Sophie’s Choice.’” Since then, she’s seen the film more than 10 times. “Meryl Streep and Kevin Kline, they ping pong off each other–it’s a master class in acting,” she says. “Every time I watch it I have the same experience–I’m captivated by the beauty and emotion, yet I also find something new.” — SM/Photo: Peeta Martinez