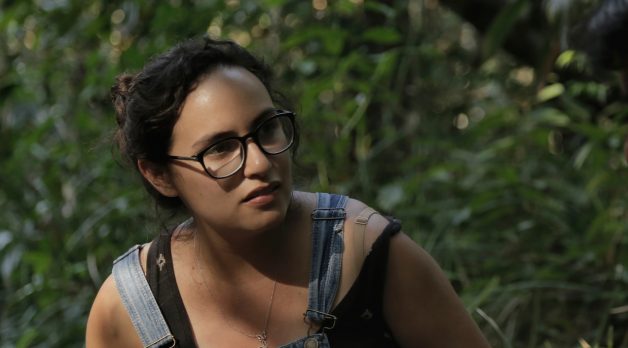 In Ilana Coleman’s And We Stood Still — finished at CalArts, where she recently completed her MFA — a mother arrives in a small town in Chiapas in search of her daughter, part of a group of visiting scientists that has disappeared. A slow-cinema-style trip to a remote part of the jungle begins as a straightforward reconnoitering quest but becomes more surreal as the 24-minute short proceeds: A naked man robbed by police appears from the trees, visions of soldiers from the present or past appear and the narrative dissolves into a compellingly ambiguous thicket. This is appropriate: The film ends with a dedication to parents who have fruitlessly searched for their missing children from 2009 onwards.

Born to a Mexican mother and an American father, Coleman grew up in Mexico City and studied communications there at the Universidad Iberoamericana. “I started with the idea of doing short films in high school, but then I thought that I wanted to do advertising,” she says. “Once I was there, I was like, ‘definitely no.’ The last two years you decide on one minor, and I decided on film.”

After completing several short films — notably her 2012 thesis, the 16mm incest drama Out of Earth, and 2013’s short, unorthodoxly animated anti-racist parable, Theory of Color, which played at Fantasia, among other festivals, in 2014 — and graduating, Coleman committed to film, entering CalArts in 2013. And We Stood Still entered her mind after the infamous 2014 disappearance of 43 students on their way to a protest. Having worked as a teacher in Chiapas in 2010, Coleman had always wanted to make a film there, and the disappearance “triggered how I felt about Mexico. Once you’re far away, it’s clearer to see what’s wrong with that, so I decided I wanted to make this story.”

Before starting production, Coleman returned home and “started interviewing mothers whose children have disappeared in Mexico City, mostly in the northern part. My idea was to put those interviews into the film. It didn’t work, but I applied many of the things I learned from the interviews into the script.” Those interviews will now form the starting point for Coleman’s next project, which will interpolate them alongside fictional sequences in what she describes as “a film-essay about the use of language and the impact of the situation in Mexico.”

While she didn’t encounter any potential threat making the fictional And We Stood Still, this next project might be more difficult: “I’m close friends with Article 19, an organization that protects journalists, and I often ask about that [possibility]. I don’t feel threatened, but there’s a possibility that could happen.” As a producer, she’s collaborating with 2015 New Face of Film Juan Pablo González on two projects — a feature expansion of his documentary short, The Solitude of Memory, and the narrative feature Dos Estaciones, recently accepted into the Venice Biennale College (with 2015 New Face Jamie Gonçalves also producing). She’ll remain based in the States for now and hopes to shoot a short here soon — besides, as she notes, “I have loans to pay.” — VR