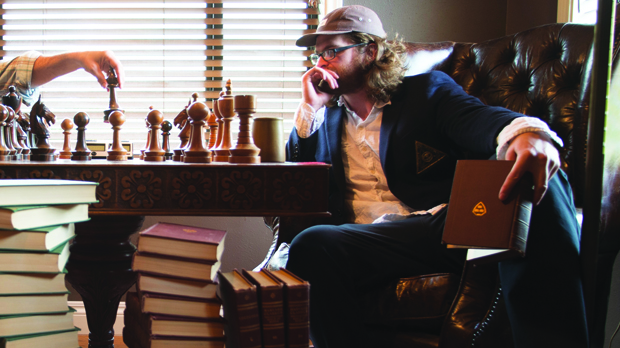 Bennington-bred and L.A.-based documentarian Joe Callander’s formal film training began and ended with a high school video production class. After acquiring an advertising degree, he took jobs as a Vespa mechanic in Manhattan and at a carbon fiber factory back home. In 2008, Callander quit and moved to Bangkok to make a documentary about a Vietnam veteran pursuing a Ph.D. “I was hoping for a story of redemption and second chances, but in hindsight that may have been a bit naïve,” he wrote in an email. “I shot 250 hours of footage and, six years later, ended up with a 17-minute short called Gary Has an AIDS Scare. Statistically speaking, I used roughly zero percent of the footage, but in many ways the experience was probably a lot more valuable than film school.”

Callander’s documentary career acquired focus and backing when he unexpectedly became the Filmmaker in Residence for Saddleback Leather and Love 41, sister companies owned and operated by husband-and-wife Dave and Suzette Munson. (Callander had been working customer service and phone support before the Munsons learned he was an erstwhile filmmaker and created the position.) The former is a straightforward leather products business, the latter a jewelry, apparel and accessories company that directs its proceeds to helping orphans worldwide.

The terms of Callander’s work called for him to produce ads and shorts for both companies, working as his own sound operator no less. “I said, that’s impossible,” Callander recalled. “[Dave] said, ‘Everything is impossible until it isn’t.’ I said ‘Fine,’ and set about figuring out how to make it work.” His work with the Munsons took him to Rwanda, where he filmed Tina Delivers a Goat, a two-minute short in which Suzette’s sister does exactly that for an impoverished family. At 95 seconds, the even more economical Sundance short Tim and Susan Have Matching Handguns has the title Love 41 patrons talking firearms. “Isn’t it romantic?” Susan asks. As in Tina, Callander avoids an obvious editorializing response to her loaded statement.

Callander’s first feature Life After Death, which premiered at True/False, grew out of three trips to Rwanda on Love 41 business. After shooting a 12-minute short with Kwasa, one of Dave and Suzette’s sponsored subjects, he was left to his own devices to portray their evangelistic relationship. The thorny ties between Christian patron and native subject are diagrammed with a light touch and a one-man-crew’s adept eye for pleasing framing found on the fly.

Despite Callander’s salaried position, the film doesn’t feel like sponsored content. Still, viewers may be wildly at odds over the value of the intentions and outcomes on display, an ambiguity enabled by Callander’s financiers/subjects, whom he calls “pretty much the most hands-off, laid-back producers I could ever imagine working with.” Future plans include keeping up the marketing work with his patrons, multiple proposed shorts and features, converting Gary into an “experimental Web series” and hopefully launching a complete fiction short debut on the fest circuit next year. — V.R.