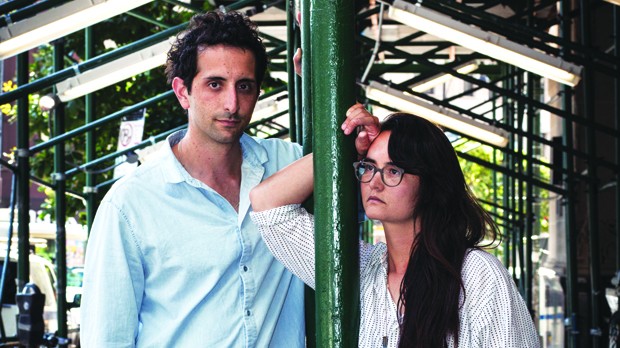 “We’ve never been comfortable with the term ‘satire,’” says Lev Kalman, one half of a filmmaking team with Whitney Horn. “We’ve always tried to figure out a word closer to what we are doing. It’s identifying with the characters much more than satire would, but we are also adding some layer of distance or context that is funny, highlighting the disconnect between them and their environment.”

Kalman and Horn met as undergraduates at Columbia University but discovered film later when the two autodidacts were gifted with a 16mm camera by Horn’s uncle. Aside from a trial run or two, they’ve since eschewed DSLRs and the video revolution. “We’re not musical when it comes to digital video,” explains Kalman, the de facto spokesman of the duo. “I don’t know what we could make that way.”

Though the two are committed collaborators — Horn photographs, Kalman occasionally handles sound, and they both write, edit, and direct — they haven’t lived in the same city since postproduction on 2009’s Blondes in the Jungle, which followed three self-absorbed white college kids in search of the Fountain of Youth in the Honduran jungle, with a supporting turn from a Mayan jaguar God. The 48-minute work’s parodies of didactic mythologies and archeology were partially informed by Kalman’s former post at the American Museum of Natural History.

Following Blondes’ run at Rotterdam and several underground festivals, Kalman and Horn spent the next four years working on their proper first feature, L for Leisure, from their respective homes in San Diego and San Francisco. Debuting in Rotterdam this year, L For Leisure’s episodic script features a bevy of attractive grad students discussing critical theory and “the end of history” in early’90s Iceland, France, and California. Here, Kalman and Horn let restrictions play to their advantage. Knowing they’d be making the film piecemeal over time, Kalman says they wondered, “How do we sit with a script for that amount of time and not hate all the jokes and get totally tired of it?’” The result was a “modular” process, with Kalman and Horn filling things in as they went, sometimes writing monologues the morning of the shoot, though they hardly seem off the cuff on screen.

Despite their deluded digressions — as well as the film’s subversive ’90s TV aesthetic and frothy synth-pop score — L For Leisure’s characters are unmistakably intelligent, musing about everything from postapocalyptic literature to race as a social construct.

Kalman and Horn’s upcoming projects include the short Peruvian Bodies, “a sexy detective thriller set in 1996” in the vein of Basic Instinct, and a feature called Two Planes and a Fancy, a 1890s travelogue featuring “a charlatan, a French geologist, and a dandy watercolorist, in search of the Southwest’s best hot springs.” When asked what they so deplore about modern day, Kalman laughs before offering, “We just like to make movies in a contained world, where we can eke out all the details.” — Sarah Salovaara