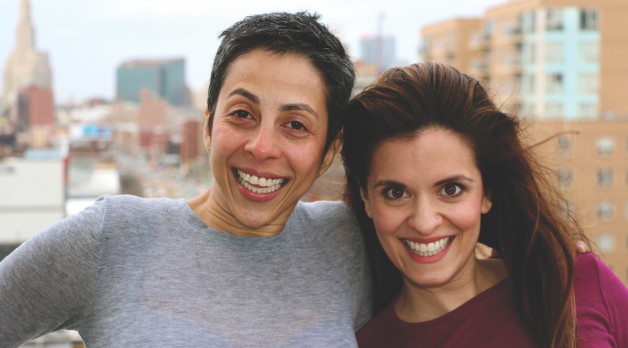 On the spectrum of fall film awards events, the IFP Gotham Awards sits on the slightly more irreverent side. But when Nadia P. Manzoor and Radhika Vaz accepted the Gotham’s first ever Best Breakthrough Series, Short Form award last November, they hilariously blew the roof off the joint. As their series’ eponymous burka-and-hijab-wearing Muslim characters, Shugs and Fats, they accepted the prize with a rollicking speech that had the audience both roaring and wincing. “Women like us, we don’t thank our families,” Vaz said. Continued Manzoor, “We ran away from our families so we could be here tonight!” Gesturing to their trophy, Vaz said, “We can use this to beat Donald Trump — but just lightly on the side.”

It wasn’t an automatic decision that the two would come to the Gothams in character. “We had our fancy black dresses and our burkas,” Manzoor explains. To give themselves the option of a quick bathroom wardrobe swap, “we were going to wear our fancy dresses underneath. But the day of the awards, we said, ‘Fuck it,’ and wore our pajamas underneath so we wouldn’t feel any need to change.”

Born in England and raised in a conservative Pakistani Muslim home, Manzoor says she came to storytelling “by accident.” “My background is in social work and policy,” she says. “I wanted to go back to Pakistan and talk about women’s issues in an activist way, but I was overwhelmed by academia. I then found color and life through improvisation.” “Being rubbish at everything else is what led me here,” writes the Mumbai-born Vaz in an email about her move to New York and decision to enroll in an improv class, which is where she met Manzoor. Both women have created one-women shows (Manzoor’s is Burq Off! and Vaz has toured Older.Angrier.Hairier. and Unladylike) and their online collaboration, Shugs & Fats, has just completed its third season.

“Walking the line between hipsters and Hijabis” is the show’s tagline, and each short episode collides these two observant Muslim women with contemporary New York fads and social life (juice cleanses, speed dating, Netflix-and-chill nights watching Fifty Shades of Grey). Manzoor and Vaz have rapid-fire comic rapport, with the fortysomething Fats (Vaz) frequently shutting down the more exuberant and innocent Shugs (Manzoor) with a withering observation.

Manzoor cites influences on Shugs & Fats ranging from the Comedy Central show Key and Peele to Broad City, Ali G, Inside Amy Schumer and the ’90s BBC sketch comedy series, Goodness Gracious Me. Season 1, which was all improvised, premiered in the spring of 2015. By the time of Season 3, which premiered as part of the 2016 Tribeca Film Festival’s Tribeca N.O.W. program, the show became more scripted with the two thinking, says Manzoor, “more critically about the content we want to create.” (All three seasons have been directed by Alex Mallis.)

After the Gotham Awards and Tribeca, Manzoor and Vaz have been approached by producers wanting to turn Shugs & Fats into an episodic series, so they’re working on that. And, as their audience grows, the pair are grappling with the inevitable controversy the show’s irreverent attitude towards its female Muslim characters creates. “We have had notes from folks saying they love that we are giving women a voice and maybe taking some of the edge off the Islamaphobic rhetoric,” Vaz writes. “On the other hand, I am not Muslim and some people think I am not in a position to play this character — that I am appropriating a culture that is not mine. I don’t agree obviously!” But, continues Manzoor, “People are interested in us being irreverent around what’s happening politically.” To that end, Manzoor says in a future storyline Shugs and Fats may be “investigating the real truth around Donald Trump. Is he a secret Muslim?” — S.M./Photo by Conrad Caton