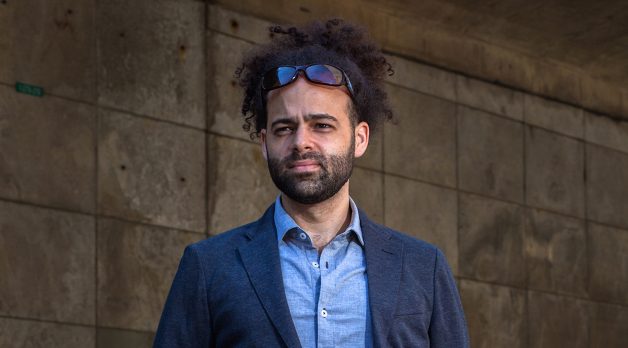 Growing up in suburban south Florida, Shawn Snyder was surrounded by his father’s enormous media collection. The walls were lined with VHS tapes and LPs, a collection whose “sometimes overwhelming” nature fed Snyder’s interests. When he got to Harvard, a new field of study suggested itself: “Because I was surrounded by my dad’s passions from the age of five, I knew that I wanted to be a musician and a filmmaker. But I also wanted to get a liberal arts education.” An advisor urged him to flip through the catalogue to determine his interests, and religion, Snyder says, “caught me off-guard.” It was Snyder’s dominant area of study at Harvard, in part as a way to examine his relationship to Reform Judaism, which he was brought up in (the relationship, he says, has “waned”). That background and the death of his mother fed into To Dust.

The script — Snyder’s feature debut, scheduled to begin shooting this fall — is a far cry from the character-based naturalism of the writer/director’s student shorts. Shmuel is a 48-year-old Hasidic father of two who loses his wife to cancer and becomes obsessed with determining exactly how long it will take her body to decay. His need for answers (tied to beliefs about decomposition’s bearing on the soul’s proper passage after death) leads him to Albert, a community college science professor barely qualified to assess the complicated variables that could affect a body’s decomposition time. He needs a cadaver to study, and idly says a pig would be ideal. Shmuel promptly goes off and buys a frozen corpse from a Chinese restaurant, the first step binding the two disparate men into an unorthodox scientific experiment. If the outline sounds like another unlikely friendship drama, the script (co-written with Snyder’s long-time collaborator and best friend Jason Begue) is an entirely different matter: a barely straightforward grief narrative is interspersed with the blackest of comedy, questionable treatment of animals and the lurking possibility of a dybbuk’s presence.

The idea was sparked when Snyder — now an NYU grad film student — attended a presentation by the Alfred P. Sloan Foundation, which awards grants to films highlighting the role of science and technology. One of their student programs — for which Snyder notes, “I am a proud poster child” — provides an incubation space and mentorship from scientists for a year-long program. Applicants start with a one-page pitch, then are winnowed-down to the five-page treatment stage and so on; the winning Sloan Student Grand Jury Prize script is awarded $100,000. The money itself couldn’t be the sole driving factor; the question Snyder asked himself was: “Was there ever a question I had asked myself that was scientific and also gut-wrenchingly emotional?” For Snyder, the timelines between a corpse’s decomposition and the highly ritualized mourning process overlap in a way that makes narrative sense: “It’s been seven days, what am I feeling? What does that corpse look like leaving the world at 30 days?”

Research included trips to a body farm in Tennessee, where Snyder hopes to film decomposition footage. On the religious side, ex-Hasids (known as “off the derech,” Hebrew for path) provided script spot-checking as well. But the lookbook — with images from The Night of the Hunter and the Coen brothers — makes clear that the script’s scientifically scrupulous swerves will be amplified with images and a tone following in a similarly idiosyncratic direction. — V.R./Photo by Richard Koek