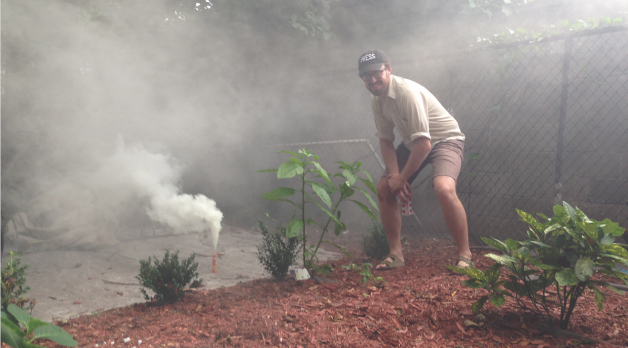 John Wilson worked as a private investigator in Boston for a year right after graduating from film school in 2008. “That was more of an education than anything else prior to that,” Wilson asserts. “I spent a lot of time watching and observing people without any barriers, and also without them knowing.” Inspired by his previous occupation, he started shooting in a style that he calls documentary memoir, capturing lo-fi quotidian images of people and places mediated by his distinct narration style.

Growing up in Long Island, Wilson’s interest in film began as a teenager when his dad got a home movie camera. At Binghamton University he made Looner, a short documentary about a tightknit balloon fetish community. He stumbled on the project while working on a short film about a strip club, whose owners became infuriated after discovering that Wilson was abandoning his initial project. Thinking that he was going to make a press piece for them, they locked him in a room and threatened him.

Inspired by the work of Les Blank, George Kuchar and Bruce Brown, Wilson was never drawn to fiction filmmaking. Working on narrative projects before college made him realize that he wanted to strip the filmmaking process down in order to make it as personal and cheap as possible. “I didn’t like the process of making an independent short film on such a small budget because I don’t like not being able to provide decent pay or hours for people to be working on something,” he says. Excited by YouTube filmmakers creating hundreds of videos for small audiences, Wilson began working on a series of how-to videos. How To Live With Bed Bugs began when he first moved to New York and his apartment became infested by bed bugs; he reasoned that this way, the situation wouldn’t just be a “net loss.” The film became a Vimeo Staff Pick, fueling more personal documentaries that Wilson uses in order to work through his own problems or insecurities: How To Walk To Manhattan, How To Keep Smoking, How To Remain Single.

When filmmakers Bill and Turner Ross asked Wilson to follow the production of their documentary, Contemporary Color, the resulting short film, Temporary Color (which premiered at Slamdance) is what he describes as a “true crime concert doc.” Stemming from his own anxiety as a documentarian, he cites the large crew and production of Contemporary Color as a trigger to explore what he would produce if he had the opportunity to handle a large production. His next project, How To Act On Reality TV, profiled the New York Reality TV School, which aims to teach individuals how to be better reality television personalities, and its instructor, Robert Galinsky. In this short work, Wilson cedes his usual narrative voice to his camera subjects. “If I’m not making a film that I’m narrating that means I’m probably doing pretty well,” he explains, “and I don’t need to work through some awful issue that I have.”

Wilson has a legally problematic short film circulating privately at the moment, one whose subject he needs to keep vague. Later this summer he’ll move to Las Vegas to work on a short documentary about the “spiritual life of wholesale goods.” “I don’t always go into it with a specific idea,” Wilson says. “Something usually happens, or I get really emotional about something, and then everything I’ve been shooting ends up becoming a part of it or having some kind of relation to it.” — Marc Nemcik/Photo by Elyse Winn