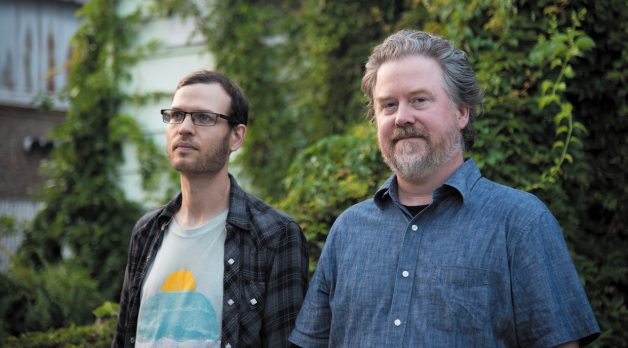 As climate change’s effects grow in potency, documentaries about their impending wrath multiply. And while most of these nonfiction works are well-meaning but artistically lacking issue docs, a few aim to educate and engage the viewer. The short films of Nate Dorr and Nathan Kensinger fit that bill, offering documentaries that put a piece of land’s past in conversation with its present, while knowing that its future can’t be guaranteed.

Sharing a passion for photographing hidden spaces in New York City, the two filmmakers randomly met over 15 years ago in the Freedom Tunnel, a dilapidated enclave located underneath Riverside Park. Kensinger was raised in San Francisco, Dorr in Maine, and the two found their way to the city via different routes: Kensinger as a documentary major at Hampshire College, Dorr as a neuroscience major at Middlebury. “I moved to New York in 2003 and was interested in exploring the neighborhoods, the waterfront especially,” Kensinger recalls. And while Dorr wasn’t a filmmaker by trade (he studied animal behavior as an employee of the Icahn School of Medicine at Mount Sinai), his extracurricular interests led him to photograph DIY concerts for IMPOSE Magazine.

After both worked in festival programming at organizations including the Brooklyn Film Festival and Imagine Science Film Festival, Dorr and Kensinger encountered a renewed itch to create ecologically driven works through an artistic lens. “Films that are too message driven will only end up getting their message out to people already looking for that message and don’t really create a conversation beyond that,” Dorr notes. Kensinger agrees: “I’m not a fan of films that are telling you what you’re supposed to think.”

Shoreline Change, a still-in-progress six-film project, observes specific New York urban landscapes caught in the crosshairs of developmental upheaval and sea level rise. In “Reclaimed Ground,” the subject is the transformation of Hunters Point in Long Island City. In “Managed Retreat,” three areas impacted by Hurricane Sandy are sold to the state and left to wild animals that roam the sidewalks in a new ghost town, awaiting the next uncontrollable rising tide. Of their disciplined visual style, Kensinger says that “both of us come from a photography background with a focus on still photography, and we were using similar equipment at the start of our collaboration. We both used the same camera.” Dorr notes that he still thinks “in a photographer’s way.” “I’ve used devoted video cameras at different times, both of which were constructed with nothing more than a DSLR still camera,” he says. “It was less about trying to recreate film with a DSLR and more about taking a still-camera approach to photography in order to create films, breaking them down into single frames and pushing that as far as possible, with long exposures, and carefully lining them up later on.”

The latest installment in Shoreline Change is “Urban Growth,” which made its world premiere at DOC NYC in 2020. Opening with interior shots of a seemingly nondescript supermarket, Dorr and Kensinger pull back and reveal their subject to be the newly opened Wegmans Food Market in the Brooklyn Navy Yard. Across the street, Admiral’s Row once featured a strip of homes occupied by the U.S. Navy. Equipped with a projector and a slew of photographs of the now demolished homes, the filmmakers project images of the block’s past atop the architecture that has since displaced these structures, the red storefront lights of Wegmans glimmering out of the corner of the frame.

Recent New York screenings have taken place under bridges, been projected on the sides of museums and, through the Waterfront Alliance, on the sides of ships in the historic Seaport District. “Each of our films has its own optimal format, and you have to find that, if you can,” Dorr says. “It captured the imagination of people who otherwise would have never seen these films,” Kensinger says, “and it was great.”— EL