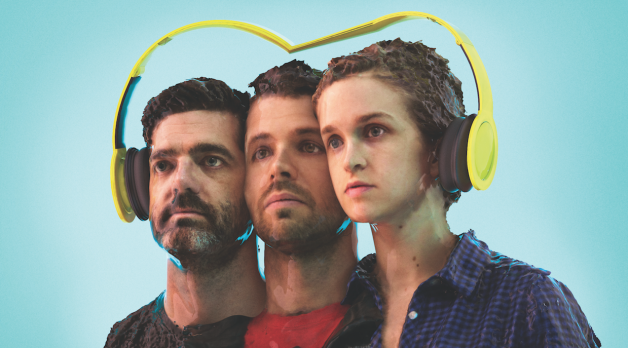 Over the last nine months, four arresting short works — two short films and two music videos for the electronic psych band Yeasayer — dropped on Vimeo from a new production outfit boasting a defiantly innocuous, almost retro name: New Media Ltd. An elegantly skeletal website — less than 100 words of black, san serif type on a white background — offered not much more than the Vimeo embeds and a link to the company’s commercial rep, Pulse Films. In a world where new companies burst on the scene with sizzle reels, fancy logos and open-bar launch parties, New Media, Ltd.’s unassuming branding is perversely attention getting.

But still: New Media Ltd? “When we were kicking around ideas, we really wanted to stay away from something like a ‘band name,’” answers Mike Anderson. “With a dumb corporate name, you can kind of hide in the background. You don’t need a memorable, Google-able name if the work is crazy and memorable. Maybe it is a little ironic — the faux-corporate thing — but it keeps us focused on the work rather than the brand.”

New Media Ltd. consists of the Portland-based Anderson and Brooklyn-based partners Abigail Horton and Ryan Dickie. Anderson comes from a production design background, Horton producing and Dickie cinematography and editing. They met on independent film sets and, nine months ago, decided to partner as a directing trio to make Night Stalker, a bizarre and near-uncategorizable short that had its festival premiere in the Midnight section of SXSW. Telling the story of bad Chinese food that sends its heroine into a nightmarish alternate dimension, Night Stalker combines giallo-lit live-action horror with creepily rough-hewn animation blending claymation and CGI — “like throwing motion capture onto de Kooning,” Anderson describes. “This was the first project we did together, and we all came at it with this ‘let’s make something so nuts’ energy that was really exciting and freeing,” Horton says.

The two Yeasayer videos, for “I Am Chemistry” and “Silly Me,” are similarly adventurous in their collision of animation styles. “Having little to no experience with animation before this, it’s been a total mind expansion for me,” Dickie says. “With the ability to move the camera in any conceivable way and light with painterly precision without the practical restrictions on set, it’s made me approach blocking and performance in a whole new way, especially when doing motion capture.”

But just when you’d dubbed New Media Ltd. the high-tech, lo-fi animation outfit, the company released their second short, Club Policy. A black relationship comedy, its biggest special effect is provided by two blue squash balls accidentally driven into the eyeballs of a perkily competitive woman by her smarmy, unapologetic boyfriend. Says Horton, the short is an example of New Media’s intention to “create a space where we can make whatever we want.”

“Hopefully in a year what you see will be totally different — related, but different — to what you see now,” says Anderson about New Media Ltd.’s next 12 months. “As we’re expanding into motion capture, facial performance capture and VR, the camera is essentially just becoming one of many sensors that capture live action, rather than the primary means. That said, simultaneously, we all have deep live-action backgrounds and love live-action films, so we’re using our CGI skills to do computer simulations and super-detailed previs for live-action shoots and practical effects. The road goes both ways.” — S.M./Photo courtesy of New Media Ltd.