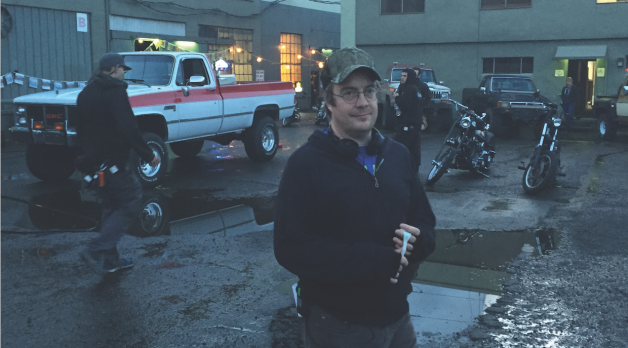 As a killing machine on the verge of a nervous breakdown, Macon Blair made a ferocious impression as the lead actor in Jeremy Saulnier’s 2013 breakthrough picture Blue Ruin. His follow-up with Saulnier was similarly blood-soaked, with Blair playing a neo-Nazi bouncer in this spring’s Green Room. But on the phone from Austin, Texas, where he is in post on his untitled feature directorial debut, Blair is disarmingly modest and politely low-key. “I feel like I got away with something,” he says of his good luck in getting his first feature financed and cast with the stars — among them, Melanie Lynskey and Elijah Wood — he had in mind when he wrote the script. And while there is crime and gunplay, his movie looks back less to ‘80s revenge movies than the kind of ‘70s, character-based neo-noirs — Night Moves, The Friends of Eddie Coyle, Charley Varrick — cineastes love and the studio system has long since abandoned. “It’s a soft-boiled crime story,” says Blair. “Everyone is very sensitive, and the stakes are low. And there’s an oddball romance quality to it, like Harold and Maude. Just damaged humans bumping around.”

In a world where MacGuffins can be nuclear codes or where backstory is provided, as in Blue Ruin, by antagonists who have murdered the hero’s parents, yes, the stakes at play in Blair’s picture may be modest, but they are also instantly relatable. Simply put, Ruth (Lynskey), a nurse at a care center for the elderly, has had a really bad day. Burnt out by the depressing rhythms of her job, she returns home to find her house ransacked. Stolen: her laptop and her anti-depressants. “What really hurts is the fucking violation,” she tells a friend later that night. “They were inside my house, you know?” When her cellphone pings the location of her missing laptop, Ruth puts together a tiny crew to get it back. But like Blair himself, his description of the film, related above, is modest. If the movie’s as suspenseful as the script, fans of Blue Ruin’s squirmy dread and violent reversals won’t be disappointed.

Born in Arlington, Virginia, Blair has acted in films since the early aughts. He lived in New York for 17 years and moved to Austin two years ago with his wife and son. And while acting predominates on his IMDb page, Blair says he makes his living primarily writing — pilots, TV scripts and screenplays. (In preproduction: his co-scripted adaptation of David Zeltserman’s novel Small Crimes for director E.L. Katz and another script due to be directed by Saulnier.)

What has Blair taken away from acting in other directors’ films? “If I know anything at all about making a movie it’s what I gleaned from being around Jeremy,” he says, citing Saulnier’s patience and his ability “to shut out everything that is not related to the shot” as the qualities he tried most to emulate. The hardest scene to shoot, he says, “involved coverage of eight different characters in one room. Everyone was yelling, there were special effects going off — a lot of moving parts. It’s 30 seconds of screen time and took a week to shoot. When I would feel overwhelmed, it was helpful to take a deep breath and a step back to say myself, ‘Just focus on this one little insert shot…’” — S.M./Photo by Lee Eddy