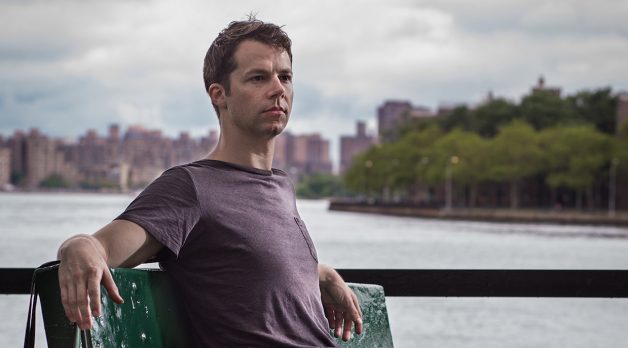 Brian McOmber’s transition from Dirty Projectors drummer to film composer arguably has a more “meet cute” slant than most musicians of his trade. Cutting a Pro Tools file aboard a flight to Seattle, McOmber sat next to filmmaker Hannah Fidell, who was working on her own Final Cut project. The two got to talking, and it wasn’t long before they were alternating production duties on each other’s shorts. “I was just interested in doing another creative project, of any kind, other than touring,” McOmber says. Already spread thin between his duties with the band and day job as a researcher in a science lab at Wesleyan, McOmber immediately took to the collaborative nature of filmmaking. “It didn’t matter what I was doing,” he says, “as long as I was a part of it.” Fidell, for her part, took advantage of McOmber’s musical prowess, enlisting him to score her short, The Gathering Squall, and subsequently her debut feature, A Teacher. From the very opening of that film, McOmber’s strings sound as a propulsive narrative force, parallel yet distinct from the tone of the picture, with its horror-tinged ambience. His work in A Teacher caught the eye of Trey Edward Shults, who hired him to craft the bold score for his breakout film, Krisha, released by A24 this past spring.

When McOmber is brought aboard a project, he likes to spend a fair amount of time getting to know the director so they can create a shared language. “What do they mean,” he asks, “when they say that they want something to be ‘emotional’?” Blanket descriptors, of course, can mean different things to different directors. A significant portion of McOmber’s process revolves around being given room to experiment. When scoring Drew Tobia’s See You Next Tuesday, McOmber pulled an outtake of lead actress Eleanore Pienta singing in the shower; he recreated the jingle with a guitarist and a bassist while he played the drums with his sticks held backwards to hamper any sense of fluidity. McComber avoids certain high-frequency instruments for dialogue-heavy scenes, but for Celia Rowlson-Hall’s near wordless MA, McOmber had plenty of room to go crazy with cymbals and gongs.

Musical collaboration, as it was within the Dirty Projectors, is a touchstone of McOmber’s approach. “If a director really wants an instrument,” he says, “my first instinct isn’t to try to play it myself; it’s to call up the musician I know who is really good at that instrument. I’m almost more like a casting director than a composer.” For Frances Bodomo’s Afronauts, McOmber had Jimmy Shaw from Metric take on synthesizer duties, and McOmber repaid him by drumming on a track. “No money was exchanged,” McOmber says, almost with a prideful sigh. When asked where he is based out of, McOmber stalls: “For me to take chances on films that I love, I have no choice but to really be homeless. I’ll score a film if you give me a free place to stay.” Thankfully, A24 should be providing him with some housing this summer when Trey Shults’s It Comes at Night shoots up in Canada. “Sometimes when the composer comes in at a later stage, the sound design and music can kind of become one,” he notes. “This time, I’m hoping to go to set and just pay attention to how the doors in the house creak and figure out how I’m going to be able to use that.” — Sarah Salovaara/Photo by Richard Koek