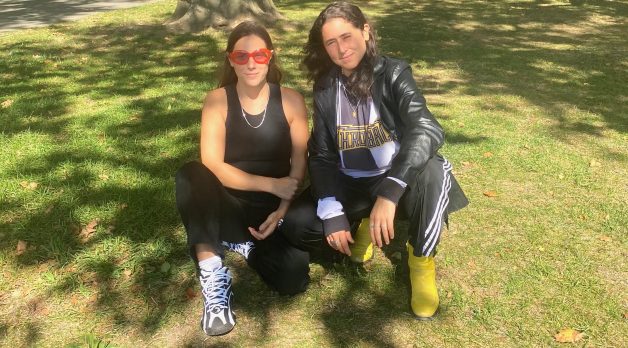 The eerie beauty of a deserted city, its affirming rhythms halted by an unseen virus. The ambient dread as friends become contagious vectors and discarded PPE litters the streets. The guilty divide between the work-from-homers and the exhausted essential workers. For anyone living through the pandemic’s early months in a sero-saturated metropolis like New York City, emotions came fast and hard. Offering a digital tonic amidst our quarantine doomscrolling: 2 Lizards, an eight-part animated series on Instagram Live by Brooklyn-based artists and filmmakers Orian Barki and Meriem Bennani. In the first episode, which dropped mid-March, the two shiny reptiles shimmy and sway on their rooftop to the melancholy sounds of street (and fire escape) jazz. “I’m kind of into this confinement thing, just having to stay home and do things I never had to do,” says the lizard voiced by Bennani. “In a fucked-up way, I’m loving this.” Replies lizard Barki, setting the series arc in motion, “That’s such a quarantine week one thing to say.”

Acclaim for 2 Lizards came quickly, via thousands of Instagram comments as well as the New York Times, where, in late April, they were dubbed “coronavirus art stars.” Yet by June, four episodes later, the Lizards said goodbye, swaying again on their rooftop. What happened? Explains Bennani, “We had been given this arc because of the pandemic. When people were starting to be less confined and the streets were more full, it felt like a different moment than when we started.” Adds Barki, “Because the city was so empty, we could shoot all these video backgrounds for the animation. But when the summer started, too many people were back out on the streets.”

Morocco-born Bennani is a visual and video artist whose work has shown at MoMA/PS1 as well as the 2019 Whitney Biennial. Barki is a director and editor who grew up in Israel and has directed short documentaries for Dazed and Fader, among other outlets. They’d start each episode with conversation. “We would try to abstract all the information in the news into a ’mood of the week,’” says Bennani. “Then, [we] would come up with a loose story.” They’d interview friends, who would voice the other characters. The cat ICU nurse is a real nurse, while a 2 Lizards fan, an actual newscaster, reached out to voice the mouse anchor who cuts the feed on the pig New York police chief during a BLM rally. Favorite movies inspired them: The empty Times Square episode references Vanilla Sky, the nighttime Brooklyn drive Taxi Driver. The filmmakers would do an edit with sound effects, shoot backgrounds, build locations using a 3D graphics program, do the character animation and source scores from musician friends. The first episode took two days, the last one week.

While Barki says 2 Lizards most likely won’t return, Bennani adds that “there’s something we spontaneously found together in terms of an animation technique and a certain tone that could be developed into another project.” The filmmakers say they want to keep documentary methodology and vérité observation in their future animation work. Industry people have reached out, saying, “’Whoa, love the 2 Lizards,’” says Barki, adding that the duo now want to “scale up.” But the biggest achievement may simply be—paradoxically for a series featuring animated animals—capturing those ineffable, very human early quarantine feels. “Because we were making it during confinement, everyone we collaborated with felt a cool, special connection,” concludes Barki.—SM