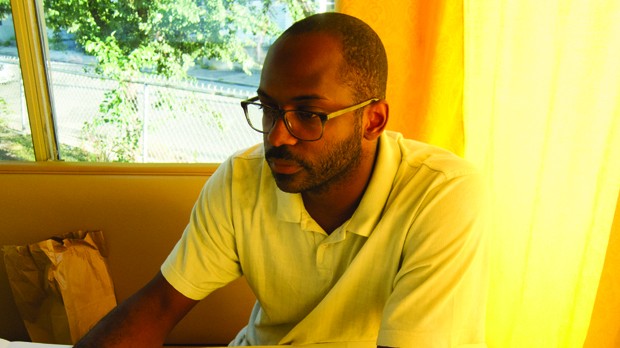 Writer, photographer and documentary maker RaMell Ross began on his path toward filmmaking when a planned career as a professional athlete flamed out. “I went to Georgetown University on a basketball scholarship,” he explains. “I was highly recruited and on everyone’s radar. But then I had a lot of injuries and three surgeries, and when I was a sophomore, I realized: I wasn’t going to the NBA.”

Ross then progressively turned his attention toward studying sociology and English literature (he cites Allen Ginsberg and J.D. Salinger as favorites), politics (after college he worked as a special assistant to U.S. Deputy Secretary of State Richard Armitage in Colin Powell’s office), and, in both Northern Ireland and Alabama, nonprofit community work. Along the way he took photos, and one day, they were spotted by ESPN. “‘You have a good eye,’” Ross remembers them saying, “and from there I started obsessing about photography. I started doing large-format work, and my career took off.”

Ross’s photography has been featured in The New York Times and on book covers, but these days he is concentrating just as much on making movies — a practice that he says hails back to his days as a ball player. “I played point guard,” he says, “so I’ve always looked at things in terms of movement and their relationship to what came before and after.” Ross was making “short films for fun” while managing a youth program in Alabama, and it was there he met Daniel and Quincy, the two young men he’s following for Hale County, his striking in-progress first feature. Capturing key incidents in the lives of his young adult subjects, as well as the in-between moments that are just as defining, Hale County has a vivid sense of place and emotional texture while avoiding the formulaic narrative tropes of much biographical documentary. On the funding circuit, the work-in-progress has already received support from Full Frame and the Sundance Institute, among others.

These days, Ross lives in Providence, R.I., where he moved from Alabama to attend the Rhode Island School of Design. He wanted, he says, “to add more of an academic undertone to [my images],” and Ross is indeed precise about both the politics of his representations as well as his artistic aspirations. “My film naturally extends from my large-format photography, which looks at my insider-outsider relationship with the historic South and considers the iconic use of the African-American body,” he writes in an email. “It uses recumbency, gesture, gaze and the actions of obstruction and concealment to incite interpretation and access to my fiction. Here, the tropes of skin are suspended in an arch of meaning to provide space to deconstruct our thoughts as they assist the decoding of the images.”

“In making this film, I want to commemorate Daniel and Quincy’s lives, exalt them and their plight, which is so often swept under the big American rug,” he continues. “I enter filmmaking as an artist who is wild about poetics and its emotional influence. The film is an ode to them and the Alabama South, from the centrality of our community, and uses immersive aesthetics in the form of ambling montages, fractured, organic and associative, to pose an alternate perspective — one that is meditative, sensory and accessible. How else can you translate the holiness of this region?” — S.M./Photo by Maya Krinsky