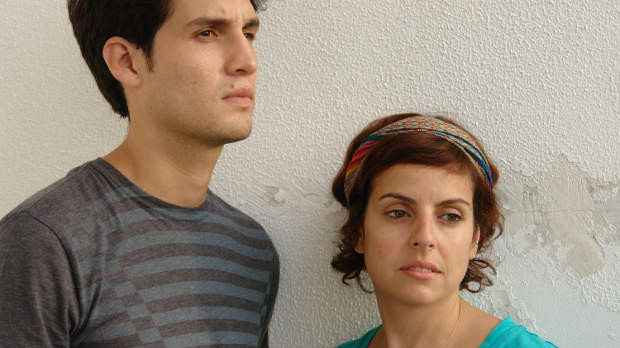 “Like a lot of partner dynamics, a healthy amount of arguing begins most of our working situations,” write Rania Attieh and Daniel Garcia from Karlovy Vary, where their evocative debut feature, Ok, Enough, Goodbye, is receiving its European premiere. “There is yelling and calling each other names. Then we settle down and begin actually working. Perhaps what makes our process work is the fact that we are completely unafraid to be brutally honest with each other about our opinions regarding each other’s ideas.”

Attieh, born in Tripoli, Lebanon, and Garcia, from South Texas, met in Texas in an undergrad drawing class. They both made it to New York, where Attieh did graduate work in media and film at City College and Garcia at NYU. A series of well-traveled short films followed, including Almost Brooklyn, mentored by Abbas Kiarostami. But, explains the pair, “We came to a point in our work where we knew we had to force ourselves to move into a new arena. We did not want to continue making short films, but we also did not want to sit around and wait for someone else to give us the opportunity to make a feature either. We realized that we were able to make a quality short film for very little money, in a few days, and by ourselves. So in theory we should be able to take a month working in the same fashion and make a feature. So this is exactly what we did.”

Shot micro-budget over 40 days and in 30 locations (including a tire burning scene in the middle of the city) with the two filmmakers as the only crew, Ok, Enough, Goodbye is an affectionate, observant and slyly funny ode to Attieh’s home city. Tripoli is viewed not with childhood nostalgia but with a keen documentary eye that captures the various changes — social, architectural, etc. — affecting the world of its fictional characters. “Tripoli impresses onto its people a sort of energy and overall attitude or outlook on daily life,” they comment. “Over the years this seemed to bubble up inside of us, producing a sort of love/hate relationship with the city itself.”

Telling the story of a 40-something momma’s man suddenly forced to face life on his own, Ok, Enough, Goodbye was shot using non-actors (friends and family of the filmmakers) and only a script outline, parceled out each day on set. After self-financing their production, the filmmakers received a Cinereach grant and SANAD funding from the Abu Dhabi film festival (where the film premiered) for their color correct and final sound mix — “the only two tasks we could not fill by ourselves.”

Of their future plans, Attieh and Garcia reflect, “We have never in the past considered ourselves filmmakers associated with a particular region of the world. We’ve made short films in Morocco, France, the U.S., and only lately have we begun exploring the Middle East. We are just attracted to making films in environments that inspire us. This usually involves us spending time in a particular place and being attracted to themes and notions of those places while we are there.” Upcoming, those places will include a small village in the Argentine Andes but, first, their hometown of New York. “We are currently seeking funding for a summer 2012 production,” they write. “We want to make a ‘city film’ that New Yorkers will recognize as their own and whose novelty foreigners to the city will be excited by.”— Scott Macaulay