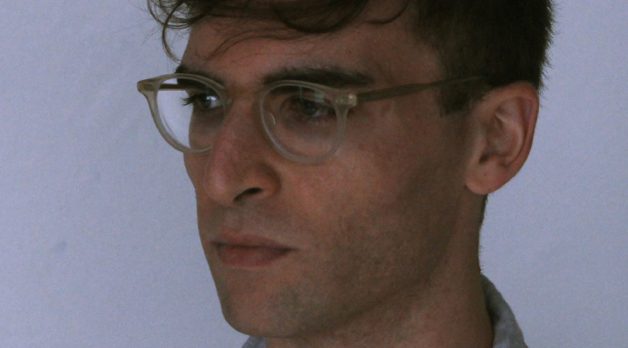 Currently in post-production, Ricky D’Ambrose’s first proper feature, Notes on an Appearance, tells — and withholds — the story of a young man, drifting in political circles, who disappears relatively soon into the film. First drafted in 2008, the feature further refines a style D’Ambrose has honed over a series of five ambitious shorts. When it came time to make Notes, the writer/director shrunk his “talky and rambling” 200-page draft into something that’s “much quieter.” He says, “I found a way to replace dialogue with street sounds — sounds of cars, sounds of air conditioning units, sounds of footsteps, or just a voice over a still image.” Taking the space of all those words in the resulting taciturn screenplay are storyboarded shots on the side of the page, illustrations that give a sense of a disciplined, honed gaze refined over years of self-tutoring.

Soon after completing his cinema studies master’s degree at Columbia, D’Ambrose shot his first short, The Stranger. “That was my pivot out of grad school,” he says. “Any illusions I had about going on to get a PhD were dimmed. I know that I’d rather work a day job and work on films and have them seen by people.” As a teenager on Long Island, D’Ambrose made VHS shot-for-shot remakes of The Shining and Carrie. “This was before I could go online and find transcripts or shooting scripts,” he notes, “so I was writing the script by listening to it, then stopping and transcribing. When I was shooting the movie, I couldn’t take screen captures, so I would have to pause and draw it and go again and make storyboards that way. It was a way of going to film school, by plagiarizing some other filmmaker It taught me how to make good decisions.” The process became good training for the shorts — including 2015’s Berlinale-premiering Six Cents in the Pocket and last year’s New Directors/New Films–premiering Spiral Jetty — which increasingly embrace a fragmentary form of bricolage narrative. Static shots of postcards, newspapers, books and paintings take on as much weight as the people in D’Ambrose’s economically told stories. “Economically” should be taken literally: Significant portions of his last two shorts were shot in D’Ambrose’s own apartment, fragmented and broken down into tables and walls that can stand in for multiple locations after careful application of sounds he’s recorded. “With Six Cents in the Pocket, I recorded a lot on my iPhone,” he notes. “With this film, I think it’s going to be a competition between things I find in a sound library and things that we record.”

D’Ambrose acted as his own DP and sound recorder on the shorts; Notes is his first experience with a crew of any size (including producer Graham Swon, one of last year’s 25 New Faces of Film). For now, the NYC resident has no plans to quit his personal-assistant day job, which “doesn’t put very many demands on me. It’s a way that I can segment my life so I don’t have to be so involved in what I do to make a living, because I want to be able to continue to make movies. Movies aren’t financially lucrative — at least the shorts — and this feature will not be.” — Vadim Rizov