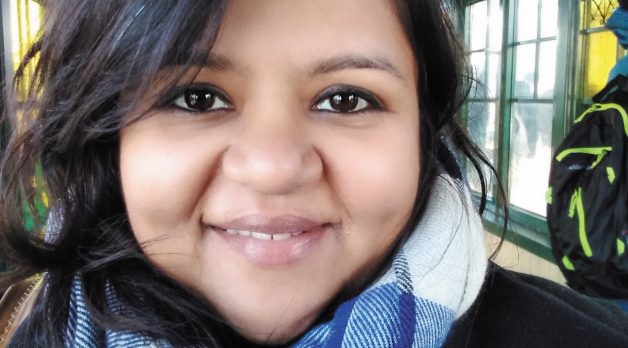 “A decisive woman,” Sushma Khadepaun muses, “poses a big threat to society in some way.” Over the sound of passing cars blaring music outside her Harlem apartment, she continues, “There is a desire to clip her wings before she may fly.”

Born and raised in the state of Gujarat on India’s Western coast, Khadepaun had a close connection to her family, and her upbringing was defined by binging Bollywood films. However, like many girls raised within male-dominated nuclear families, she has discovered in retrospect that these memories reveal the existence of a deeply ingrained gender bias. “I grew up in the ancestral home, and a lot of lovely and warm emotions stem from that because it was my childhood,” she says. “But there was also a very staunch presence of patriarchy.”

Alongside the sour truth of inhabiting a world steeped in sexism, she also grew to resent the dominance of Hindi-language Bollywood films, with her native tongue of Gujarati virtually nonexistent in Indian cinema. Her recent short film Anita—which premiered at Venice last year—is an appropriately forceful protest of these institutional shortcomings. The titular Anita (Aditi Vasudev) returns to her hometown in Gujarat for a wedding—her first homecoming since moving to America with husband Vikram (Mitra Gadhvi)—and nervously anticipates telling her family about a job offer she received back home. As expected, there’s severe backlash: Her mother frets over when she will have time to cook dinner for her husband, while her father accuses Vikram of not adequately providing for his daughter. Wounded by his father-in-law’s admonishment, Vikram takes his frustrations out on Anita—first by belittling her prospects, then by violating her autonomy.

For the entirety of an uninterrupted six-minute long take, Anita is pinned down and raped by her husband. Though she manages to inch her way toward her stash of condoms and implores him to put one on, Vikram blatantly ignores her request and penetrates her without protection. Though still considered legal in India (and only relatively recently outlawed in all 50 U.S. states), the marital rape depicted in Anita leaves no room for interpretation. (Khadepaun comments that it is nonetheless “very hard for people to say ’rape scene’” when describing it.) “I wanted to write about how abuse doesn’t exist in a vacuum,” she says. “I wanted to write about a place where there is laughter, joy and celebration—but there is also abuse in that same space.”

Anita is Khadepaun’s Columbia screenwriting and directing MFA thesis film, but the director has been helming shorts for the past decade (thanks in no small part to the production company she founded in Austin, Texas, in 2010). Her previous films, Rotten Egg (2018), Foren (2017) and Clay (2012), similarly interrogate womanhood and identity, a thematic preoccupation that she hopes to sustain in future projects. Her forthcoming feature debut, Salt, follows an ambitious young woman living in small-town India who spearheads her own arranged marriage with the intention of following her spouse to a supposedly more tolerant America—an illusion shattered after settling in suburban Texas.

Khadepaun is decidedly invested in dispelling illusions through her work, whether they revolve around politics or place: “I do come from a community where if you live in the West, it’s a sign of upward mobility and social status,” she says. “ “I’ve lived here for over 15 years, and it became this question of, ’Are you the one who got out?’ And what does the idea of ’getting out’ mean?”

Anita was originally to be set in America, with the director penning 12 drafts of the script before deciding to take the production to India. This was no minor modification—the lead actress had to learn Gujarati for the role (a testament to how few Gujarati-language actors exist in India), and the crew lost shooting days due to severe tropical storm conditions. Yet, the tribulation proves well worth the effort. By depicting the inescapable grasp of patriarchal subjugation in a hyper-specific location, Khadepaun makes an even more persuasive point. “I do really believe that universality comes from specificity,” she says. “And if I’m talking about a very specific community and how they live—and not just an Indian community—I want to be authentic.”— NK