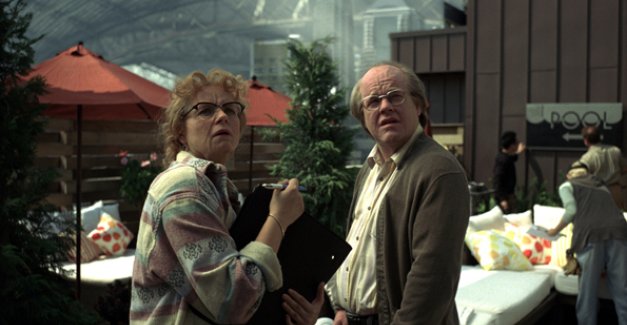 I think you have to see Charlie Kaufman‘s  “Synecdoche, New York” twice. I watched it the first time and knew it was a great film and that I had not mastered it. The second time because I needed to. The third time because I will want to. It will open to confused audiences and live indefinitely. A lot of people these days don’t even go to a movie once. There are alternatives. It doesn’t have to be the movies, but we must somehow dream. If we don’t “go to the movies” in any form, our minds wither and sicken.

The subject of “Synecdoche, New York” is nothing less than human life and how it works. Using a neurotic theater director from upstate New York, it encompasses every life and how it copes and fails. Think about it a little and, my god, it’s about you. Whoever you are.

Here is how life is supposed to work. We come out of ourselves and unfold into the world. We try to realize our desires. We fold back into ourselves, and then we die. “Synecdoche, New York” follows a life that ages from about 40 to 80 on that scale. Caden Cotard (Philip Seymour Hoffman) is a theater director, with all of the hangups and self-pity, all the grandiosity and sniffles, all the arrogance and fear, typical of his job. In other words, he could be me. He could be you. The job, the name, the race, the gender, the environment, all change. The human remains pretty much the same.

*Merriam-Webster’s Online Dictionary defines “synecdoche” as: “a figure of speech by which a part is put for the whole (as fifty sail for fifty ships), the whole for a part (as society for high society), the species for the genus (as cutthroat for assassin), the genus for the species (as a creature for a man), or the name of the material for the thing made (as boards for stage).”

*Synecdoche is pronounced: si-nek-duh-kee (with a stress on “nek”).

*Philip Seymour Hoffman‘s character’s last name is a reference to the Cotard delusion or Cotard’s syndrome, also known as nihilistic or negation delusion, which is a rare neuropsychiatric disorder in which a person holds a delusional belief that he or she is dead, does not exist, is putrefying or has lost his/her blood or internal organs.