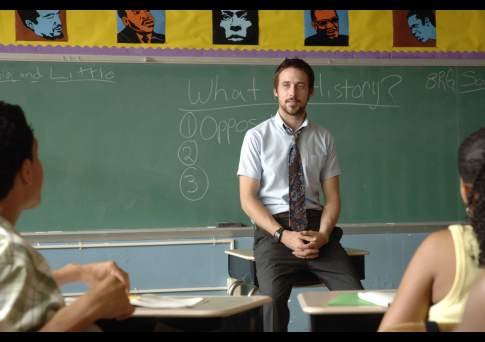 In the movies, and unfortunately in life, we tend to accept the easy falsehood that someone who behaves badly in one respect must be bad in others, even if they’re totally unrelated. So, if a person is a gambler, he must be a drunk. If he’s a pedophile, he must be a murderer. If he’s a cigarette smoker (in the movies, at least), he must be corrupt conspirator of some kind.

In a black-and-white world, human flaws are not allowed. In order to do good, a person must himself be a paragon of goodness. “Half Nelson,” the miraculous movie by Ryan Fleck and Anna Boden, is about a junior high schoolteacher who smokes. Crack. And the thing is, he’s a good teacher, even if (or, rather, because) he doesn’t always stick to the district-approved syllabus.

Dan (Ryan Gosling) wakes up on the hardwood floor of his apartment in an open short-sleeved shirt and white jockey shorts. And then he somehow gets himself to work, dragging himself up the stairs like an escapee from a George Romero movie. He’s wan and thin, and his bruised blue eyes look like they could roll back in his head at any minute. But once he gets started talking about the dialectics of power and world politics, he comes alive. Back in the teachers’ lounge, or alone in his car, for lunch, he’s halfway back to the realm of the undead again. Sugar approaches with tender care the story of a kid from the Dominican Republic who has a strong pitching arm and a good heart. Miguel Santos, known as “Sugar” because of his sweet personality, is recruited from the fields of dreams in his homeland by Major League baseball, and assigned to an Iowa farm club that is very, very far from home.

*The film was shot in 23 days and finished one day ahead of schedule.

*The film’s title “Half Nelson” refers to a wrestling hold in which one arm is passed under the opponent’s arm from behind to the back of the neck.
*Although it was produced and shot in New York City, the Toronto band Broken Social Scene is featured prominently on the soundtrack. Broken Social Scene even recorded some original music for the film.
*The Dan Dunne character was originally written to be in his mid-thirties. However, the filmmakers changed this to accommodate Ryan Gosling’s age. Gosling was 25 years old at the time of filming.
*The school used in the film (with the bright “Neon Celery” and “Key Lime” colored classroom doors), was painted by students from the school through an innovative nonprofit youth development program called Publicolor in NYC.