#5 “Beasts of the Southern Wild” 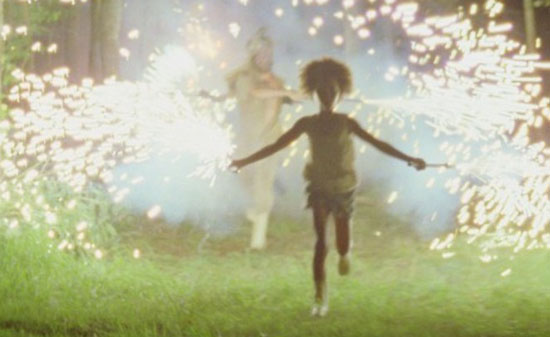 #5 “Beasts of the Southern Wild”

Movies have the power to transport us to different worlds.  Benh Zeitlin‘s Beasts of the Southern Wild transports us to a world we never dreamt before and beyond our imagination.  It is a world wrapped in poetry, wonder, and magic.  It is a work of breathtaking scope, vision, and confidence.  It is a story bursting with life and death, rage and tranquility, fear and bravery, and all of it delivered through a magnificent score, thoughtful cinematography, and on the shoulders of its child star.  It is an intellectual feast even though it sometimes leaves the emotional moments malnourished. But it is a movie unlike anything you’ve seen in recent years and it is a movie you must see.

Hushpuppy (Quvenzhané Wallis) and her father Wink (Dwight Henry) live in “The Bathtub”, a land unto itself on the other side of the New Orleans levy.  The people of the Bathtub pride themselves on their self-sufficiency and staying away from the cloistered, coddled lives of outsiders.  The world of the Bathtub is held together with scrap metal, wooden planks, and the spirit of its community.  The coming flood that will drown their houses and send them adrift is not the apocalypse but the beginning of a new odyssey.  Several story threads runt hroughout, but the film mostly examines daily life in The Bathtub and the new challenges and new revelations it presents for its young protagonist.

*More than half of the cast hails from Louisiana bayou country, including the film’s star Quvenzhané Wallis, and five others in speaking roles.

*The 65-member film crew included two residents of south Terrebonne Parish, Louisiana, where most of the filming took place: Mike Arceneaux, who helped with special equipment (especially boats), and Barbara Dupre in catering.

*The film’s story stems from a play by Lucy Alibar, an actress and playwright who makes a cameo appearance in the movie.

*The movie was financed by New York-based nonprofit ‘Cinereach us’, and forms the first feature-length project for ‘Court 13 Pictures us’.

*The film was the recipient of two San Francisco Film Society/Kenneth Rainin Foundation grants, one in 2010 and again in 2011.