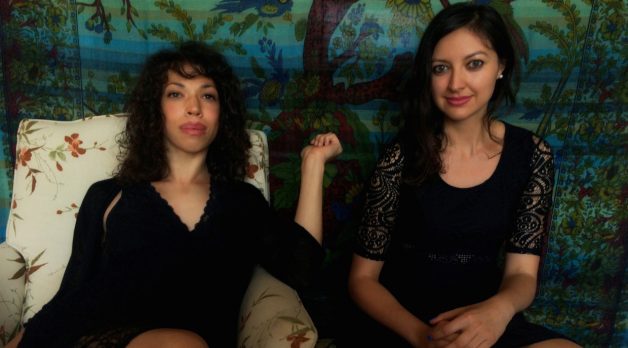 T.W. Pittman and Kelly Daniela Norris met at Columbia as the only two freshmen in their “Intro to Film” class, but didn’t start hanging out until senior year. They bonded over their shared taste in movies: Akira Kurosawa, Claire Denis and especially Chris Marker were common favorites. (“I could probably count the number of films we’ve significantly disagreed on one hand,” says Pittman.) They’ve known each other well for 10 years and started their production company Rasquaché Film Productions in 2009 in New York City.

Rasquaché is an (initially pejorative) Mexican term for, per Norris, “great art made from nothing,” which fits the duo’s working methods: “We are working with very small budgets and maximizing our resources.” The company is staffed by just the two of them, who so far have produced two features and one short. First came 2009’s Sinnerman, a short sketch of a young black teenager’s NYC life on a very bad day. Their next two projects took the pair far from the U.S. Norris took sole directorial credit for the 2013 feature Sombras de Azul, which she describes as a “melding of diary and travelogue.” A plot about a Mexican woman going to Cuba while mourning her late brother stemmed from Norris’s memories of her own dead brother, with whom she planned to travel there.

The film was made collaboratively with students from the Havana Film School, affirming the duo’s commitment to maintaining a heightened sense of representational awareness when making films abroad. “We’re both women of color; I’m a trans woman of color,” Pittman notes. “There’s a huge lack of representation in mainstream cinema. I think that perspective, as part of marginalized communities, very much informs how we approached [both features.]” This year’s Nakom takes place in northeastern Ghana, where Pittman had been stationed while in the Peace Corps; returning after five years away, she collaborated with local friend Isaac Adakudugu on a screenplay over the course of three months. When it came time for production, Pittman says, “We wanted it to look crisp, clean, almost classical. One of the big reasons was at a thematic level; so [many] Sub-Saharan Africa [films], films made by the West especially, tend to be aesthetically grim, shaky and communicate something about instability and deprivation. We wanted to bring a more nuanced view to this way of living.”

When his father dies, a young medical student returns to his rural hometown to fulfill his traditional duties as part of the burial process and is conflicted as to whether to return to the big city. Nakom’s story is simple; filming it was anything but. The film’s grounded, immersive and convincing rendering of an unfamiliar rural milieu was painstakingly achieved. There was no power in the village, so cameras were powered by buried generators. For postproduction, says Norris, DP Bob Geile “would designate time to go to a neighboring town that did have electricity and dump footage. We had some major scares: We didn’t have enough SD cards for the rate we were shooting and ended up asking a complete stranger from social media who answered our call for help, who happened to be going to Ghana.” The film (which will be distributed this fall by Corinth Film) was edited in Austin, where the team lived from 2011-15 (the duo are now based in California’s East Bay area), and premiered at this year’s Berlinale — where, as Pittman notes, she was, to her knowledge, “the first trans woman to have a fiction feature at Berlin.” Multiple projects are potentially in the works; for their next film, Pittman describes “a very gritty gender-bending noir set in a town in California that everyone hates called Modesto. The first two films we made were foreign-language. All of the subsequent ones are based in the U.S., interrogating American identity.” — V.R./Photo courtesy of Rasquaché Films