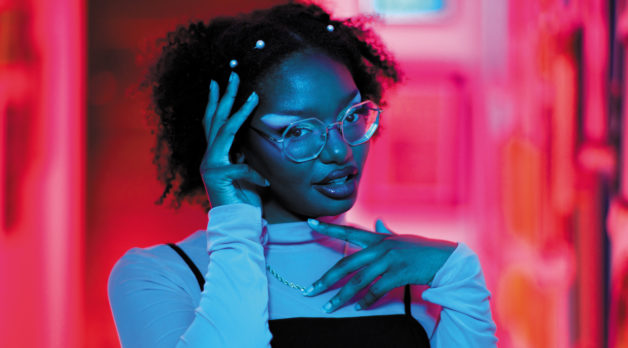 Before she even had the words for it, Xenia Matthews was making art in her grandmother’s garden in Melbourne Beach, Fla., crushing flower petals beneath her hands and fingerpainting with the resulting paste on the driveway. “She hated that,” Matthews remembers, “but I think back on that experience and realize I was never going to be anything but an artist.” The flowers, vegetables, mango trees and cacti at the site of her first creations—“The things that grow there, grow there wildly”—inspire her use of big, bright, saturated colors in her filmmaking today.

At the University of the Arts in Philadelphia, she made an installation film simulating an airplane ride to hell. In addition to color, light and sound, she played with smell, lining the oxygen masks the audience had to put on with sweet, citrusy smells, like a “soft blackberry” which got stronger over time. The idea for her first short, Stroke, made while in school, came to her while scouting locations for her second, Good Blood. She felt the “ghostly presence” of her late father, who was from Philadelphia, hovering over her. “He died of a stroke, so I used the physical things that happen within your body and brain when you’re having a stroke as the inspiration for the camera movement and performances. Then, I wrote the poem that’s over [the film] about my dad and how I feel about this lingering relationship we have.” She made Good Blood as a way to express her feelings about an abortion she had in 2019: “There’s a section in the middle that’s heavily inspired by images of red blood cells and the process of the pill abortion, which is the one I had. It’s basically like an induced miscarriage, so there’re a lot of sinking and space noises in there. I find it to be really beautiful.”

She shot her thesis film, A Few Things I’m Beginning to Understand, for which she won Indie Memphis’s Departures Shorts Jury award, near the beginning of lockdown, as professors were encouraging students to make personal films to reduce crew sizes. In addition to writing and directing, Matthews did the cinematography, makeup, production design, editing and even wrote and produced the original song in the film. “Maybe because it was a pandemic year, or maybe because I’m a Gemini and I talk to myself regularly,” she laughs, “[the film] materialized as this conversation with myself, using a channel-surfing mechanism to interrupt my own thoughts.”

“I feel very connected to the hands-on craft of filmmaking,” Matthews says. “It is nice to have help, but I do enjoy doing all that stuff.” But her latest short, Ourika!, was too ambitious for her to do everything on her own—although she did bedazzle some hazmat suits in addition to writing, directing and editing. The film was selected as one of four to be made in the BlackStar Philadelphia Filmmaker Lab, which provided her “everything you need to make a film,” including funding from pre- to post-production. The film is a surrealist, sci-fi “deconstruction” of the story of Ourika, a Senegalese girl enslaved by a French aristocrat, with considerable scale and maximalism. Although Matthews admits that she’s not a big movie watcher, she is inspired and excited by the cinematic excesses of films like Ziegfeld Follies and the mixed media styles and tones of Marlon Riggs. Ourika! premiered at the BlackStar Film Festival this year, and the artist is currently developing an installation version of the film, as well as her first feature, a culmination of all her shorts and ideas: “I always wanna explore the inside of the body, the inside of the mind, and how those things can materialize in a way that’s sparkly and fun.”—A.E. Hunt/photo by Christian Vasquez