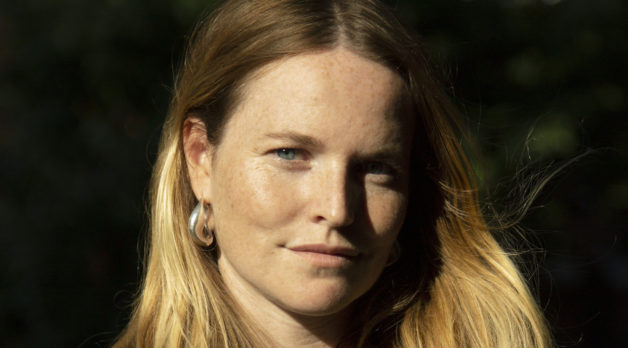 In January 2021, video artist Erin Johnson and film editor Charlotte Prager began a residency at Surf Point, Maine, in a house built in 1971 for artist Beverly Hallam and art collector Mary-Leigh Smart. Johnson didn’t initially intend to use the space as subject matter for her work: “I was just planning on editing another project while I was there,” she recalls, “but was quickly drawn to the history of the house and the architecture itself.” Rifling through the residence, she found a collection of slide photos of the house, photographer unknown; only one actually shows people, in the form of two women with their backs to the camera (presumably, if unknowably, Hallam and Smart).

The resulting short, To Be Sound Is To Be Solid, is an elegant, warm and lightly structuralist mapping of a space that echoes recorded conversations about mapping the ocean floor. “I was talking on the phone with oceanographers about their work in Seabed 2030—this mission to map the entire seafloor by 2030—while sitting in front of these enormous views out the windows of this house and started to see the connections,” Johnson says. To Be Sound’s repeated throughline is a shot that travels from one end of the house to another. The camera is very much embodied rather than weightless and was run, from start to finish, over the same route multiple times a day. “We had a doorway dolly,” Johnson explains. “We had the option to rent track and feel like we’re floating through space, or to use some kind of stabilizer. But I felt that it was important for the viewer to be able to feel the body of the cinematographer moving through the space—you can hear the creaks and the groans, the bumps of the doorway. You’re really aware of the fact that there is someone sitting on some sort of device, with lots of moments of slowing down and speeding up, and those moments being inconsistent. I was thinking a lot about the idea that these boats gathering seafloor data are going in and out of the same ports over and over again. So, we have a lot of data about some places, but not the middle of the ocean. The path that we created in the film doesn’t include 25 percent of the house, so there are things you don’t see because they didn’t fit on our route.”

Johnson’s work to date, including To Be Sound, displays a repeated interest in artists (“I have a lot of painters in my life,” she notes). In multichannel installations Tomatoes and Oranges, artists she knows pass back and forth before the camera while consuming the fruits in question. Inspired partly by artists like Wu Tsang, Vishal Jugdeo and Moyra Davey, Johnson perceives affinities with her work’s interest in communal dynamics and her pre-artist career as a “union and community organizer around labor issues, queer rights and food justice.” When she applied to Berkeley for an MFA, she was “interested in the school’s history in relationship to political movements.” The decision to move into video art grew from the organizing work, which had included “things that looked more like performance, actions that involved lots of people and often a theatrical or performative element.”

Johnson—who currently teaches at Maryland Institute College of Art—is also preparing To Be Sound to be presented as a five-channel installation in fall 2023 at Instituto Bardi/Casa de Vidro in Brazil. Nonetheless, “this film became a moment where I’ve been longing to participate within the context of cinema,” Johnson laughs. She’s “started thinking about the work as flexible, so that projects like To Be Solid can live as a short, single-channel work that works within the festival world but also can take on these multiple channels and iterations that are museum or gallery specific.” Working with co-writer Mireya Lucio, Johnson’s also currently in post on “a short film set in Cayo Santiago, a small islet in the Puerto Rican archipelago, where 2,000 free-ranging rhesus macaques live in the longest-running mammalian field site in the world.”— Vadim Rizov/photo by Genesis Báez