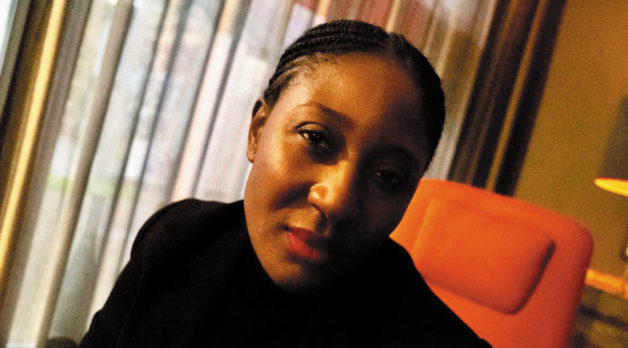 Ellie Foumbi attributes much of her cinematic awakening to a formative teacher at the French-American School of New York. Originally from Cameroon, Foumbi’s family moved to the United States when she was five years old, enrolling her in French-language schools to preserve her native tongue. From the ages of 10 to 15, each week she would watch in this teacher’s class, among other French classics, staples from the New Wave, World War II movies and Louis Malle’s Au revoir les enfants. “Growing up, movies just became the thing that I gravitated toward,” the writer-director says.

At the same teacher’s behest, Foumbi was first steered toward acting, a talent she fostered by starring in projects by, among others, Nikyatu Jusu, Rebecca Huntt and Christina Kallas. However, she eventually realized that she “wanted a bit more control” over the creative process and pursued an MFA in directing at Columbia University School of the Arts. Eager to deepen her technical knowledge and connect with other budding filmmakers, she initially found the school intimidating. “There was a lot of competition right off the bat,” she said. “Most of the kids that I was in school with had already shot films. My approach was, ‘I’m here to learn, find my voice and figure out what kind of filmmaker I am.’”

Shot in the south of France, Foumbi’s debut feature, Our Father, the Devil (Mon père, le diable), follows an African immigrant named Marie (Babetida Sadjo), who works as a chef in a premium nursing home. Her quaint life in the French countryside is harshly interrupted when a new priest, Father Patrick (Souléymane Sy Savané), is hired at the same facility. Hearing his voice delivering a sermon chills her—she recognizes it as belonging to the man who murdered her family and conscripted her as a child soldier back in Guinea.

Selected for funding through the Venice Biennale College Cinema in December 2019 just two months after she penned the script, the Our Father shoot originally was planned for the following April. Though COVID halted this trajectory, Foumbi found herself grateful for the extended pre-production period. (“The biggest gift that I got from that extra year was really being able to workshop the script with the actors.”) Separated from the Europe-based cast by the Atlantic, Foumbi rehearsed with them via Zoom for six months before shooting finally commenced in June 2021. The resulting chemistry is palpable: Sadjo and Savané perform a dance of mutual repulsion and allure, toying with expected power dynamics with each mounting confession of past violent acts.

While biding her time before production restarted on Our Father, Foumbi was commissioned by Netflix to write and direct a short film, Home, in conjunction with Film Independent. A tense depiction of a Black immigrant family moving into an affluent white neighborhood, Home was filmed in 2020 with a $10,000 budget. Foumbi believes that taking on this project before tackling Our Father was “the smartest thing” she could have done, effectively executing a dry run to better prepare for the restrictions inherent in shooting during a pandemic.

The 20-day shoot of Our Father was seamless, but post was rushed; the film wrapped on July 2, less than two months before the Venice Film Festival, where the Biennale College pictures traditionally premiere. The film played Venice as a work in progress and then, nearly a year later, in finished form at the 2022 Tribeca Film Festival, where it won the Audience Award for Best Narrative Feature.

Now, Foumbi is eyeing a “high-profile literary adaptation” for the screen as well as working on an expansion of her 2017 Columbia thesis film, Zenith—about an adopted Black Mennonite who travels to Philadelphia to meet her birth mother—into a limited series. In addition, she’s hard at work developing her next feature, Republik, a political thriller that is supposed to take place in Cameroon but “will technically be set in a fictional African country.” No matter the project, Foumbi’s directorial eye will stay rooted in the international French cinema that defined so much of her youth: “I don’t want to move the camera unless I absolutely have to,” she laughs.—Natalia Keogan/photo by Tim Bruening