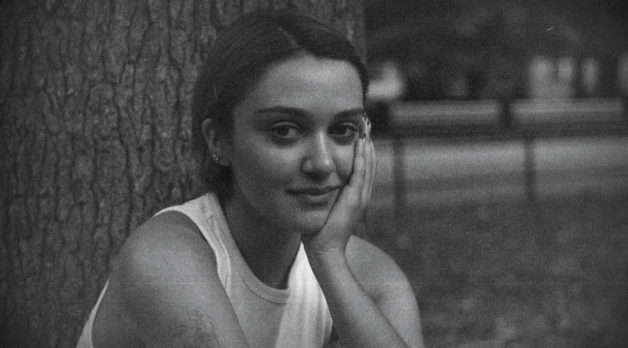 NY-based actor, writer, producer and director Ariela Barer knew she wanted to act from the time she was four. “I was asking my parents for an agent, and that confused them,” she laughs. Her parents allowed her to do children’s theater, and from a young age she worked steadily, appearing on shows like ER and New Girl while going to school. “I have been a working professional from a very young age,” she says. “I’m grateful for my experience working in this industry while also being grateful I stayed outside of it enough to take the time I needed to develop as an artist and create this path for myself.”

On shoots, such as on the Marvel series The Runaways, she’d “linger around video village, becoming friends with the writers and producers” and learning all the technical filmmaking terms. The culmination of all this work and study—Barer’s identity as a true multihyphenate—emerges spectacularly in How to Blow Up a Pipeline, directed by Daniel Goldhaber and a hit at the recent Toronto International Film Festival, where it was acquired by NEON following its premiere. With steely conviction, Barer plays Xochitl, the eco-themed thriller’s ringleader, moved toward an act of environmental terrorism after the death of her mother from cancer most likely caused by oil refinery pollutants. While she’s the urgent force pushing the crew’s other seven members, she’s also the one most clearly cognizant of the plan’s possible collateral damage. Barer, who’s also a producer and screenwriter on the film (the “film by” credit is shared by Goldhaber, Barer, editor Daniel Garber and writer Jordan Sjol), has “been active in LA environmental activist spaces for a while,” she says. Loving the ideas in Andreas Malm’s 2021 nonfiction book How to Blow Up a Pipeline, which the picture creatively adapts, she decided early on that “the human cost of an act like this had to be at the forefront of my mind as we went forward with the writing process. We can run with these ideas, but who suffers? It’s not always immediately the oil companies or the Exxon exec, you know?”

One initial idea for the ringleader character was “a very charismatic George Clooney type, but I realized that this 20-year-old girl who’s had so much loss in her life would never have the level of body and spatial ownership as [such a character]. The version I wanted to explore couldn’t be that. [Xochitl] is so fueled [by] and passionate about these ideas, it’s almost like she can’t stop herself from creating this [plan], even if, at the same time, she has no faith in herself.”

Barer says her involvement with the writing and producing processes shaped the way she approached her character. “It was almost an experimental way of working for me and nothing like I’d done before,” she says.

Co-authoring the script with Goldhaber and Jordan Sjol, Barer says she pushed for the crew to have eight characters and worked with her co-writers on defining the archetypes and politics each would represent: “For example, we wanted a rightwing rural character fighting for land rights. One day, I went home, took the archetypes and wrote out the characters with their names and vague backstories.” As one of the seven credited producers, Barer emphasizes that her producing role was a hands-on one, encompassing a full range of responsibilities, including budgeting, music supervision and much more, with casting a particular focus. “I kept pushing for a trust in actors to act,” she says. “If we haven’t seen an actor do what their role is asking of them, but we talk to them and hear their process and know that they’re someone who will commit, then we just have to trust them.” She also jumpstarted the financing by cold-approaching producer Alex Hughes while at a party with Goldhaber in Cannes, making a connection that led to Hughes being the film’s first financier.

Barer, who grew up playing bass in a punk band, The Love-Inns, has directed two shorts and is currently writing a script she hopes will be her feature debut, “a sci-fi thriller about a near future in a digital space.” With the new script and the success of Pipeline, Barer says, “I finally feel like I have ownership over my voice and my career, and I feel a sense of freedom and responsibility. I’m very excited just moving forward.”—Scott Macaulay/photo by Claire Wang