“I Want the Audience to Look According to Their Own Free Will”: Pema Tseden on Tharlo 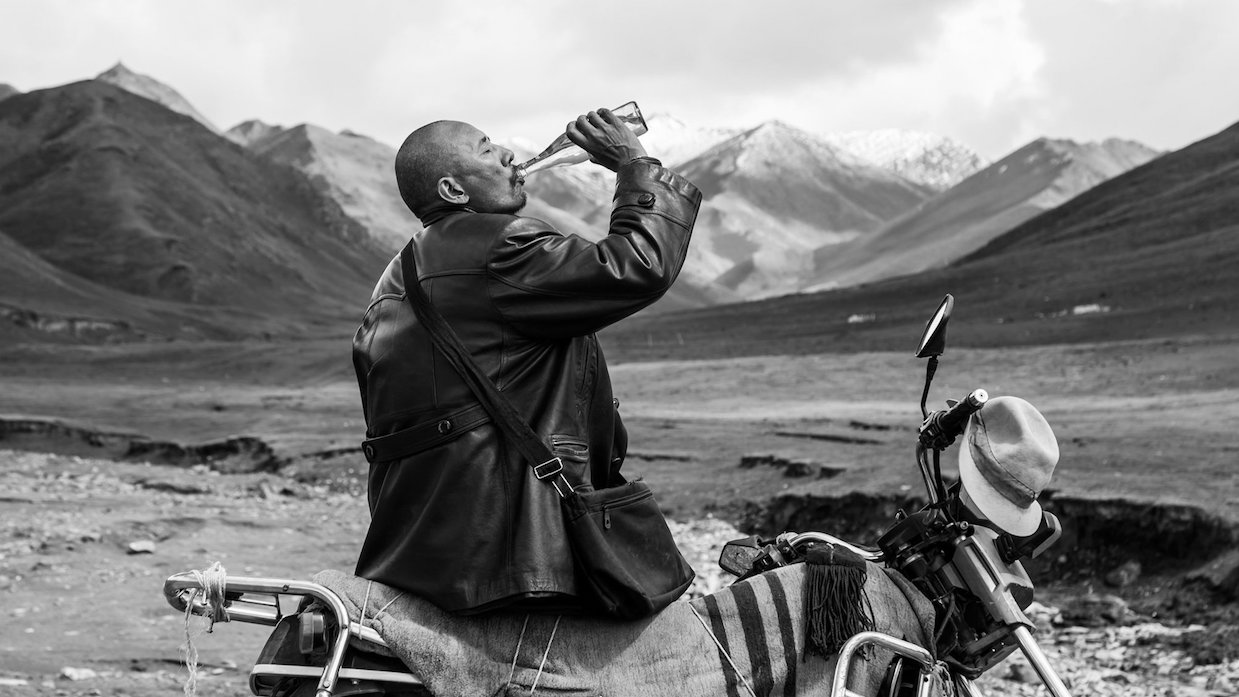 Pema Tseden’s new film, Tharlo, is a bit of a departure for the director. While his past films have focused on specific social units — a Tibetan buddhist monk community in The Silent Holy Stones, a film crew in The Search, a family in Old Dog — Tharlo is a film that centers around an individual, the titular sheep herder with a ponytail. On a trip into town to get a new ID, Tharlo (Shide Nyima), who lives a solitary life in the mountains, is introduced to urban life by Yangtso (Yangshik Tso), an attractive short-haired girl who works at the barbershop. The film tracks the subtle changes this trip and encounter effect in Tharlo as he finishes his errand and goes home; Tseden patiently reveals his vision of the corruption of a man.

Tseden says circumstance, rather than deliberation, motivated the new directions that the film seems to stake out: of the scripts he’s handed to the censorship bureau in Beijing, Tharlo happened to pass. But much of Tharlo might surprise fans of Tseden’s previous work: shot in black-and-white, with a surreal visual edge to compliment his comic-absurdist narrative, the director expands his style with confidence. He talked to Filmmaker about the creative challenges behind making Tharlo. Thanks to Maya Yu Zhang for translating the transcript and to Chengzhi Jin for helping with the interview. Tharlo is in theaters now from Icarus Films.

Filmmaker: Where does the story come from?

Tseden: It’s a novel of mine that I adapted it into a screenplay. There are some differences between the two. I added some things. The concept for the short story appeared with an image, a man with a ponytail. Then I wrote a story and tried to contextualize this person a bit. I work differently when writing stories for novels than for films. Inspiration is crucial for novel writing, most often for screenwriting as well, but they differ in methodology.

Filmmaker: What’s the relationship between Tharlo the novel and Tharlo the film?

Tseden: They are one at core — the film preserved the central motif, the emotions and the theme of the novel, but film demands different modes of expression. In the novel there aren’t extensive descriptions of Tharlo’s solitary state in the mountains — that whole section was just one sentence. The film accentuates it by adding details. There needs to be foreshadowing in the film to help people understand the choices each character makes in the end. For example, the scene in which his sheep are killed by wolves is absent in the novel. I needed to present a somewhat multifaceted life for Tharlo to justify his change in the end.

Filmmaker: The visuals for this part are very strong. Did you have the place in mind prior to shooting?

Tseden: More or less. It’s my hometown and I used to herd sheep there when I was little, so I know the place well. The scene is set in spring so the wind, the desolation of the space matches the ambience. Therefore we opted for black and white instead of color.

Tseden: Yeah, it’s a formal exploration. Maybe the scenes that include mirrors have more surrealist feelings. Tharlo in mountains is a real person with real feelings but once he goes into the city this realness disintegrates and the city becomes an illusion. The encounter between Tharlo and Yangtso, their love are also illusions which is why mirrors are employed to express these elements. The design, intention and meaning of the mirrors at different points varies.

Filmmaker: You mentioned that Tharlo and Yangtso’s love is an illusion. Soul Searching (The Search) also touches on this type of illusional love. I wonder if illusional love acts as an element in your works.

Tseden: Depends. The sentiments in Tharlo are also real. Yangtso has real emotional impulses. For example when she sees Tharlo putting money down on the table, I think Yangtso is moved and I made sure that the performers knew to express that. Soul Searching provides more reflections on love, as well as Buddhist ideas such as non-attachment and release from sufferings. For example when the boss accounts his love story it’s painful for him but he told the story in a very light tone. This attitude is important. Therefore we asked him to tell instead of enacting the story. The state he was in matters a lot. Maybe Tharlo is more realistic.

Filmmaker: As for sound design — is there a score for the film?

Tseden: Yes, we collaborated with a composer but didn’t have too many intentions for the music since we just wanted it to brings out the mood. It’s not decorative, it’s part of the emotions. I had used a score before for another film of mine, but nobody noticed!

Filmmaker: What role does humor play in your film?

Tseden: I consider it a writing technique — how to sketch out dialogue to make it engaging and not boring. It’s also part of Tibetan cultural tradition, since lots of them incorporate humor when communicating. Sometimes the humor could be off color but it’s quite normal among Tibetans. It’s connected to the motif of the film as well as the design of dialogues. Tharlo’s past could be hinted at or mentioned instead of being thoroughly drawn out in the plot. Perhaps the sad elements are quite intense and dominate, like smiling while crying. When telling a very sad story, incorporating funny elements could intensify the sadness, whereas portraying suffering with tears could just be … annoying. You need a fulcrum for support.

Filmmaker: The long takes reminds me of theater. Is there an intentional connection?

Tseden: No. It has more to do with the film’s content, or my wish to present something rationally and objectively. Tharlo is just one individual,  so this approach works better than mobile camera or rapid cutting.

Filmmaker: How do you want your audience to react to these long takes?

Tseden: I think people could choose what they want to focus on according to their own free will. For example in the karaoke scene, some people focus on Tharlo’s face, others the balloon or even the wallpaper. It depends on the viewer. I do have a personal vision of what I want to present, but I don’t wish to impose. I want the audience to look according to their own free will.

Filmmaker: And your actors are…

Tseden: They are professional actors even though they may come off as non-professional. Tharlo is a comedy actor who’s quite famous in the Tibetan region. I had him in mind when writing the screenplay because he has that ponytail. He’s close to the character from the very beginning. This character was a challenge for him. He felt out of character when we cast him, but as we went along he felt closer and closer to Tharlo, especially when in the mountains.

Filmmaker: In the end there’s a scene when Tharlo shaves his head, which is a crucial take. What preparations did you do?

Tseden: Lots of preparation! First of which was persuading the actor. He had kept his hair for about 17 years. Even though he really liked the character, it still took him 2-3 days to consider the sacrifice he had to make. The female character learned to cut hair. We found some people before and during the shoot for her to practice on, so we had quite a few shaved heads in our crew. We rehearsed quite a few times. We had two to three clippers. We would stop as soon as we detected any problem, so we didn’t have sync sound while shooting; it was added on in post.

Filmmaker: So overall there were lots of rehearsals involved?

Tseden: Yes, basically. We would let actors read the screenplay first. Tharlo is a character that requires lots of control. The actor is used to dramatic comedy acts, so we had to follow him closely and tame his dramatic gestures. His voice is also very performative because he has done voice acting before. It felt off. We needed to ask him to speak in a conversational tone, but there are some scenes where you could discern traces of his dramatic habits.

Filmmaker: However, I think it adds a layer to Tharlo, because his performance is so idiosyncratic and therefore more colorful.

Tseden: Exactly. I think he did a great job. Lots of people think he’s a non-professional actor or a real shepherd. He’s had similar life experiences, so he brings his personal understanding to the character.

Filmmaker: Tharlo is your first work that focuses on one individual. Why this film now?

Tseden: No particular reason. I had a draft of the screenplay which happened to be approved (by the censorship bureau)… there’s no particular pattern to the way I create.

Filmmaker: Happened to be approved?

Tseden: I didn’t think it would because of the context of the story. I just thought I should try. When I was writing I had the censorship system in mind, but it doesn’t necessarily inform my creative process. For example, I wanted to make a film about revenge called Killer, which tells the story of a person who wants to avenge the murder of his father but ended up forgiving the killer. That story wasn’t approved but this one was.

Filmmaker: I think the last scene of Tharlo was quite powerful. [spoilers follow] How did it come to you?

Tseden: It needed a special place, so I visited lots of sites. The snowy mountains you see from afar suit the mood of the story. Usually the end of a story is the most challenging for me. I formed many conclusions and speculated about many possibilities for Tharlo. He could find the girl and seek revenge or he could commit suicide. We actually shot an ending where he was hit by a truck on the highway, with sound effects of car brakes to make the audience assume that he is dead.Many people suggested similar things but I felt they didn’t go far enough, and this is the one I came up with. The firecracker in his hand was very vivid when I wrote (the scene).

Filmmaker: Although lots of emotions are suppressed, the last scene really gave Tharlo some sort of power, I think. What do you wish to communicate through that scene?

Tseden: That this is all that Tharlo’s able to do. He’s not the kind of person that could seek revenge and get his money back. All he can do is to punish himself. That’s all.