Dispatches from the Frontlines of a Studio Picture, Part 1 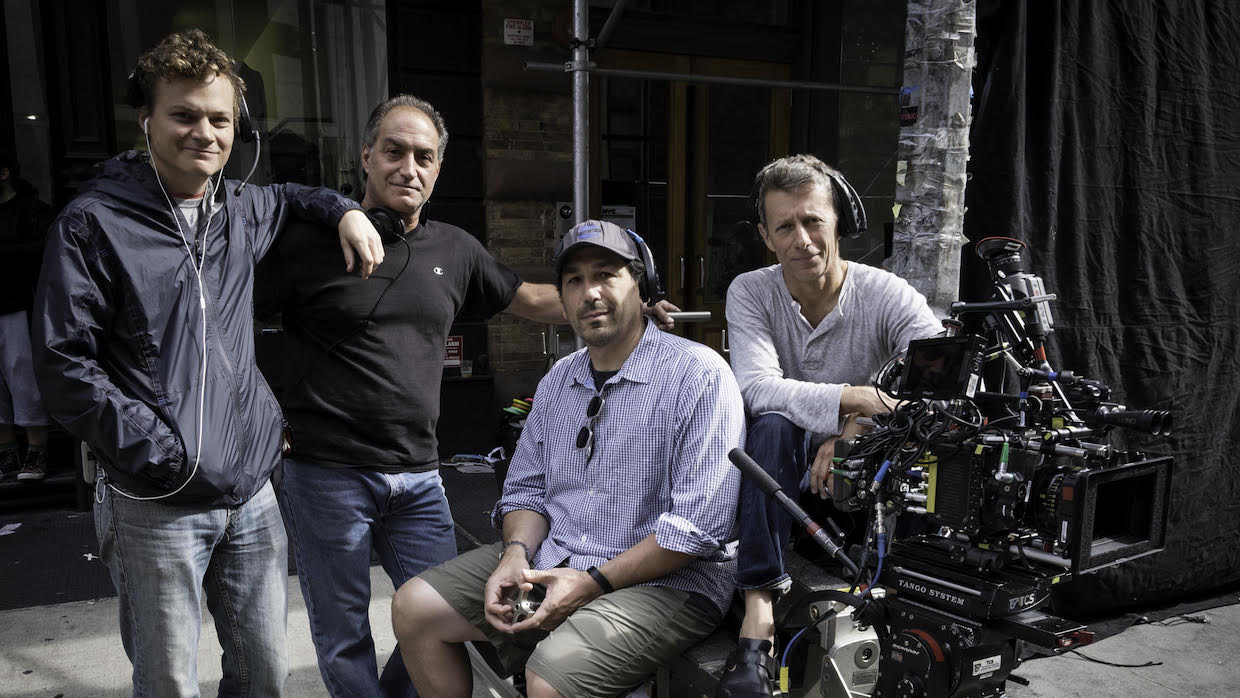 Not that long ago, and certainly on my last feature, I would often find myself joking with the gaffer or the key grip: “So if this was a $20 million film, what would we do differently?” Most of the time the answer involved big lighting cranes, custom lightboxes, technocranes and time. Lots and lots of time. On an indie, we are constantly pushed to produce more with less. Thirty-five-day schedules are becoming 28-day schedules. Eight million dollar films are being produced for five. The bar miraculously remains the same — you simply need to squeeze more juice from a smaller fruit.

If you are below the line on an indie film right now and this story sounds familiar, I have news for you: the studio world isn’t as different as you think. There may be more shooting days, or more money for certain aspects of the production, but the ratio of ambition to resources remains the same, if not greater on a larger film. It’s hard to imagine what it’d be like to have over 100 shooting days and a $250 million budget, as the folks making Batman v Superman had, but I can assure you their days were no less stressed and the ask always seemed to be just outside the realm of possible. Considering the last feature I shot in New York just a few years ago could have been made 400 times (I’m not exaggerating) for the budget of my first outing with a studio, I was shocked to find that at the core, my directors on lower-budget films and I deal with the same issues, just on a different scale.

Over the last few weeks I’ve ventured into the deep end of studio filmmaking — outside of my comfort zone with an evolving and revolving sense of gratitude, panic, anxiety and bewilderment. There’s too much to talk about, so here goes just the first batch of lessons I’ve learned along the way.

First of all, when I romance about working on a studio film I imagine a lengthy preproduction process, with lots of time to scout, shoot camera tests, evaluate new gear, share references and palettes with the production designer, fine-tune sequences with a storyboard artist, draw up plots with my crew and, of course and above all, spend weeks with the director. If you are making an ambitious movie with a larger budget, bigger stunts, more locations and movie stars, it’s even more important you have your shit together, which takes time no matter who you are. Why I was brought in just three weeks out from production on my first studio film is beyond me, and why I said “okay” is a more troubling question. It meant that all my time was sabotaged by emergency-status logistics, like finding a crew, getting orders together, negotiating equipment and personnel and vendors with the producers, all while we were stuffed in a van every day trying to make hard-pressed decisions on locations with a week till the tech scout — all things that were going to critically impact our chances of success, at least on a production level. The director and I had so little time together, to the point that we’d sad-joke about it as we passed each other in the hallway at the production office. The only remotely meaningful work we got done was after 8:30 p.m. following a long and tiring day.

Now a few weeks into the shoot I’d say we’re doing fine and remarkably seeing things eye-to-eye, but I know it’s those moments when we are outside of the hustle where discoveries are made, and learning to fight for that time is important. Looking back at my short and brutal prep schedule, I’m not sure how I could have done it better — except I’d say to someone in my shoes: really hold fast on things you feel are important. If you don’t stand your ground firmly on issues, it will just cost everyone time. Sometimes trying to be flexible means more meetings, more compromises, more time only to realize that no, there’s no other way to do it. And you knew that from the beginning. In the same turn, put your faith into those around you; on a studio movie they are all highly experienced, most likely more than you. Micromanaging will also cost you time you don’t have.

Think big and small. At the same time

This has been an ongoing challenge for me, and I think good DPs really get this concept. I should have it down pat as my roots are in documentary and very small films, but when you walk onto a big film you can lose sight of those instincts from time to time, and often it just means a bit of strategic planning. Without getting too nostalgic, many years ago I was a gaffer/grip on a small film working with a DP I really respected, arguably at the top of a very small list of mentors (as they weren’t in abundance in Seattle!). It was very early in my career, and he was always taking chances on me in various departments. We were sprinting, literally into a field, heading into the end of the day to capture some moments at dusk. I was trying to keep up with camera support and had only brought a handful of boxes, sandbags, etc. As the light was fading, the DP turned to me and said, “Bring the bounce, quick.” I felt equal parts embarrassment and panic. “I don’t have it here.” Disappointedly he listed a handful of things that “should always follow the camera.” Okay, maybe we weren’t on a $20 million movie, but I learned many important lessons on that project, and in those moments the stakes can feel just as high.

Flash forward 10 years and I find myself on a beach, at night, with equipment and people everywhere while under the gun to photograph a not-so-simple scene with our five leading ladies, and, as usual, ambition soars above resources. In these cases you have to think big — as in big sources far away. You don’t want to paint yourself or your director into a corner by keeping things small. Too many times I’d have a 12x set up just off camera and the director would say, “Could this character walk into this shot? Or run out? Or can we go wider?” “But I thought this was just a close-up!” I’d say to myself. (To the director it was always, “Sure!”) No matter what you do in this situation, you’ve either compromised your photography or compromised the director’s vision. Not a sweet spot to be in. No problem, you just light large areas. Always think big, right? But we’re only a few minutes to wrap and the director says to me, “I’m not going to get this other shot if I can’t roll on it right now.” So I swing our Steadicam Op around the other side, and I’m just not lit for it. I look around at the lighting crane and big frames scattering the beach, and I don’t quite have it. I just needed a bounce, really. We rolled it anyway because we had to, and I felt like I didn’t fully deliver on that shot.

Immediately afterwards I remembered the words of my Seattle DP mentor. I grabbed my gaffer and key grip and gave them a list of things that should “always follow the camera.” It doesn’t matter how big or how small the show, sometimes it’s the little things within arm’s reach that make the shot.

Almost every film I’ve ever worked on had some element of comedy. Humor and pathos go hand in hand in life, and so it follows that they do in cinema, too. Most of my favorite films have both in abundance, and you can’t really call them anything so you call them “dramedies.” But really they are just films about people and all the good, bad, sad and funny things we do to ourselves and other people. In my mind, I’ve never really separated the two. All I knew is that traditionally I wasn’t drawn to broad comedy as a genre in part because of its apparent habit of stripping genuine pathos from its storylines in favor of getting more laughs and more seats filled. Don’t get me wrong, I love funny movies, but the bar can sag pretty low when the film’s priorities are focused on one thing only. Not to mention that as you shift away from the darker sides of the human experience, the lighting follows suit. I like films in the middle because I can happily work in a slightly exaggerated version of reality, whereas broad comedy tends to forget shadow and the unknown in favor of flat, high-key, show-all-your-cards lighting. (This is a generalization; I admit I’m being unfair to a handful of DPs and directors pushing this genre with more sophisticated storytelling.) But, nevertheless, when the opportunity presented itself for me to do a “dark comedy,” I felt like it was a chance to work in a style well outside of my comfort zone. And I was right!

My biggest lesson walking into the comedy landscape is that it’s simply a different animal on set. While shooting a dramedy, or a thriller, or just about anything else, you typically stay pretty close to the script, and design the visuals around the desired impact of that moment, or to underscore the subtext, etc. Sometimes you’re following someone from behind because you don’t want your audience to fully know your character’s intentions. Or you put your character into silhouette to emphasize the moment they’re realizing they’re no longer relevant to another character. You employ visual metaphors to push the story in certain directions, and it’s more like the actor, the blocking, the lighting and the framing are part of a dance, with the result being greater than the sum of the parts.

With the comedy genre, this still exists, but to a much lesser extent, because most of the heavy lifting is done by the actor. Shots can be funny, and lighting can help, but your goals are different: show off the performance. And rather than the words of dialogue being draped over a shot doing many things at once, here the words are king, and every line is an opportunity to elevate the comedy of that moment. For just about every scene on this film involving a group of five friends, everyone plays an integral role in either setting up or landing the nonstop flow of comedic moments. We’re shooting wides and sub-masters just to get us warmed up for full rounds of coverage, each with a stream of alts supplied by the director, actor, writer or the many revolving “punch-up” writers on set. They’re trying lines out, riffing, improvising. Some of it lands and some of it doesn’t, but the process is all about mining until the scene has run its course. It’s a game of stamina, and not what I was prepared for at all. And to support that effort, you have to light incredibly quickly and/or globally, throw in more cameras and give the director as much time as you can. At moments (some more than others), the blocking, the lighting and the composition are secondary. There’s a bit of a handoff there. And I totally get it.