“That Feeling Inside You That Never Explodes”: Lucile Hadžihalilović on Evolution 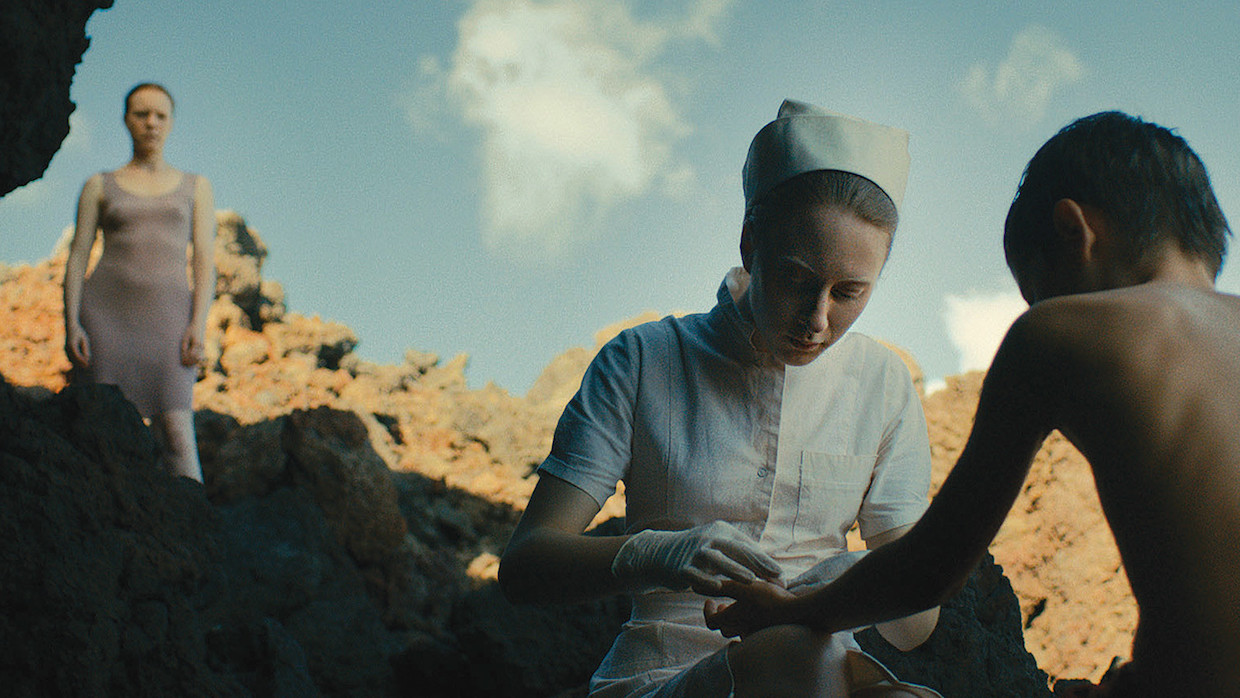 Lucile Hadžihalilović’s Evolution is her long-awaited sophomore feature; her first, Innocence, premiered in 2004. At the time of Evolution‘s premiere, I wrote:

Innocence followed a group of young women being schooled in etiquette, beauty et al. at a vaguely sinister private institution, preparing themselves to be sexualized for a lifetime before an implicit male gaze; Evolution gender-switches the sexual fears attendant to puberty. The setting is, again, an isolated incubation facility, this one for the grooming of young boys. Nicolas (Max Brebant) is one of many interchangeable blond youths (the vibe is very Village of the Damned) being raised by an equally interchangeable group of orange-haired mothers (?) in a dilapidated series of buildings by the coast. The real-world location is Lanzarote, in the Canary Islands; given the French dialogue, the feeling is very much of abandoned colonial holdings gone to seed but still plotting new developments that will be bad for the world. Nicolas suspects that something is amiss, the precise nature of which different reviews have variously discreet in (not) spelling out. For my purposes, it’s enough to note that Evolution is a kind of clean sweep of body-horror tropes and imagery: pregnancy as a deformation of women’s bodies and a young boy’s discomfort with his own changing body are both introduced in imagery specific about their thematics but opaque about the film’s constructed universe.

The film opens this week from IFC Midnight (the release was delayed when the original distributor, Alchemy Entertainment, ran into financial trouble, eventually filing for bankruptcy protection).

Filmmaker: One of the things that’s changed since Innocence has been the widespread shift to digital shooting. How did you adjust to that?

Hadžihalilović: I really wanted to make it on film, to shoot it on 16mm. The DP wanted the same thing, because we both thought it was very interesting to have a lot of texture, especially with this imaginary world, that would make it a bit more real. We were also a bit afraid of the light in the Canary Islands, because we thought that the light scenes would be quite difficult to deal with in digital, more than in film, but we were lucky to not have too much light. [DP] Manuel [Dacosse] tried to find ways to have more texture in the image.My background is much more film than digital. I tried to make digital look like film, which I know is not the right thing to do. The thing I’m not comfortable with with digital is the fact that there’s so much information that the image is so precise, so defined. I like visions and texture, because for me, it gives a kind of mystery and, at the same time, some kind of reality also.

Filmmaker: One of the striking things about your films is the audio track, which is very quiet. How do you go about creating this kind of heightened ambience that’s not quite silence?

Hadžihalilović: I wanted the soundtrack to reflect the mood of a child and not reality. For instance, when we were changing locations from one scene to another, from the hospital to the house, I didn’t want to change the background sounds. I wanted to reflect the emotion more than the location. I couldn’t use the real recordings. It’s always difficult to deal with these kinds of sounds, which are very blank. So the sound editor had to recreate the waves, the sea. Also, because the film was so minimalist, we immediately saw that we had to be very delicate. We were working under some kind of minimalism, because I thought it was scarier to have a kind of silence, not to fill the image with realistic sounds. It was the opposite, to take out. The whole process of sound editing was about taking elements out.

Filmmaker: How much time did you have for the process?

Hadžihalilović: We had quite a lot of time. We had three months of sound editing, but it was a bit special because I had to work with a Spanish sound editor, because it was a co-production, and I didn’t know her before and she didn’t know me. So we had to find a way to adapt to each other, and she was a bit surprised at the beginning about some choices, about not having too many elements or being too realistic. She was doing everything by herself, including the foleys. That was why it took quite a long time. It was quite a luxury to work in that way, because it gave us time to think. The very difficult element we had to deal with is the music, because I didn’t want to have music at first. Then, during the editing, because we didn’t have the sound editing done, the editor wanted to have music, so we tried a few tracks and it worked. So I had to found musicians who could do that, and that was a difficult process. Also, I wanted the film to be very oppressive. I didn’t want the music to give too much oxygen. I wanted it all to be a little bit more of a sad lullabye.

Filmmaker: Where did you find the hospital?

Hadžihalilović: Close to Barcelona. There’s a lot of hospitals in Spanish horror movies.

Filmmaker: Did you have to build any sets or alter the space, or was it pretty much ready as is?

Hadžihalilović: It was a relief when I saw this space, because it was close to what I had imagined, this kind of old-fashioned hospital where we could just clean it up a bit. I don’t like shooting in studios. Of course, it would also have been more expensive, but I think it’s more interesting to have the real place. You have more ideas and I think, again, that it’s important that things are real, that the walls and space are real. So we were looking for some kind of hospital that was not abandoned, because it would have been too much work to clean it. We just had to select a few rooms, and we were also able to paint the walls green. It was mainly about putting in the right furniture.

Filmmaker: How many shooting days did you have?

Hadžihalilović: 26 days. It was limited because we spent time on the water. The sea there at the Canary Islands was very strong. So when we were on the seaside, it was very often quite difficult, because the waves were quite strong and we had to wait. So it was not so much time to shoot. We were very quick, because we had no additional light, and it was more about the children and dealing with the sea.

Filmmaker: One of the most unnerving things about your movies is that because they’re so quiet and using the visual language of horror, I keep tensing up, because I’m trained to expect some kind of big, loud sudden scare after all that build-up. Have you considered doing that?

Hadžihalilović: But then it should be at the very end of the film. Yeah, why not? Next time I could do that. I don’t know if I like it, but it’s quite obvious for me – I think the films are a lot about anxiety or fear that are a bit under the surface. Because it never really happens, the surprise or catharsis with a very loud sound or very graphic image, there is no such thing. For me, it’s like a fear, and the threat is always going on. In a nightmare, it’s very much about not having a catharsis. Sometimes you can have moments where you are more relaxed or where the anxiety goes away. It’s all about that feeling inside you that never explodes.