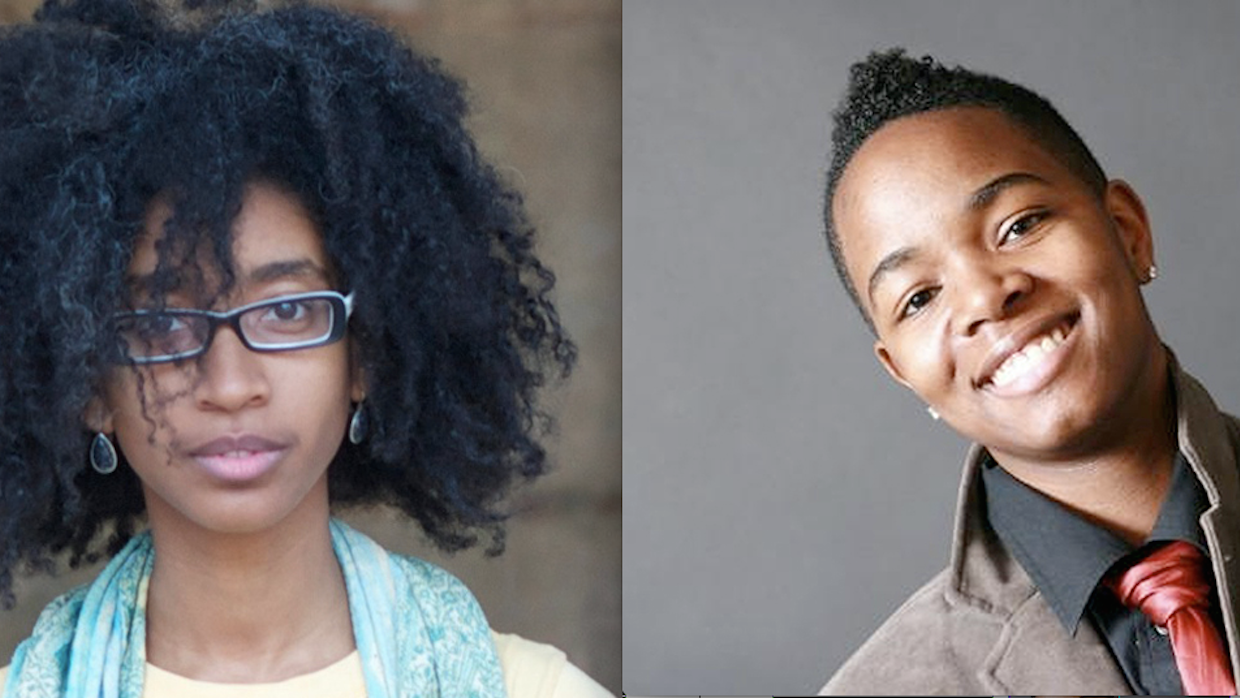 “Let us use our cameras to build our communities, strong, healthy and with joy.”

This seemingly low-key imperative serves as a radical foundation for the Black Feminist Film School, an evolving assemblage of tools, traditions and teaching that supports the telling of stories about the Black experience founded and led by scholar/practitioners Alexis Pauline Gumbs and Julia Roxanne Wallace.

Both Gumbs and Wallace can boast a long list of academic credentials. Gumbs holds a doctorate degree in English, African and African-American studies and women and gender studies from Duke University, and she was the first scholar to research the Audre Lorde Papers at Spelman College, the June Jordan Papers at Harvard University and the Lucille Clifton Papers at Emory University during her dissertation research. Wallace holds an undergraduate degree in computer science and builds on her family’s history of preaching with a master’s of divinity degree in theology from Emory University. In addition to — or in spite of! — these academic achievements, they are also energetic practitioners with a dizzying array of art practices, projects and publications. Taken together, their work is dedicated to nothing less than reimagining the foundations of thinking, living, making and being in a framework that deeply honors the experience of queer people and people of color, engages with spirituality in a profound way, and places accountability — to one’s self, one’s community, one’s past and one’s future — at the core of everything.

The school was founded in 2012 after Wallace was dismayed to find little or no representation of queer people or people of color and few feminists in the graduate film production program at the university where she was studying film history and theory. “I was working on my film prospectus with my committee,” she explains, “and they had very little more than tokenized contributions for me.” Wallace did her own research and offered to develop supplemental materials to share with other students in the department, but was told there were no resources to support such a project. That learning and those resources became the genesis for the new school.

For those outside Durham, North Carolina, where the pair is currently based, the easiest way to access the Black Feminist Film School is through its website, which outlines an approach to filmmaking inspired by the work of the pair’s historical predecessors, including the Combahee River Collective, a group of Black feminists who gathered in the mid-’70s in Boston to organize and engage in political work. This effort included the publication of a statement in 1977 arguing that “if Black women were free, it would mean that everyone else would have to be free since our freedom would necessitate the destruction of all the systems of oppression.”

Perhaps the most significant aspect of the Black Feminist Film School project derives from the way Gumbs and Wallace have adapted the work of scholar Judylyn S. Ryan and her book Spirituality as Ideology in Black Women’s Film and Literature. Published in 2005, the book powerfully argues for a “paradigm of growth” instead of a polarizing paradigm of resistance. Through a dissection of a long list of novels and films, Ryan shows how time and again the stories crafted by Black women promote an ethics of interconnectedness, often by simply highlighting the contributions of minor characters. Further, she argues that the artists who make this work serve as priestesses within Black communities, becoming both a life force and  a source for healing. Gumbs and Wallace have made Ryan’s emphasis on spirituality foundational to the Black Feminist Film School.

Wallace goes on to explain how she and Gumbs approached the creation of the school. “I think the way we’re thinking about it is as legacy — we haven’t taken the approach of asking, ‘What is a Black feminist film?’ Instead we look at films and ask, ‘What are the elements of a Black feminist film practice?’ One big element is spirituality as a way of knowing. Not spirituality as religion, but spirituality as a source of knowledge, which is not the linear way of knowing from academia.” She continues, noting, “It’s also about a responsibility to one’s self and to one’s community, both with the finished project and the process all along the way. How are we building up and sustaining one another? And how are we learning from the legacy that we’re working in? And then how are we also looking toward the future?”

Gumbs offers another way of framing the school’s orientation toward past, present and future. “Basically, we are accountable to two legacies: First, those who came before us in the Black feminist tradition, as well as the intersectional communities that we connect with.” Part of this accountability, then, requires unearthing a lost history. “How can you be in conversation with a set of films you have never seen?” she asks, citing the films of Camille Billops, Julie Dash, Yvonne Welbon, Euzhan Palcy and others. Core to the Black Feminist Film School, then, are screenings, discussions and attention to the preservation of this work.

The school’s second emphasis is explained by Gumbs in this way: “We’re also accountable to future generations, and a future that goes beyond a history of slavery and oppression. So we’re accountable to a legacy, but at the same time looking toward a future, and at all times engaging in a critique of history that has shaped oppression. And then we’re using film to make visible alternative futures, which is an Afrofuturist approach.”

While all of this might sound heady and theoretical, the pair is adamantly practice-oriented. Gumbs explains: “On the production side, we really wanted to create a community of practice — what does it look like to create a Black feminist film? What is a Black feminist practice? What are the structures that go into making a film?”

Gumbs and Wallace have answered these questions in several ways by hosting workshops that investigate collaborative and community-based processes; they’re committed to finding alternatives to the hierarchies that tend to structure traditional film productions. To model an alternative, the Black Feminist Film School engaged in the production of the short film When We Free, written and directed by Wallace but created in deep collaboration with their community.

“We’ve been using the film and what we learned from that collaboration to shape our workshops,” explains Gumbs. “We have a production workshop coming up next year, starting in January, which is again about accountability, and so it’s grounded in our community here and pays attention to who has access to tools and even to a conversation about what it means to be a filmmaker.”

Gumbs and Wallace also host screenings and frequently travel to other venues and communities to teach and screen work by underrepresented artists. They are also prolific writers — the quotation above comes from a short piece by Wallace in collaboration with Kai Green titled “Tranifest: Queer Futures” and published in GLQ: A Journal of Lesbian and Gay Studies.

Considering the recent election, Gumbs and Wallace do not feel an increased sense of urgency. “We live in this urgency 24 hours a day,” says Wallace. Gumbs adds, “Because we’re accountable to generations and specific groups who are basically harmed the most by every sexist or racist politician and policy, we’re the first to feel it.” She continues, “We are always present to that urgency, to creating an alternative that is robust, that is love-infused and that is critical of all of these fear-based oppressions. We live it, we dream it and we read about it from the past.”

While the Black Feminist Film School is central to the pair’s work, they’re also energetically engaged in a host of other initiatives, including Queer Renaissance, dedicated to creating both a virtual and physical community for people of color and queer people, and BrokenBeautiful Press, yet another resource for inspiring community, creativity and growth.

The Mobile Homecoming project is another initiative, in this case dedicated to creating an archive built from conversations and encounters with diverse intergenerational communities of queer and LGBT people gleaned by Gumbs and Wallace as they traverse the country in an old Winnebago. “One of the things that we heard people talking about as we did these intergenerational interviews of queer LGBT folks was the idea of home,” explains Wallace. “Because of the multiple forms of oppression experienced by these people, home is one of the things that has been the most unstable. People really want to have safe space, sustainable space, but also space that is not in isolation, space where people can be in community together, especially as we age and go through the transitions that we make in our lives.” The goal of the Mobile Homecoming project, then, is to connect across generations, across life and death and across displacement and dispersed geographies, and to create connections, as well as new forms of living in community.

Those interested can sign up now for online and on-site classes that will start in January, including courses in writing, acting, production and sound, as well as for the 2017 summer intensive titled “The Poetics of Black Feminist Film,” June 30 – July 3; it will take place in Durham, North Carolina.