Dispatches from the Frontlines of a Studio Picture, Part 2 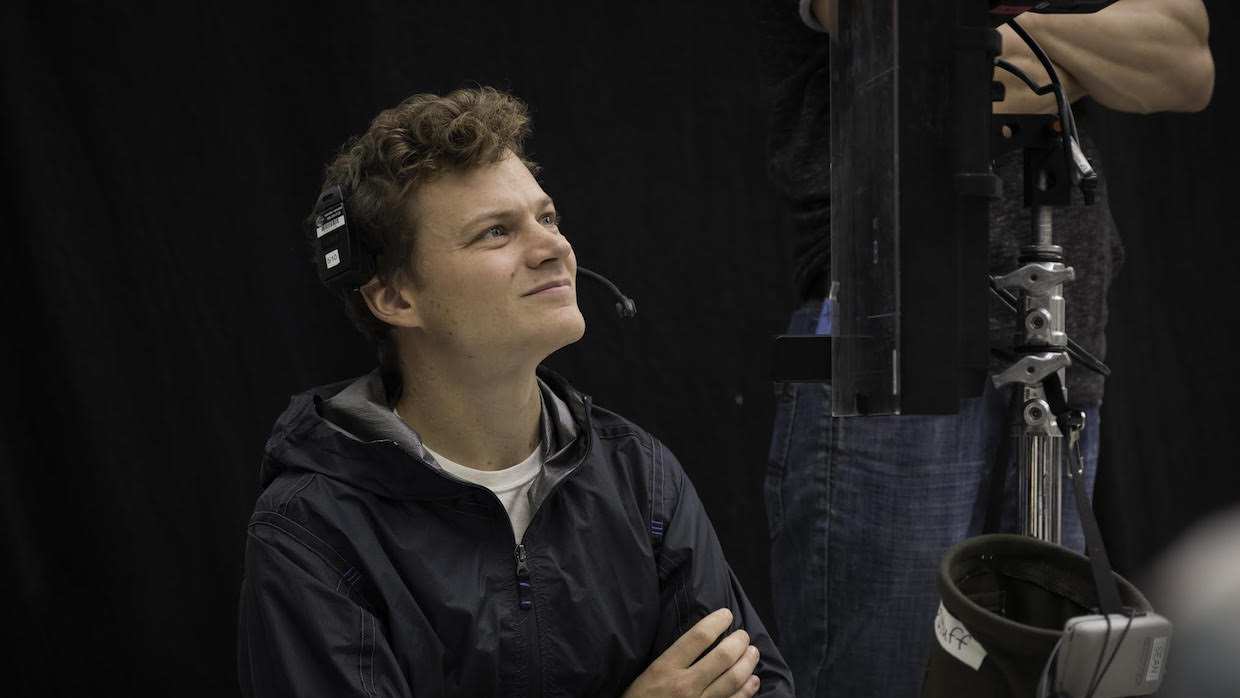 They don’t let you touch anything on a studio film, you just talk to your headset. A far cry from my last NYC feature where I gaffed, pulled focus and operated myself. Although I do get to change the battery on the director’s monitor. (Photo by Macall Polay)

This is my second and final installment detailing a few of the experiences I’ve had and lessons I’ve learned while working on my first studio picture. We wrapped principal photography back in October, so I’ve had a couple months to digest the massive meal that was. Luckily, everyone seems happy with our efforts — which is a big deal, because it’s not just about you and the director feeling good about yourselves at the end of each day. On a studio film as a DP, I have been employed by a pretty major corporation to perform a job in an effort to produce a marketable product. The studio intends to profit on their investment in the film — and I’m right in the middle of that. So while I always strive to make something I’m proud of, something I feel has pushed some creative boundaries and challenged my views of filmmaking, on this film I realized something: It’s not always about me!

Resist the glamour of unlighting.

Let’s face it: Those DPs making jaw-dropping images without any lights? Super sexy. It’s sort of like the carpenter who only uses a chisel and an old hand-auger to produce a fully mortised-and-tenoned, timber-framed house, equal parts inspiring, intimidating and annoying. Using only your mastery of the sun, your location, the schedule and blocking to produce the right image — across an entire film — is really, really hot. Okay, there may be a certain glam to having condors and 18Ks all over the place, but personally I find the masters of less to be more exciting. I’m not wholly there, but I would say I definitely come from the minimalist school of cinematography. Most of the time using a natural environment in a clever way elevates my work more than throwing a bunch of lights at it. And, of course, impressing the line producer with your lighting order has its perks. But in the case of shooting a studio film with five leading ladies and a compressed schedule, now wasn’t the time to indulge in my hand-carved ideas.

Case in point: We were having a terrible time finding a location to serve as our grassroots campaign office and, at a certain point, production had to pull the trigger on a space that was fraught with challenges. It was two stories up, surrounded by tall buildings and had a light-sucking brick ceiling. I wanted another stop of ambience. “You really need five 18Ks?” The UPM had lately been nonplussed with my lighting order. “We can probably pull it off with four,” I conceded. After scouting, I knew there was a world where I could actually take advantage of the consistent ambience provided by the concrete jungle outside, use some small fixtures inside to help my ratio, push the exposure a bit and get to a pretty good place. And while it would have felt good to tell the UPM that I just needed a couple SkyPanels to make the day, I caught myself and kept my order. The next day we shot in the office, ran into unforeseen delays and found ourselves staying at the location much longer than planned. The waning September light disappeared behind the New York City skyline and we still had plenty of work to do. Luckily, with a bit of last-minute shuffling of our shot list, the AD, my team and I were able to salvage the day and light a smaller section of the office fully night-for-day, using every last bit those 18Ks we’re willing to give. Had I succumbed to my desire to work lightly, let alone the constant financial pressures I was getting from the production office, we wouldn’t have made the day. It’s not about my ambitions or even my relationship with the UPM; it’s about protecting the product you’ve been hired to make. Sometimes you need some power tools.

Make your own escape hatches.

When scouting a location with a director, there’s sort of an unspoken presumption: “Assuming nothing goes wrong, this is what we’d like to do here.” You have to think that way; otherwise, you’ll get bogged down and derailed with “what-ifs.” Of course, things don’t always go as planned and then you have to improvise. Well, fair enough — that’s just part of the job. But part of protecting a film is giving yourself multiple outs, and you can light for opportunities you weren’t planning on needing or using. A good, albeit simple, example was a night scene we shot in a convenience store parking lot. The scene took place over a good-sized area, and the store itself played mostly as a visual backdrop. My gaffer and I designed a plot involving a couple lifts with larger fixtures to give us some room to work and just a few augmentations to the location. On a whim I asked him to install a full 60-foot run of Quasar tubes under the awning of the store to lift the facade, just so I’d have some bright features in the background of our otherwise dimly-lit scene. Could I have lived without it? Sure. Was it the cheap way to go? Not really. But I thought it was going to elevate the scene, so we went for it.

A week later we were at our first location of the day and due to move to the parking lot as night fell. It started raining and we didn’t have a cover set. Putting the ladies out in the rain for several pages of dialogue wasn’t going to work, so the director, writer, producer, AD and I quickly set to work figuring out an alternative way to stage the scene. It didn’t help that as we got to the parking lot, my key grip informed me that one of the lifts that had been delivered had malfunctioned and was inoperable. Naturally in the way of one of our planned shots, of course! Our prospects looked grim: We thought about putting the scene inside the store, which was cramped and not well lit, or in a car, which wouldn’t have been very dynamic and didn’t work well for the story. We were running out of time when it was pitched to stage the scene in front of the store. We had all sort of written it off earlier, but once we got there we fussed with the blocking and it seemed to work well. And we just happened to be standing under my 60 feet of Quasars. The scene was lit. We threw a black tarp over the broken lift, I set some deep background lights and we were on our way. What started off as an arguably indulgent flourish ended up saving our butts.

Grab on and then let go.

One of the hardest parts of making a big movie can be the inevitable detachment from the tangible parts of making a movie. While doing Eliza Hittman’s It Felt Like Love, I got to (well, had to) touch everything: the camera, the lights, the stands, the focus wheel, the record button. I was just as physically immersed in her production as I was mentally and emotionally. There’s a wholeness there that feels good — body, mind and spirit. Now I don’t need to be tearing every last piece of gaff tape or laying every stick of track, so operating has been my outlet for physical connection to a project. It becomes more complicated on a larger show, because even if I jumped through the hoops to operate myself, on a multicam show, as this one was, I actually find it a disservice to the film; I need to be at the monitors with the director, see everything that is happening and be able to disseminate notes quickly and effectively in between takes. Asking the director, “How was the other camera?” after every take isn’t reasonable. Needless to say, my physical connection on this film was a bit of a downer. In most of the set pics you could find me sitting with my HME, staring at the monitor, with only my words and gestures to influence the image-making.

One day we were shooting an interior in Brooklyn and the director and I liked the idea of getting an establishing shot of the house at dusk. It wasn’t on the shotlist nor the call sheet, and it was already a very full day. After looking over the schedule with the AD, the prospects to get it didn’t look so good. But to be prepared, I had my second camera operator and the B-dolly grip lay some track out in front of the house just before a walk-away lunch was called. While everyone was away, I was watching the light fade and suddenly thought to myself, “I’m the DP, I should be able to get this shot.” So I went over to the camera cart, grabbed the camera and walked it over to the dolly. The PAs fire-watching suddenly started watching me with growing looks of intrigue and concern. I changed the lens, pulled away the focus motor and turned the sucker on. I was going to steal this shot. As some other PAs came back from lunch early, it quickly became an exciting, bona-fide indie-moment. No one dared touch the dolly, so I pushed myself along as my now-accomplice AD placed PAs in the background. We got the shot right as the rest of the crew started to arrive. Of course they were not well pleased. They couldn’t be terribly mad at me, but they did let the AD have it. I was bummed at the response. A little later I came outside and had a chat with one of my operators, who had scolded production for the faux pas. His beef wasn’t with the fact that I stole the shot, but rather that had the AD and I done a better job at planning the day, staggering crew lunches, etc., we could have had our cake and eat it, too. It was a completely valid point. And once again it wasn’t about me, or my indie-need to grab onto something and “make a shot happen,” but rather a reminder that most of the time the system works, with the right application of the tools at hand. And that’s my job on a studio film: to apply the tools at my disposal to get the best product working with and for the company, rather than against it. It’s only a ball-and-chain if you see it that way.

“We can complain because rose bushes have thorns, or rejoice because thorn bushes have roses.” — Abraham Lincoln