“We’re All to Blame if We Don’t Do Anything”: Director Michelle Latimer | RISE 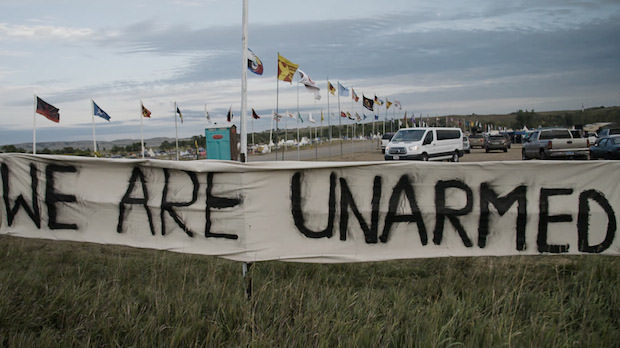 While I was at Standing Rock I had the privilege to stay in the Oceti Sakowin camp and be part of a community aligned to stop the Dakota Access pipeline. And through it all there seemed to be an overarching narrative that the media hooked into. It usurped everything else. Wherever you turned you would hear about the violence and the chaos of state-led oppression against “protestors.” And, yes, there was most definitely oppression. It was a different kind of existence at the camp. We were surveillenced by planes and helicopters 24 hours a day, many of us were stopped and questioned by police at highway checkpoints, and all were aware that at any moment camps could be raided and people could be arrested or imprisoned. And this was for acts of PEACEFUL RESISTANCE. No one was armed. We were there to stop a corporation from profiting off our land and threatening water – a resource and lifeblood that sustains all life.

But what was often missed by the media was a quieter story and something that has stayed with me since I left camp. What unified people at Oceti Sakowin camp was faith. A belief that, in coming together, we could defeat the wealthiest and most powerful entities in the world. Here there was a sense of community and a renewed hope and understanding of the power people can have. The camp functioned like a village and there was no money exchanged, no police, no one leader – but rather, a collective way of governance, a communal sharing of resources and a sense of accountability to one another. People relied on each other for safety and survival. That is empowering and beautiful and it works! But society doesn’t want us to believe it works – because if we believe too much, then who will buy all thing things we need to run our economy, who will follow the will of the ruling class? So it’s easier to just accept the lies that are fed to us. Buy more, protect yourself more, individualize to get ahead, trust the state to tell you what’s good for you even as you watch your people die by its hand.

And we’re all to blame if we don’t do anything. But Standing Rock taught me that there is a great change coming. People are rising up to say enough is enough. As Nick Estes who is featured in RISE says, “They might be able to take our land, but they can never take this experience from us.” In telling our stories we prepare ourselves for the greatest battle yet: Mni Wiconi = Water is Life.