“An Act of Resistance against the Flux of Capital”: Editor Yael Bitton on Machines 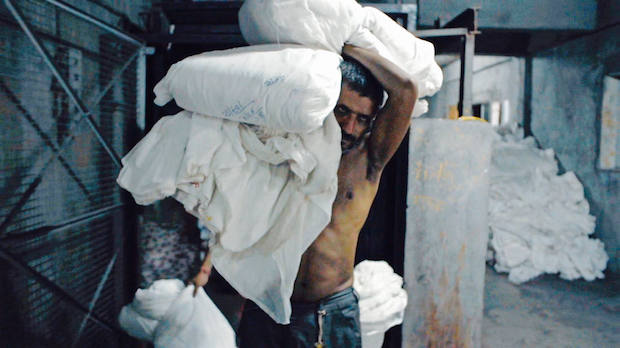 by Filmmaker Staff
in Editors, Interviews, Sundance
on Jan 22, 2017

First-time director Rahul Jain made a strong impression in 2016 with Machines, his documentary portrait of a massive sweatshop in Sachin, India. The film premiered at the International Documentary Film Festival Amsterdam (IDFA) and made its U.S. debut this week at Sundance. Praised for its visceral, experiential depiction of manual labor, the film provides a rare glimpse into the textile mills where many of our products originate. Jain hired the Paris-based Yael Bitton as one of multiple editors to give shape to his harrowing footage. Bitton spoke with Filmmaker before the film’s five Sundance screenings about Machines‘ unconventional narrative structure and deep political implications.

Bitton: I was contacted by Ikka Vekalhati, with whom I work at Rough Cut Service, to know if I would be keen to work on editing and consolidating the structure of a potentially incredible and unique film which he had seen in India at some workshop. Rahul Jain had put together a very strong cut of his Machines already but it needed some deepening both structurally and content wise.

I have been working as a film editor in the documentary world for over 15 years, both in the US and in Europe, as well as directing my own work, and after having been a script supervisor on a number of North American indie features in the mid-’90. My interest in cinema, language and philosophy, and film language, as well as literature and dance, began very early on in my life. And I think this common love for cinema, and what cinema can achieve, created a strong connection between Rahul Jain and myself.

Bitton: What struck me in his “not yet a film” cut was the depth of his gaze and his ability to master form for content and not have the content dictate the form. Form is content. And as much as I love most films I cut, it is quite rare to meet a first time director who has this understanding, that cinema is a language of its own, and who can articulate the mental vision he has in his head into the shape of a film. The adequacy between the mental idea and its realization is hard to achieve as we know. Hence, I decided to go along with the proposal and Rahul came to join me in Paris where I live. I most definitely wanted to respect his integrity, the deep and long process about bringing this film into the world. I knew how much he had struggled to get to this first rough cut I had seen.

At the same time I knew that some invisible dramaturgy needed to operate in the film. So I had to find a way that would preserve Rahul’s unique vision of parallel actions taking place in the space of this huge factory, that would render some sort of murkiness of time, and that we needed to augment the sense of time/body/work to push the viewer’s experience as far as possible. Dealing with the non-narrative of the factory while bringing out some sort of invisible narrativity was probably the most subtle.

Dealing with the interviews and how and where to place them in regard to the “unconventional narrativity” we were trying to achieve was a challenge. Because to lose them altogether would mean to deprive the workers of their own agency while objectifying them. We did not want that. Rahul had a very deep notion about this, to use the interviews in a was manner that did not allow for identification or pity but that would in a way, rather, restore the worker’s dignity. Finding the balance between the interviews and the work was a challenge.

Finally, I had a clear sense of some key turning points and where to place them, such as the song/sleep sequence, the kids, the boss and the final interview of all the workers in a circle. Once these elements where placed the structure became more manageable.

Bitton: Being part of a network of great commissioning dramaturges is such a benefit and a pleasure, and a learning curve  – as the learning in editing never stops –  and so, we do a lot of back and forth, with Ikka, and our colleagues, a lot of feedbacks.

You dig into the material for a while, do a lot of talking and thinking, create something, test it in the eyes of the director, and then in the fresh eyes of this brilliant network of colleagues, and then you deconstruct, and reconstruct.

Until you find the form, it’s like sculpture, and writing, and painting, and composing….you try to get as close to what the director sees as his vision on the screen. It was, and is in general, not always easy, but with persistence, intelligence, and clairvoyance you eventually,get somewhere. I never stop trying, I am my harshest critic and won’t let it go until necessary. The process is the technique.

Bitton: As I said above, I accumulate functions even though I mostly work as an editor and consultant nowadays. I came to editing after leaving the fiction world and the set, and wanting to direct my own documentaries in the late 1990s. And I realized that specific process was so close to how my mind works all the time, that it was the perfect place for me to be in, the edit room. I worked as an assistant/associate editor for a while in NYC, with Melody London and Susan Korda, and then I kept on editing, and editing, and editing…

I believe having watched a lot of cinema of all kinds, and having being taught by really deep filmmakers at film school in Brussels (such as Van der Keuken andRobert Kramer among others) and worked in fiction, experimental films, gave me a palette to use in my editorial work. But reading literature, poetry and essays is at core of my process.

Bitton: AVID; most steady and precise.

Bitton: The interview of the man in front of the white bags. It was difficult and took a long time. Finding the order of actions, textures, shots, colors. You do it by trying and failing and trying again, and failing again, as Beckett would say.

Bitton: In my eyes, the film has a very deep political meaning in the age of the global, neoliberal capital. Most of what we buy and use is produced in similar conditions, more or less. In conditions that use the human body and time to manufacture goods to sell. I knew this from the beginning, from the first time I saw the first cut.

So I think that the notion of building deep time in this film to counter the flux we are all engaged with with our lives, phones, networks, credit cards, was for me fundamental. Each cut needed to be thought of as an act of resistance against the flux of capital. And Rahul’s achievement was to never give up on what he had the intuition to do and to not engage into a “social” or “sociological” film, but to use the tools of cinema: time/space, to convey to us this very harsh reality.