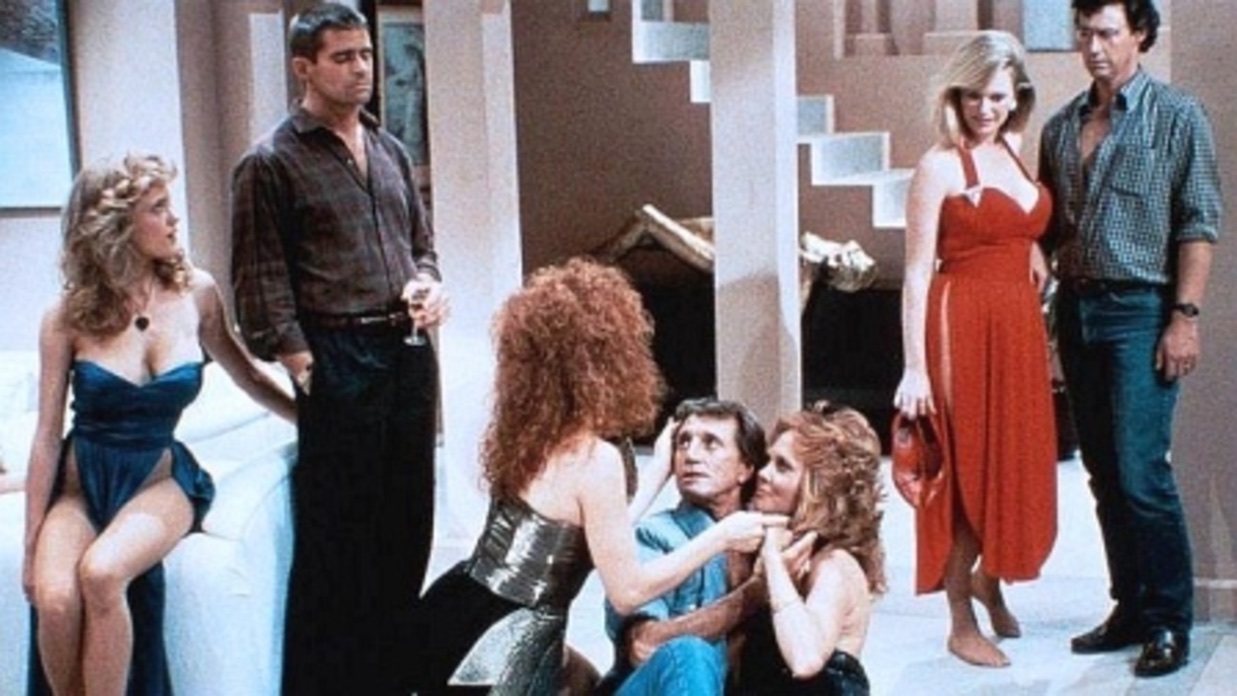 One of my personal holy grails finally arrives on Blu-ray this week in the form of Olive Films’ release of Peter Medak’s bizarre, riveting The Men’s Club. Released in 1986, the film’s print ads promoted it as the successor to popular ensemble films like The Big Chill and The Breakfast Club, which is a little like trying to convince people to watch Abel Ferrara’s The Bad Lieutenant by comparing it to an episode of CHiPs. The Men’s Club follows a night in the life of a group of men (and what a group: David Dukes, Richard Jordan, Harvey Keitel, Frank Langella, Roy Scheider, Craig Wasson, and Treat Williams!) who gather for a night of male bonding that starts with whining about their wives and ends with an excursion to one of the weirdest whorehouses I’ve ever seen in a movie. As one of the prostitutes, Jennifer Jason Leigh gives an incredible — and incredibly odd — performance that stands alongside her work in other idiosyncratic indies of the era like Heart of Midnight, Last Exit to Brooklyn, and Miami Blues; if you want evidence that she’s one of our greatest living actresses, just look at these four movies back to back, and then consider that she’s been doing work at this level pretty much nonstop for over 30 years now. But as the title would indicate, this film really belongs to the men, who Medak frames in a punishing series of optical close-ups that force both the characters and the audience into a confrontational position -– the invitation to identify that characterizes both The Big Chill and The Breakfast Club is totally missing here, as both Leonard Michaels’ script (adapted from his novel) and Medak’s direction prioritize alienation over empathy. One could accuse the movie of being misogynistic if there was any indication that the filmmakers were encouraging identification with these jerks, but one of the film’s most fascinating attributes is its willful refusal to signify how we’re supposed to feel about the behavior. In any case, these characters don’t just dislike women — they dislike themselves and each other, yet put on a superficial pretense of male camaraderie that only adds to the peculiar tone of the piece. The Men’s Club is hilarious, compelling, and off-putting in equal measures; a one of a kind discovery that deserves to be better known.

The same can be said for director Martin Ritt’s final film, the impeccably crafted and gently moving 1990 drama Stanley & Iris. Dismissed upon its release for a number of moronic reasons (mostly having to do with the casting of Robert De Niro and Jane Fonda as working class characters — guess what? It’s called acting, folks!), the movie’s classical pleasures have aged very, very well. De Niro plays a cook at the New England factory where widow Fonda works; when she learns that he’s illiterate, he’s initially embarrassed but eventually asks Fonda to teach him how to read. Ritt and his frequent screenwriters Harriet Frank, Jr. & Irving Ravetch use the social issue at the core of their story as a springboard for something deeper and more profound than a mere message movie — not that there’s anything wrong with message movies, though this was another topic of snarky condescension among critics of the time. The real strength of Stanley & Iris is its subtle depiction of a romance between two weary adults whose love story is a series of minor, delicate steps forward and back rather than a passionate whirlwind. Working in his favored ’Scope aspect ratio, Ritt composes expressive frames in which the spatial relationships between Fonda and De Niro’s characters beautifully convey their constantly changing feelings for each other. Ritt was a famously modest artist who eschewed the idea of a director as auteur, but few filmmakers were ever better at orchestrating every visual and aural tool at their disposal to such perfection; among the many satisfactions of Stanley & Iris is the lovely integration of music and image, with a John Williams score that ranks among that composer’s very best. Twilight Time’s new Blu-ray of the movie contains Williams’ score as an isolated track — one of several reasons I recommend picking this limited edition disc up immediately, before all the copies are gone.

Stanley & Iris is one of two terrific Jane Fonda vehicles released by Twilight Time this month; the other is Alan J. Pakula’s grim but beautiful Western Comes a Horseman (1978). Made after Pakula’s trilogy of masterpieces infused with and responding to a sense of Nixon-era American paranoia (Klute, The Parallax View and All the President’s Men), Comes a Horseman takes place in the 1940s but feels like a movie set in the 1800s — and speaks to both the 1970s and today. The story, which involves Fonda as a small-time cattle rancher who teams up with cowhand James Caan to take on bigger rancher (and ex-lover) Jason Robards — who is himself in danger of destruction at the hands of the banks — is the stuff of dozens, if not hundreds, of oaters, but Pakula and screenwriter Dennis Lynton Clark sidestep clichés in favor of a nuanced look at capitalism in transition. A good Western is about the time in which it takes place and the time in which it was made; a great Western is about the time in which it takes place, the time in which it was made, and whatever time you happen to be revisiting it in later on. Comes a Horseman stands alongside classics of the genre like Stagecoach, The Ox-Bow Incident, and Unforgiven in having its finger so firmly on the pulse of the American character that it yields new insights on every repeat viewing. The movie reunites Pakula with cinematographer Gordon Willis, who proves as adept at Western vistas as he was at the urban landscapes and interiors of The Godfather, Manhattan, and Marathon Man; his elegant simplicity strips the characters down to their essences, emphasizing both the brutality and the beauty of their lives with awe-inspiring visual purity.

That kind of purity is evident in my final recommendation of the week, Derek Cianfrance’s The Light Between Oceans, which is now available as a gorgeous Blu-ray as well as on multiple digital streaming platforms. One of the most inexplicably underrated films of last year, Oceans is an exquisitely empathetic melodrama that starts breaking the viewer’s heart early on and never lets up until the finale. Yet there’s nothing pushy or manipulative about Cianfrance’s approach; his emotional effects are all the more striking because he doesn’t force them on the audience but lets them subtly, slowly work their way into the spectator’s consciousness. Based on M.L. Stedman’s 2012 novel, the movie follows a young couple (Michael Fassbender and Alicia Vikander) living on a remote island who are unable to conceive a child. When a baby washes up in a rowboat, the couple decides — in spite of the husband’s doubts — to raise it on their own, a decision that leads to considerable complications when the baby’s mother (Rachel Weisz) turns up on the mainland. The Light Between Oceans represents Cianfrance’s attempt — wholly successful in my opinion — to merge his usual moral preoccupations with the demands of a wide studio release, and I’m not sure why the movie didn’t find the audience it deserved in theaters. Hopefully home video will lead cinephiles to reconsider it as the next logical step in Cianfrance’s evolution (it makes a great double bill with his Place Beyond the Pines), and mainstream audiences to appreciate its tear-jerking pleasures.