No Way Out: Brent and Craig Renaud on Their SXSW Doc, METH STORM: Arkansas USA 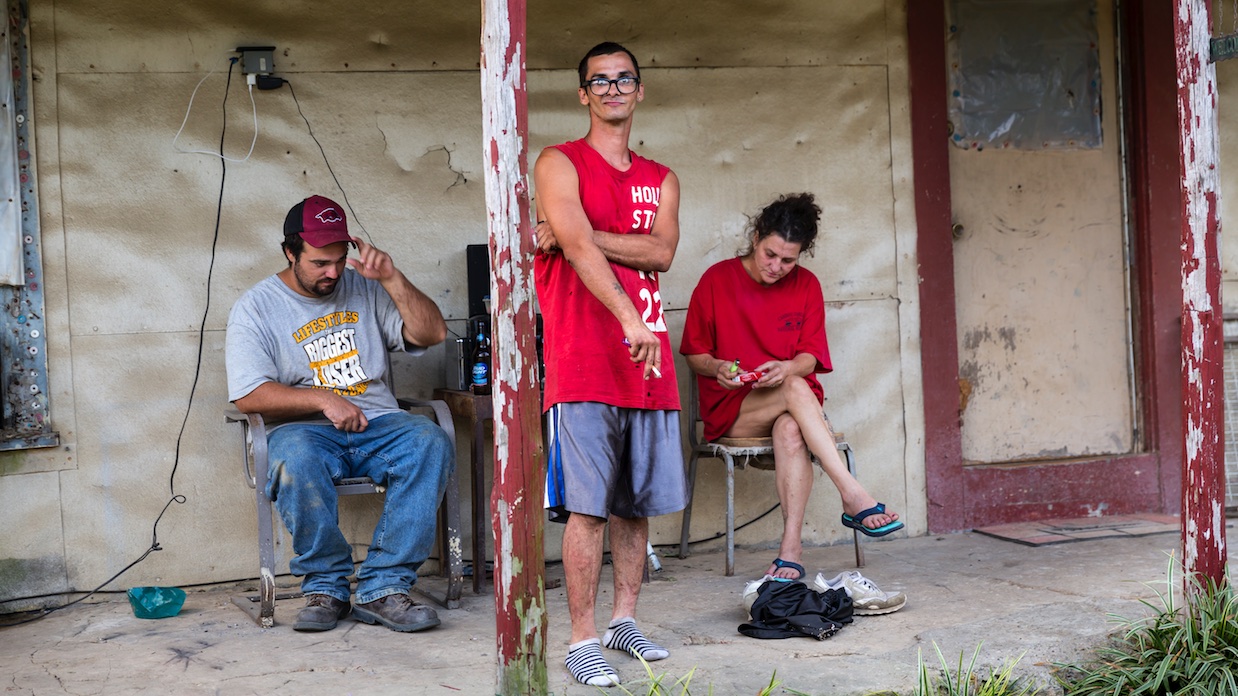 World premiering March 11th at SXSW is METH STORM: Arkansas USA, the latest HBO doc from the Peabody (and Edward R. Murrow and Columbia Dupont and Overseas Press Club) award-winning Renaud brothers. Unsurprisingly, the Arkansan siblings have taken a deeply humanistic approach to the meth epidemic with this film, following a soft-spoken DEA agent struggling to stem the flow of (cheap and extremely potent) Mexican cartel “ice” into his rural community. They parallel this narrative with that of a close-knit family of impoverished addicts, led by a no-
nonsense matriarch who just can’t seem to catch a break.

It’s been a few years since I last interviewed the Renauds, after initially meeting them at their terrific, now defunct, Little Rock Film Festival, which they co-founded (and need to resurrect). And I’ve been anxiously awaiting the final cut of METH STORM: Arkansas USA ever since Craig mentioned that he was relocating permanently back home to Arkansas, far away from the dangerous international conflict zones the pair have painstakingly documented over the past decade. This way he could spend more time safe and sound with his young family. And, uh, trail undercover narcotics agents busting drug dealers with loaded guns.

Filmmaker caught up with the brothers as they were putting the finishing touches on the adrenaline-fueled flick, which premieres March 11 at SXSW.

Filmmaker: Over a decade ago you followed a drug addict couple in another HBO doc, Dope Sick Love. But I’m wondering if there were any challenges particular to this shoot that you hadn’t encountered before in any of your other conflict documentaries?

Brent Renaud: In terms of style and process, the way we work today is very similar to how we did things a decade ago on that first film. Often working alone, we integrate ourselves for an intense amount of time into the lives of people whose stories, when told in-depth, we feel inform the times we live in. Set in a downtown NYC that few people would recognize today, Dope Sick Love depicted in excruciating detail the destruction drug addiction has on young lives and relationships. It was 90 minutes of hell, mimicking the chaos and pace of an addict’s life, but there wasn’t a lot of overt context to the story.

With this new film, we didn’t want to just reset Dope Sick Love from New York City to rural America. METH STORM has a much more developed narrative, weaving the stories of the addicts and drug dealers with those of the police officers and federal agents who pursue them. Over time both sides inevitably challenge perceptions and stereotypes. And in this film, right on the surface are the immense challenges facing rural America today: crushing poverty, lack of access to jobs, lack of access to quality education, nutrition and healthcare, and generational addiction to cheap deadly drugs. METH STORM looks and feels a lot like Dope Sick Love, which we are proud of, but it’s a more complex film.

Filmmaker: I assume there was some bureaucratic red tape to cut through in order to follow these DEA agents in your home state, though I’m guessing it must have been even harder to gain such intimate access to the meth addicts who also let you into their lives. How did you go about doing this, and why do you think Veronica and her family let you film them, even when they were at their most vulnerable?

Craig Renaud: We get this question a lot in our work, and it’s difficult to answer, as the motives of your subjects always differ, and sometimes we don’t understand them completely. It really just gets at the heart of what we do. Whether it’s gang members in Chicago, or drug addicts in rural Arkansas, disabled athletes or politicians, we pursue characters that interest us and who we often feel are misunderstood. Before we start a project we discuss with the subjects our methods and intentions, we share with them some of our past work if they want to see it, and we let them decide whether they want to be a part of the project or not. We are big believers that in documentary film, especially the kind of immersive, narrative nonfiction that we do, your subjects are partners in an often long and intense process. It has to be a good fit or it’s not going to work out well for anyone. 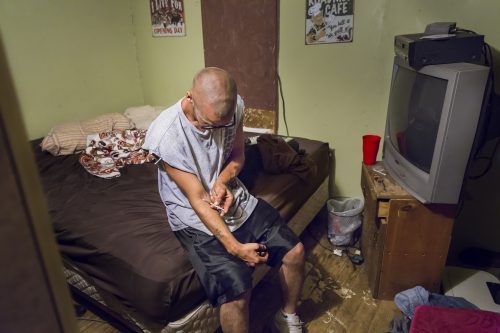 Filmmaker: The main DEA guy you follow is pretty much the complete opposite of the agents Hollywood portrays. He’s an older gent, soft spoken, who acts almost fatherly towards the young people he’s busting. (Even telling one guy that he went to school with his dad!) He genuinely cares about the people in his community. Did you purposely “cast” him as a way to upend the DEA caricature?

Craig: More often than not, we find that when you really get to know people they rarely resemble the images presented in the media and in movies. Over the few years it took to make this film, we found the vast majority of the law enforcement personnel we spent time with to be good, hardworking people, with a really tough job to do. We didn’t have to go looking for Jonny, the cop featured in the film, as he was in a leadership position in the unit we first embedded with. However, we were drawn to him immediately. Jonny grew up in the community he now patrols, a community that has been divested by methamphetamine addiction. He is very open about the fact that members of his own family, like nearly everyone else’s in the area, have been deeply affected by drugs. Most of the people Johnny has to arrest are selling meth to support their habit. He understands the mistakes people make, and a lot of the reasons beyond their control for why they make them. We think Jonny’s character is a real testament to the potential power of community policing, and the real benefits for law enforcement officers to be from the communities they serve.

Filmmaker: Funny, but I don’t remember music being employed as much in your previous films. How did you choose the soundtrack for this latest doc?

Craig: In Dope Sick Love, by design there wasn’t a single note of music, and certainly there hasn’t been in the majority of our journalistic work. Music can on some occasions be a crutch, used for a kind of emotional manipulation that we try to avoid. A lot of the music that you notice in this film is organic to the scenes it appears in — it’s coming from cell phones and car stereos, or one our characters is singing the lyrics themselves. Like the subjects in the film, we are from the South and fans of country music, the blues, and Americana-type stuff. As we got into editing we felt like music was unintentionally communicating to the viewer a lot about the look and feel of the rural south. We liked it so much that we ended up adding a couple of iconic, soundtrack-type songs to take things even further, and to aid in the blending of our dual narratives.

Filmmaker: It’s interesting that — like with the inner cities — the root of the drug problem lies in the lack of jobs, of hope and opportunities, in these communities, something your film smartly shows (rather than tells). Dealing meth is the only way to survive. (Ironically, the main DEA agent even mentions that Arkansas’s own Walmart ran a lot of businesses out of town!) One of the things that most struck me about the current rural meth epidemic while watching your film, though, is how dissimilar it is to the crack epidemic that overwhelmed inner cities in the 1980s (regardless of the fact that both affected the poor). I mean, I don’t remember crack being an intergenerational problem. If anything, kids were turned off to crack after witnessing their parents succumb to death and destruction. Whereas these close-knit communities in the rural south are seeing mothers and fathers shooting up with their kids and grandkids!

Since you’ve filmed in America’s urban environments as well, I’m wondering if you have your own theories about the differences between these two epidemics.

Brent: As a matter of fact, as we have been making this film in rural Arkansas we have been working on another film set on the streets of Chicago. In urban areas crack may be losing some of its popularity among young people, as you say, but drug abuse in urban America is as big a problem as ever, with a bunch of new, dangerous synthetic drugs doing crazy things to very young kids. These two communities have a lot more in common than you might think. Both have virtually no access to good stable jobs or good schools, very little access to healthy food and good transportation, accessible healthcare, etc. Throw on top of that dwindling support for mental illness treatment and easy access to illegal mind-numbing drugs.

In communities like these it’s not surprising maybe, that only superstars make it out. In one scene in METH STORM the sheriff is looking through the numerous arrest mugshots of our main character’s kids, and says, “These boys growing up the way they did, I don’t think they had any choice but to be a part of the drug life.” The truth is that an unacceptable number of people growing up poor in areas both rural and urban have little or no access to what we think of as the American Dream. This is still a very difficult reality for Americans to accept, and goes against one of our greatest ideals, but it’s the reality nonetheless.