Richard Linklater on the Future of the Austin Film Society: “This is the Best Year We’ve Ever Had” 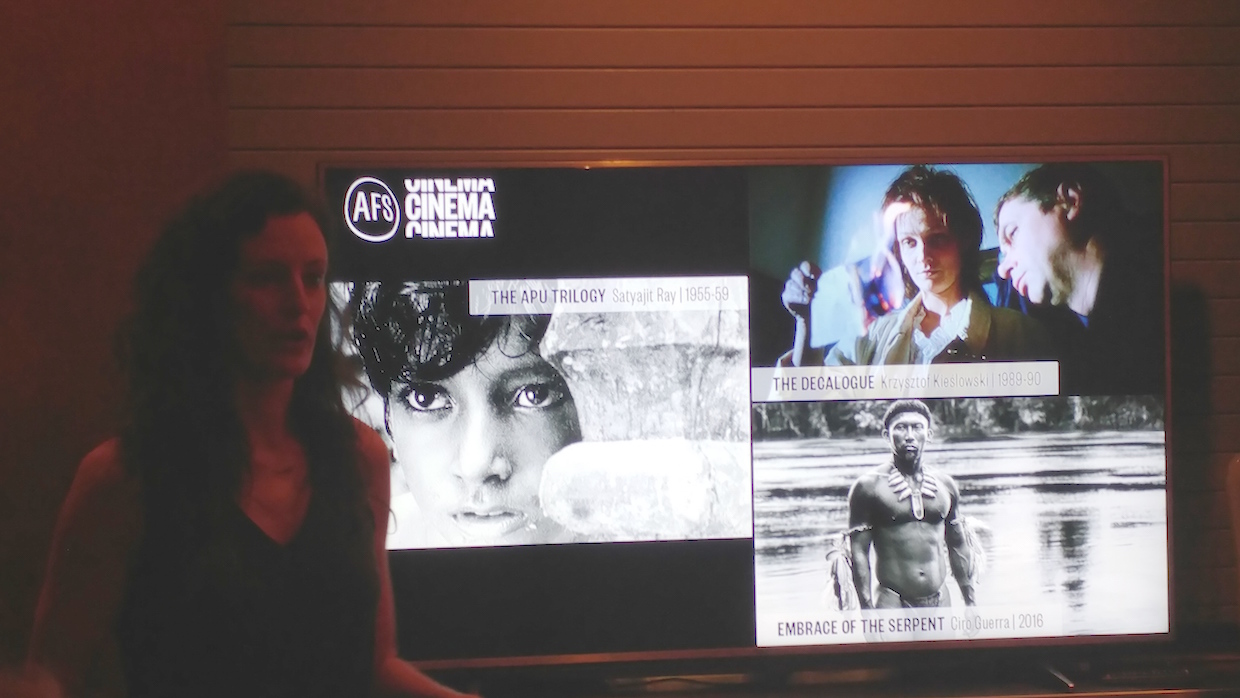 The Austin Film Society hosted a media-exclusive lunch this past Friday to discuss their most exciting current project: the redesign and expansion of their cinema and event space. Presented by Founder & Artistic Director Richard Linklater, CEO Rebecca Campbell, Head of Film & Creative Media Holly Herrick, architect Michael Hsu and Designtrait, the afternoon stressed a shared belief in making a place for Austinites to discover artistically significant cinema old and new. A repertory house, a first-run theater, a shrine to great records and beautiful poster art, and an event space equipped to host a multitude of special gatherings: it’s clear that the AFS wants to further what they started. Beginning this summer, they will have that opportunity.

“32 years ago, the Film Society started with one goal, to see a bunch of great movies from around the world,” Linklater reminisced to guests. “I’d been in Austin a couple of years at that time and noticed that the repertory screenings on campus and around town were the same films over and over again. The Austin Film Society came out of this frustration [of realizing] that there’s so much to the world of cinema.”

Even back in the ’80s, Linklater knew that building a sense of community was important to a cinematheque’s sustainability. “You could rent a film and sucker some people into helping you pay for it…like an audience,” Linklater said, “and that’s where we started. From the very beginning, the first show we ever did was a big success. Some things are just meant to be. At that very moment, film societies were dying around the country. And yet in Austin, there was this void that we were filling. We were so successful right off the bat, and we had discovered this audience.”

Although the AFS wants to be known going forward as as a premier filmgoing venue seven nights a week, they’ve learned that the financially-sound business side of things doesn’t always come easy. “It was always our dream to have our own venue,” Linklater admitted with some knowing caution, “and in the late ’80s and early ’90s, we had a space right across from our campus. We had two 16mm projectors and maybe 99 folding chair seats. We had our own little cinematheque, but it was way too early. We were getting a little grant money at the time and I kind of splurged. It was wonderful, but it was kind of like being in business, a retail business. We were a cultural organization, and we went for a while until the landlord thought he should start getting paid rent for the first time! We asked if he could do $100 a month, and he said no, and that was the end of that.”

Tthe local Austin community shares in the AFS’ enthusiasm, as made clear by the $175,000 raised from their Indiegogo campaign. “We’re a cultural and educational organization,” Linklater made clear, “but to actually have these two screens and the leeway and creativity that gives us…it’s a place for the community. We’ve been showing movies at our current location for a while. The standard theater exchange between the audience and the theater is like ‘we get you in, we process you, and we get you out.’ But for our community, it’s really important just to hang out and have a place to talk. I think everyone knows how special that is. This is like our church, our community, and that lobby [will allow you to] see like-minded people and friends there that you can talk about the movie with and hang out. That’s Austin. Today we’re at that place that we were at 30 years ago. These art cinemas have gone away, but we’re confident in our community that this is going to be a big success. We know it is because we have an audience. It’s been expressed in our crowdfunding campaign that’s helped pay for a lot of this. We’re just really excited that this is our time.”

“I say this all the time to the great people who are working at the Film Society, but I mean it: this is the best year we’ve ever had.” Linklater continued. “Usually you only realize the peak times when they’re over, i.e. ‘oh, that was a golden age at the time but I didn’t recognize it at the time.’ I’m recognizing it at the time. We’ve got a wonderful organization, we have the best people, and it’s been a thrill. We’re appreciating that and just trying to serve film-lovers and our film culture locally. It’s something Austin can do. We feel there’s a need there and we’re there for that. We’re looking forward to showing a lot of movies, to give that film that wouldn’t have a theatrical run anywhere else in town — we want that film to show for a week or more and to hold it over if it’s doing well. We want the film to build an audience here. When you show it only one night, a lot of people can’t go that night. When you show it for a week, it gets reviewed and becomes a thing. We look forward to offering that opportunity to a lot of films and to be a collaborator with other film organizations. We want to make a film-happening space. It’s going to be fun.”