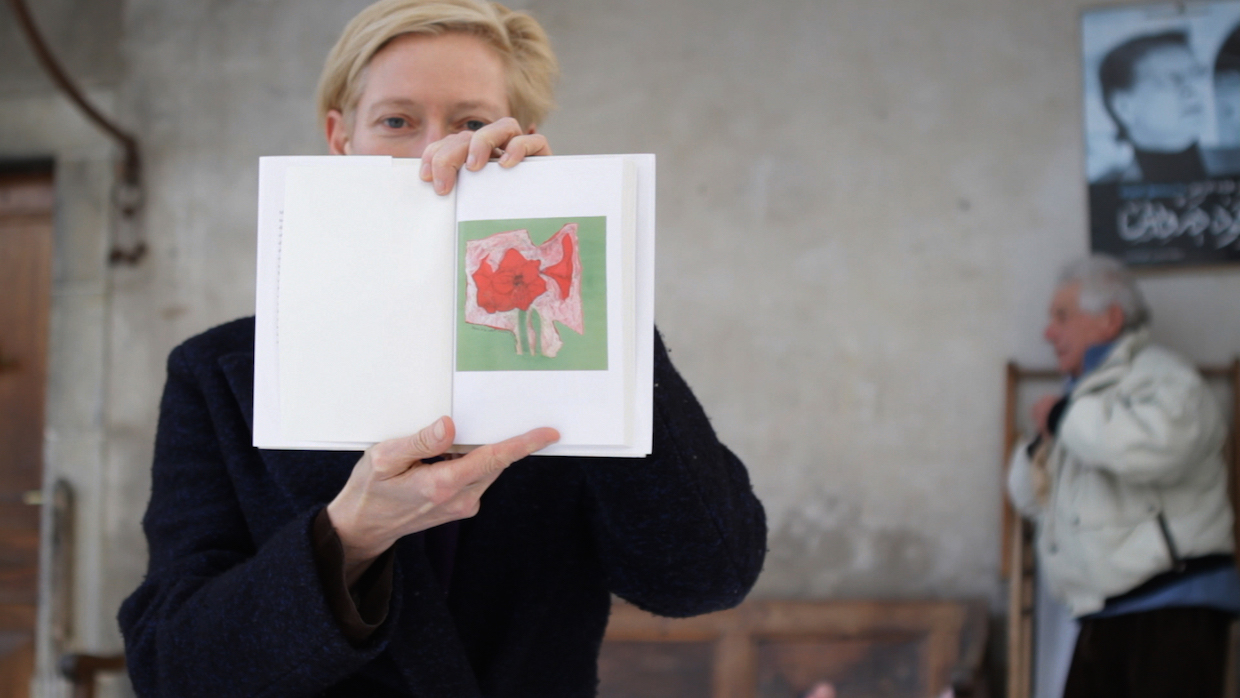 For many years I have kept in my nightstand drawer a rectangular electronic address book from the early 1990s. About the size of a flattened wallet, the device is matte black, slim and opens up to reveal a narrow screen and tiny keyboard on which I could type in and retrieve phone numbers and addresses. Or I could when the battery worked. I have saved this little booklet for so many years not because it reminds me of my petty pleasure-flaunting vanguard technology but for another reason: It contains Derek Jarman’s phone number. Then, the sequence of digits signaled a magical if ethereal thread to one of our era’s greatest artists, and the thought that I had access to a line that traveled across the ocean — through a garden infused with red and orange poppies, and straight into his cottage in Dungeness, possibly right to his desk where he sat outlining scenes for a new movie or drafting gardening plans in his sketchbook — made me ineffably happy. And so I keep the little black book, now cool and darkened, in my drawer.

Perhaps a similar desire to sustain a link to Jarman, who died in 1994, drove the founders of the Derek Jarman Lab, a fascinating filmmaking initiative currently housed at Birkbeck, University of London. The initiative began when a group of students who were enrolled in a graduate program at the London Consortium, a cultural studies and humanities program that no longer exists, bought several video cameras in order to investigate an academic practice integrating filmmaking and humanities research. Their professor was Colin MacCabe, who is not only a renowned film scholar but also a great producer as well. As a scholar, MacCabe is known especially for his involvement with Screen, the groundbreaking journal of film theory, as well as for his books on Jean-Luc Godard; as a producer, he supported the work of many filmmakers, including Isaac Julien and Jarman, and with his own production company Minerva Films he produced a portrait of Jarman titled Derek, which was directed by Julien and released in 2008.

One of the projects that emerged from the collaboration of the London Consortium students, which included Bartek Dziadosz, Lily Ford and Sarah Joshi, was a portrait of John Berger. According to Ford, who is a historian with a doctorate dissertation dedicated to the culture of flight in Britain in the 1920s as well as the Lab’s deputy director, the idea to go and film the recently deceased critic, author and screenwrite came about right after the premiere of Derek. “After their portrait of Derek was finished, Tilda [Swinton] told Colin they should try to do a film profile of John, too. They had both worked with him on the 1989 film Play Me Something. John Berger was another figure, in terms of ideas as well as his personal life, who was very influential for Tilda and she thought more people needed to know about him. So what we ended up making is nothing like Derek, but it has a similar affectionate respect and a desire to further spread ideas.”

Titled The Seasons in Quincy: Four Portraits of John Berger, the film premiered at the Berlin International Film Festival in February 2016 and is exemplary of a kind of practice the Jarman Lab advocates, namely “research-led filmmaking,” which insists on the productive potential of a form of thinking that takes place through the making of moving images. Rather than using cameras simply to illustrate preconceived ideas, the Lab’s founders instead allow thinking to emerge through making, which recalls Jarman, who often used his camera as a tool for sketching. “When we were choosing a new name for the lab, it seemed apposite to draw on Derek Jarman,” explains Ford, “partly because Colin felt that the ethos of Jarman, where you just point and shoot, where you just start filming wherever you are and you work with what you’ve got, could also be part of our own ethos.”

The Lab serves two distinct groups of students. The first consists of humanities scholars interested in using cameras and filmmaking in their own work. Rather than enroll people in a months-long class, the Lab instead teaches a four-day course. Bartek Dziadosz, whose background includes the study of law and film studies as well as contemporary media practice and who serves as the Lab’s director, explains, “The format is based on the premise that in four days you can learn the basics of filmmaking, and I mean all aspects of filmmaking.” He continues, “In those four days we teach people who may have never had a camera in their hands how to switch on the camera and how to translate ideas into scripts, into narratives or filmic arguments. We move on to editing, and we finish with a short piece.”

Dziadosz explains that this process allows people to begin to intimately understand the language of film, which will help them whether they choose to continue making their own work, or to collaborate with others. “Ultimately what we’re interested in is creating a vibrant and creative environment for people who know how to use cameras and those who have expertise in their research area, which is very productive and allows for collaborations that produce films that are quite unique and very different from conventional films.”

The second audience for the Derek Jarman Lab consists of undergraduates who enroll in a course through the University of Pittsburgh and spend a semester in London. Rather than teaching a traditional film production course, however, Ford and Dziadosz explain that they prefer to integrate cultural studies, philosophy and filmmaking. “It’s not quite film studies,” explains Ford, “but a very broad approach that contextualizes film within 20th-century history focusing on the 1920s and city films, thinking about how films were being used at that point to make sense both of modernity and of the city as a peculiarly modern form.” She continues, “The students mine their time in London for inspiration to make an essay film, and we give them a toolset that’s very practical, but we also give them a theoretical framework with a range of topics, like psychogeography, Situationism, the idea of the flâneur and so on.”

Dziadosz hastens to add that the program insists on the integration of theory and practice. “The difference between our course and a more conventional course, at least from what I can tell, is that the practical element of the course is tied with theory and history of media in an intimate way. Literally we have sessions that move between an editing exercise and a discussion of Soviet montage. We do both right in the same session, so there’s no division between the two.”

The Lab also hosts interdisciplinary filmmaking events that bring together wildly disparate people to engage with ideas from different viewpoints. For the “embodied mind” event, for example, people with expertise in dance, neuroscience and filmmaking came together, while for the “mediated city,” people from diverse backgrounds grappled with what Dziadosz describes as the “saturation of the urban environment by media.”

Looking toward the future, Dziadosz and Ford gratefully acknowledge the Lab’s relationships with Birkbeck and the University of Pittsburgh. Dziadosz adds, “We’re growing rapidly and developing in a few directions. We will continue simply to produce more films, and we have a few things in development. One is a project related to slums in India. We will also be developing experiences in VR, and we are going to open up more short courses to scholars. We think this is a model that can work, both inside the U.K. and beyond. Finally, we’re also putting together a conference on fair dealing and its limits.” Dziadosz adds one final comment to sum up: “Our main impetus right now is simply to produce amazing film essays.”