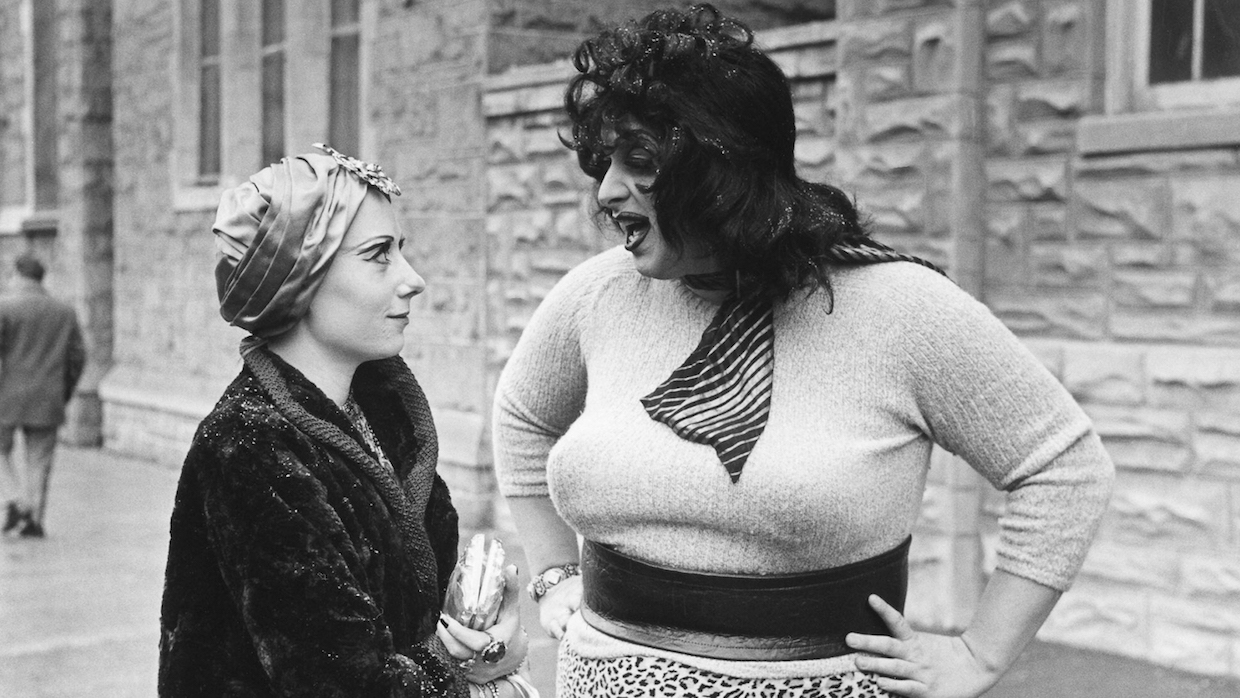 Shock value in cinema is a tricky thing, especially when it comes to posterity; what scandalizes one generation often seems mild to the next, while images and dialogue that might have seemed innocuous in another era – particularly when it comes to attitudes about race, gender, and sex – can come across as abhorrent to audiences discovering them in a different cultural context. Two genuinely transgressive films, movies that were shocking when they came out and are shocking now, are newly available in generously appointed Blu-ray editions: John Waters’ Multiple Maniacs (1970) and Takashi Miike’s Dead or Alive (1999). Waters had been making underground films for several years when he embarked on Maniacs, but artistically it was his breakthrough: his first sync-sound movie (and thus the first to contain his wickedly funny and abundant verbal insults), it laid the groundwork for the Molotov cocktails to come – films like Pink Flamingos, Female Trouble, and Desperate Living that expressed their disgust with hypocrisy and repression through a trenchant yet lighthearted satiric voice. That voice is undiluted in Multiple Maniacs, which Waters wrote, produced, directed, edited, and photographed; what it lacks in technical polish (though it looks awfully good in Janus Films’ new restoration) it more than makes up for in the ferocity of its world view.

Written and shot after the Tate-LaBianca murders but before the Manson Family had been named as the culprits, the movie hilariously – and occasionally chillingly – evokes the darkness at the heart of Vietnam and Nixon-era America by throwing the values celebrated by polite society into a blender and vomiting them up with the gusto of the “puke eater” in the film’s outrageous opening sequence. That sequence – as well as later ones involving cannibalism, rape, and a sexual act known as a “rosary job” best left undescribed here – retains its impact almost fifty years later, not because it’s graphic but because it’s so authentically subversive on a political and philosophical level. Waters takes aim not only at Eisenhower-era conformity but at the peaceniks and hippies who were rebelling against it; the movie unashamedly revels in its own horrifying violence, an approach that ultimately gives it an impact similar to a very different satirical classic, Stanley Kubrick’s Dr. Strangelove. On the commentary track for the Blu-ray, Waters marvels at the notion that his disreputable film would now be available from the Criterion Collection, but it belongs there as surely as Kubrick’s movie does – it’s a time capsule that sums up its era, has uncomfortable resonances with our own, and reveals an auteur fully formed pretty much right out of the starting gate.

The transgression on display in Takashi Miike’s Dead or Alive is, in a way, more conventional than what Waters was up to; his attack on good taste is less political and more the work of an enfant terrible, a young director out to blow the audience’s mind with his sheer audacity. The opening six-minute explosion of sex, drugs, and violence, all cut together with a frenetic speed that makes Paul Greengrass look like Béla Tarr, feels almost completely incomprehensible on first viewing, as does much of the rest of the film, a cops-and-gangster tale that takes on the quality of a cinematic fever dream thanks to its collage-like approach to narrative. Yet a closer examination of the piece reveals a method to the director’s madness; most of the images, which range from beautiful abstractions of color and light to shocking acts of cruelty and perversion, do connect to each other, and to philosophical musings about class, loyalty, and family that crop up in the frequent conversational scenes that appear between the chaotic opening and finale. Ultimately though, the movie’s real appeal comes in its cheerful repudiation not only of good taste but of generic boundaries and storytelling structure; Miike, like Waters, has a taste for both high and low cinema and gleefully combines the tenets of art house experimentation with those of direct-to-video sleaze to create a wholly unique film viewing experience. Arrow Video has released the entire Dead or Alive trilogy, which consists of three equally stunning but barely related gangster films, as a Blu-ray package that includes both new and archival interviews with the cast and crew as well as a commentary by Miike biographer Tom Mes.

Dead or Alive is one of two Arrow cult items I’d like to recommend this week, the other being a boxed set of the first two House films. Not to be confused with the Japanese Hausu, House (1986) is a surprisingly inventive horror film that’s far smarter and funnier than it probably needed to be given the dictates of the marketplace at the time. Spiritedly directed by Steve Miner as his first non-Friday the 13th film after he helmed parts two and three of that franchise (the producer here is Friday the 13th’s Sean S. Cunningham), the film follows a novelist (William Katt) whose life has been ruined by the disappearance of his young son while visiting an aunt’s house. When the aunt dies, the novelist moves into her place and discovers that it’s haunted – a frightening proposition, until he realizes that it means he might be able to retrieve his son from within the house’s seemingly infinite worlds behind the walls. Screenwriter Ethan Wiley, working from a story by genre fan favorite Fred Dekker (The Monster Squad, Night of the Creeps), deftly creates a protagonist who’s haunted on multiple levels – by the disappearance of his son, by an act he was forced to commit in Vietnam, by the house itself – and gives the suspense a light, humorous touch that shouldn’t work but does.

Wiley stepped behind the camera to direct House II: The Second Story, which almost completely eschews the horror elements of the series to go for straight comedy; it has the kind of inventive supernatural playfulness one associates with something like Tim Burton’s Beetlejuice. Cunningham later blamed the series’ inability to find a consistent tone for its failure to continue (though there were two subsequent sequels), but I think the wildly different direction that House II takes is one of its strengths. Arrow’s “House: Two Stories” collection is a feast for devotees of the franchise, loaded with extra features and including a companion book by House enthusiast Simon Barber, and the brand new restorations of both films will, like that of Criterion’s Multiple Maniacs, provide a practically all-new viewing experience for fans forced to endure the muddy transfers of years past.