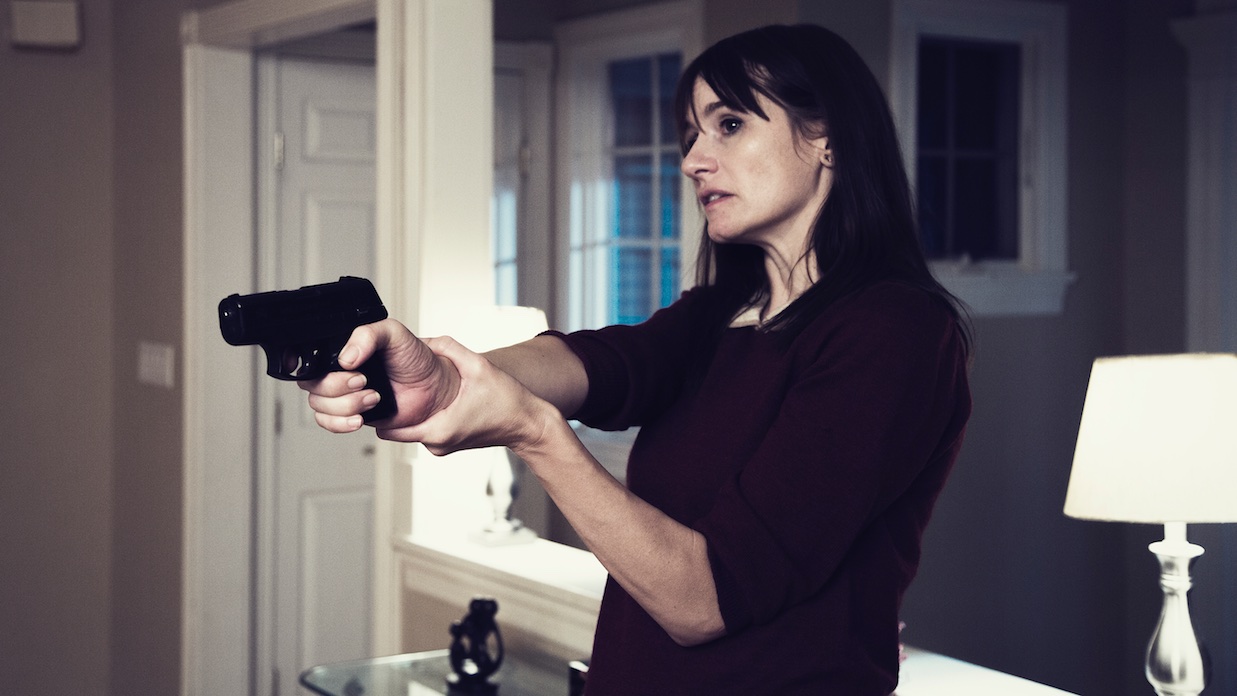 Currently running at the Tribeca Film Festival’s Virtual Arcade, Broken Night is a psychological thriller featuring a quarrelling couple (Emily Mortimer and Alessandro Nivola), an intruder and a handgun. Distilling these elements into 11 taut minutes, the piece throws viewers not just into the action but into the unsteady point-of-view of the short’s protagonist, the wife played by Mortimer, who is trying to reconstruct the events of one violent evening for an investigating police detective. Using a VR headset and browser-based player, Broken Night allows viewers to slip in and out of the wife’s POV, making for her character the various choices she herself can’t remember whether she made or not. As Alon Benari, who, along with Tal Zubalsky and Alex Vlack of the digital studio Eko, created Broken Night, explains below, the piece is an experiment in interactivity, one that seeks to infuse more dramatic structure, psychological motivation and directorial intent into the sort of piece that often becomes a “choose your own adventure” free for all. Warning: the below interview contains spoilers.

Filmmaker: So, I watched the piece just once, but I’m assuming that while I made different choices in the middle of the piece, by the end, I was watching the same ending as everyone else. Is that the case?

Alon Benari: Yes. There are multiple ways to experience it, and based on your choices you can construct her memories in different ways. But the last scene, which reveals what really happened, everybody sees. I think that’s part of our agenda, to shift how you think about interactivity. The go-to state of mind for many filmmakers when they think interactive is “choose your own adventure.” You can go to the moon, or Paris, but besides being very difficult on production, the bigger challenge you have [with that approach] is that it becomes gimmicky very fast because every choice needs to be crazy and different. We know how have difficult it is to tell one good story, so try telling 16 or 32 good stories with different endings that will be emotionally impactful. What you want to do, and this is something we took from the world of narrative videogames, is to use interactivity to create a higher level of immersion, involvement and emotional attachment to the characters. Interactivity isn’t about surprises — it’s another tool for the filmmaker to get the viewer to feel empathetic to the character, or to feel complicit in what’s going on, or to feel engaged in the story. What we tried to do here is plant you in her mind. There are first-person scenes happening in her mind, and you’re trying to construct her memories. And she herself is not sure about her memories. Interactivity is not so much about the construction of the story — it’s about getting the emotional impact of the story.

Filmmaker: You’re also playing with gender when it comes to point of view. The choices all involve you following either the man or the woman at different points.

Benari: It’s interesting, I actually never thought about it in that direction, but you’re right. Can I spoil the story here?

Filmmaker: Go for it.

Benari: The detective tells her, “Look, your husband was shot. What happened?” And she’s not sure. She’s like, “Okay, I remember we came in, but then it was a blur.” And then she starts telling the story. “I think he took the gun…. No, I stayed with the gun.” And then the detective is like, “That doesn’t add up.” “Okay, so maybe I did have the gun. And then he got shot, but it couldn’t have been me.” You go through this process with her; you are trying to piece together the story.

Filmmaker: I watched it once, and, as we discussed above, the different branches do take you outside of her POV.

Benari: But it’s still the story she is telling. What we wanted to do [with the branching] is get you deeper and deeper into the story. The first choice is low-stakes — two versions of the same dialogue. In one, he’s more aggressive, and in one he’s more apologetic. It’s more to set you up to understand the mechanic, how the choices work and your ability to affect the story. And then the second choice happens once they understand there is an intruder in the house. That’s the first significant twist: Will he take the gun, or will she take the gun? So this [choice] helps establish her as an unreliable narrator. I want you to feel fully engaged with her, and then at some point realize that she’s actually unreliable and that you’re not sure who to trust. And then we get to the climax of the evening, when he gets shot, and there are four different ways he gets shot, and they are all wrong. Regardless of what you choose, the detective always says, “This detail doesn’t make sense.” And in the very end, there are nine different ways he was shot.

Filmmaker: How did you develop the emotional narrative, which hinges on the psychology of Emily’s character?

Benari: We spent some time with a therapist constructing how the story would work in her mind assuming she’s not a sociopath — which was our [first] assumption. The idea is that something in this stressful event triggered a traumatic event from earlier in her life, and this becomes a case of disassociation. Something that was shut out pops out, she does this violent act, and then it is shut out again. She actually does not recall what happened that evening.

Filmmaker: I assumed she was dissembling from the beginning. Maybe that’s just due to the set up of her being interrogated by a police investigator. It’s such a classic set up from so many crime shows.

Filmmaker: Tell me about Eko, your company, and how Broken Night fits into your larger work.

Benari: This is an anomaly in our work. Our company builds a media platform for the creation of interactive and non-linear stories. Almost all of our work is in regular video, not in VR. We started in Israel with a very small team and were making music videos. Our CEO is a very well known musician in Israel, and our head of product here was the guitar player in his band. We all stumbled into making interactive music videos. Once we started the company, got funded and moved to the U.S. we shifted into the advertising space. Over the last year our major focus has been on original content — long-form, interactive entertainment. Kind of a hybrid between film/TV and videogames, bringing interaction and immersion into live action with good stories and good characters. We are working now with multiple production partners, and our big projects are a new version of Wargames as an interactive series, and a new version of Twilight Zone with CBS. And we are launching five new projects with Sony and multiple projects with Warner Music Group.

Because the VR space is making a lot of progress, and we do like to think of ourselves as standing at the forefront of storytelling and technology, we felt that we needed to move into this space as well, and we developed our player. Part of the methodology we have here at Eko is we don’t want just the engineers and the product team to define the product. We try to have a creative project that is the defining demo for a new product, so we put together this new project as the basis to develop an HTML player that allows for real-time assembly of video. So, while you are watching the video, in a completely seamless manner it is shifting [between different branches].

Filmmaker: And the player is browser-based?

Benari: Correct. Our mainstream player is not VR, it plays within social media and on any web-supported device. What we did in VR is port that player to the VR space. There is something in VR that lends itself to our platform. In our regular videos you need to have some kind of interface — buttons, controllers swipers. With VR and through the headset, just by looking you can make a choice, You don’t even need to have an interface on screen. That was our challenge: Can we do this without having any kind of timer, time to choose, or buttons [telling you to] look this way or look that way.