“She Knew Then That She was Going to Die of Her Femininity”: The Making of the Ayahuasca Drama Icaros: A Vision 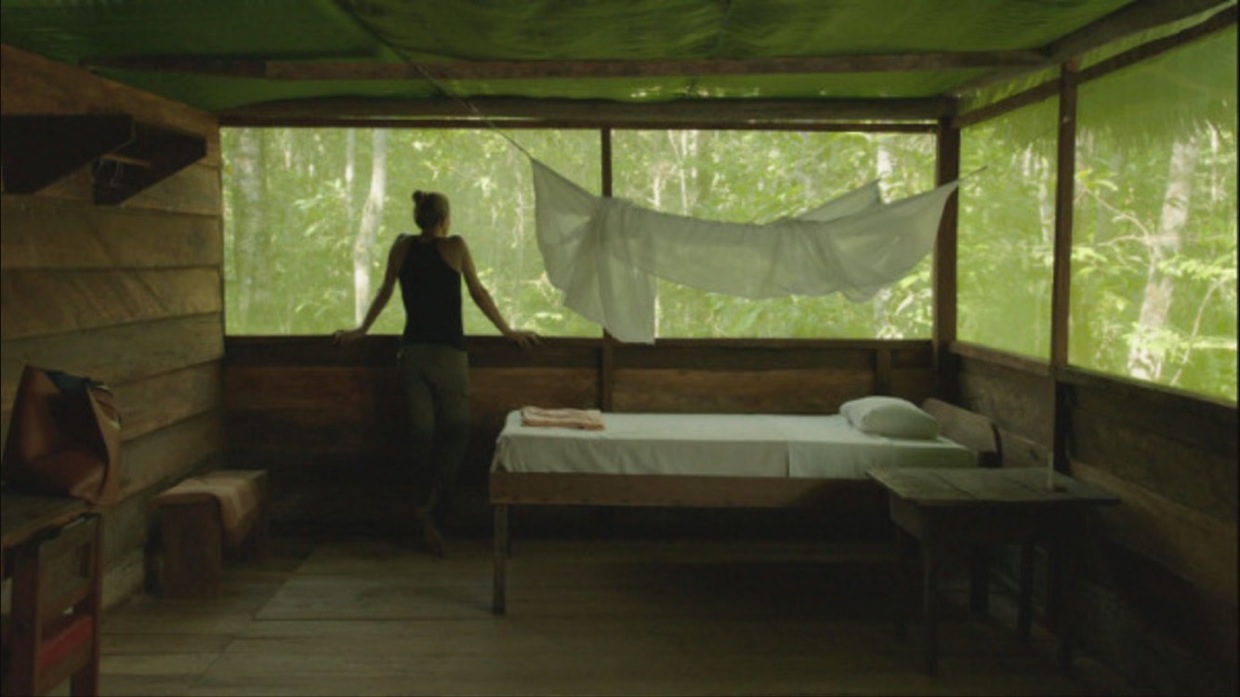 In November 2012 Leonor Caraballo travelled to a healing center in Iquitos, in the Peruvian Amazon, with her friend and fellow artist Matteo Norzi.

At the center Caraballo and Norzi drank ayahuasca together in ceremonies led by a shaman from the local Shipibo-Conibo people. During the first night’s ceremony, under the influence of the hallucinogen Caraballo had a dream vision that she later recounted to Norzi.

It was a memory from her adolescence of horse riding with her uncle on a beach in Argentina. At some point during the vision she found herself laying belly down on the beach trying to bury her breast in the sand. In that same moment she thought of her grandmother – after who she was named – who died from cancer not long after she was born.

“She knew then that she was going to die of her femininity,” said Norzi. “This is how she got to know about her destiny, through an ayahuasca vision.”

Undeterred by the intensity of that first experience Caraballo continued to take part in nightly ayahuasca ceremonies with Norzi, in the course of which another important truth was revealed to them. It became clear to them that they were unhappy in their careers as visual artists. The two friends committed there and then to abandoning the art world to become filmmakers. “We changed the direction of our lives from one day to the next,” said Norzi.

They decided to co-direct a movie directly inspired by their ayahuasca experiences (the feature, called Icaros: A Vision, is set for release in the US and Europe this summer). They conceived of a story about a shaman who is losing his sight, juxtaposing the onset of his blindness with the visionary insights he offers his western clients. They returned to New York to work on the project and by the following spring had made sufficient headway to come back to Peru for pre-production.

Just before this second trip Caraballo felt a pain in her ribs. During the journey the pain got worse and on her return home she went to see a doctor. Five years earlier she had had a tumor removed from her breast but since then all the signs had been positive.

Her surgeon reassured her that the pain was probably just muscular but tests confirmed her worst fears. The cancer had not only returned it had spread, metastasising in to her bones. (Interestingly, in the childhood memory she saw on ayahuasca she and her uncle had been riding to see the petrified bones of a dinosaur fossil.)

The doctors told her that the disease was terminal. Against their advice and after much soul-searching, she decided to push on with the film, committing herself to a grueling location shoot in equatorial jungle.

“By engaging in this project she was saying, ‘I don’t want to sit back and wait for it,’” said Abou Farman, Caraballo’s husband. “It wasn’t this open-armed embrace of death. It was just another way of relating to the present, of moving forward in time.”

Farman came on board as the film’s producer and, over the course of the next year, joined Caraballo and Norzi on several further pre-production trips to the Amazon. As the trio prepared for a 2014 shoot, they re-shaped the plot to mirror Caraballo’s experience.

The shaman’s failing eye sight became a subplot as the focus shifted to a sick western woman who has come to the center for healing. While her illness is never revealed in the movie the character (played by Ana Cecelia Stieglitz) is called Angelina, a reference to Angelina Jolie who went public about her double mastectomy in 2013 after discovering she had inherited a gene mutation associated with higher cancer risk. Caraballo carried the same mutation.

Meanwhile, Caraballo’s original MRI scans became the movie’s opening shots. This served a double purpose, said Norzi, offering insight into Angelina’s back story but also into the ayahuasca experience itself.

“From the beginning we saw an analogy between ayahuasca and the diagnostic tools of the hospital,” he said. “Both generate visions. Both work with vibrational fields and the feedback gives some sort of image of the disease.”

The analogy between ayahuasca and medicine is something advocates of the plant brew often stress. Among Amazon tribes, its curative powers have long been recognised and, in the last two decades, a growing number of westerners have been drawn to it seeking help for their own malaises.

“There are research scientists in the North America and Europe who are looking at the plant’s usefulness in treating depression and PTSD, even corporate burnout,” said Jeremy Narby, an anthropologist who has written extensively about the plant.

According to Narby the plant works in part by cleansing the body. The ayahuasca ritual is known locally in Peru as “la purga” (the purge) and many of those who drink the brew experience extreme physical symptoms, vomiting and crying sometimes for hours on end.

“It cleans out your intestines and, as we’re increasingly beginning to understand, the intestines are extremely important not only to physical health but also to our psyche,” said Narby, who points to degenerative disorders like Parkinson’s, which were previously thought to originate in the brain but are now thought to be caused by neuronal dysfunction in the gut.

Harder to measure than the physical side-effects are the visions that the drug produces, which can be at times blissful, at other times terrifying, and often insightful. Addicts who have taken the drug, for example, have reported being shown things that help them make sense of their addiction.

“When we see images with our eyes closed on ayahuasca TV we don’t know where those images are coming from,” said Narby. “The conventional scientific idea is that it’s coming from the attic inside the unconscious mind, but ayahuasca drinkers know that can’t be true because a lot of the stuff you see you’ve never seen before, and it’s out of this world. There’s something very mysterious going on.”

Adding to this sense of mystery is the drink’s origin story. The ayahuasca brew is made by combining the leaves of the chacruna plant with the caapi vine. The chacruna leaves contain dimethyltryptamine or DMT, a powerful hallucinogen found naturally in many organisms. Under normal circumstances the body’s enzymes break down DMT, but the caapi vine contains an enzyme inhibitor that allows the compound to flow freely to the brain. How tribes deep in the Amazon stumbled upon this sophisticated feat of chemistry is a riddle that remains unresolved.

Among the Shipibo an answer to the riddle comes in the form of a myth about a revered shaman who told his followers that after he and his wife died they should tie his body to the branch of a tree and bury his wife at the tree’s base. According to the legend, out of the corpses grew the caapi vine and the chacruna plant respectively.

Caraballo had grown close to the Shipibo in the course of her first visit to the healing center, in particular a young shaman called Arturo Izquierdo. When they returned to Iquitos to shoot the movie in August 2014 they asked Izquierdo to play the shaman who is going blind. The five-week shoot proved a battle as they struggled to come to terms with the logistical problems of shooting in remote jungle.

Before they even began, a barge carrying two trucks of equipment was hijacked by drug dealers and the crew’s production vehicle was destroyed in a collision with a water buffalo. As the shoot got under way the data manager fell seriously ill after contracting Leptospirosis, a bacterial infection spread by jungle rats. One of the cooks, meanwhile, was hospitalised with malaria.

These setbacks led to tension with the Peruvian crew, said Norzi.

“When you’re first-time directors you have to fight for your authority,” he said. “We found ourselves not being respected from day two.”

In the midst of these tensions Caraballo, who by this point had advanced metastatic cancer “that was being held in check by something,” pushed on, displaying a perfectionism that threatened her already fragile health. In one scene, for example, where Angelina is meant to take a tumble while zipped up inside a portable sauna, Caraballo was unhappy with how Stieglitz was falling. After several takes she told the actor to step aside and did the fall herself to show how a sick person shows pain.

When the shoot was over she returned to New York and within a month the cancer began to spread more rapidly. “What is true and devastating to me is that I have no doubt that the shoot exhausted her body,” said Farman.

With her health deteriorating she worked on the film right up until the end, discussing the first stages of the edit as she lay on her death bed. But even after she passed in January 2015 the collaboration continued, said Norzi.

“Shamanism is a tool for exploring your emotional memory or your spirit world,” he said. “People you care about who have died live in that dimension. We kept on trusting her presence not only in our memories but also in our dreams.”

And what direction did she offer from the after-life?

“All the scenes that Matteo and I imposed her in the script and she said, ‘No, they’re stupid,’ were gone by the final edit,” said Farman. “She was trying to tell us, ‘See! Told you!’”

Icaros: A Vision opens at the Metrograph for a one-week run on May 19th. For additional dates click here.