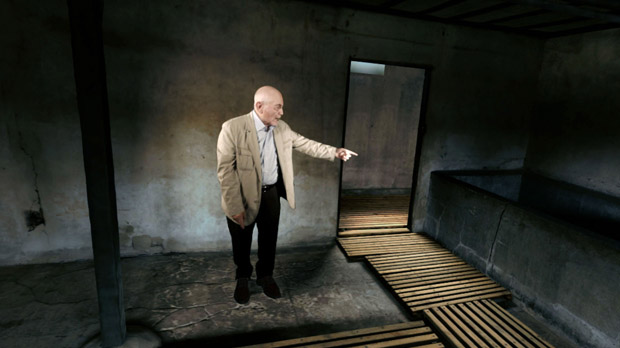 by Randy Astle
in Directors, Interviews
on May 1, 2017

Perhaps the most powerful piece at this year’s Storyscapes, the Tribeca Film Festival’s annual survey of the biggest and best in new virtual reality work, was The Last Goodbye. The pieces’s concept is both simple and ambitious: to have a Holocaust survivor guide the viewer in a tour of the concentration camp where he was interned over seven decades ago. Pinchas Gutter, who as an eleven-year-old boy lost his entire family at the Majdanek Concentration Camp in Poland, fills this role admirably. Locations include the camp grounds, cells, and an incinerator, but despite the breathtaking technical achievement of the footage — in most locations viewers could walk around a space measuring several feet in diameter to examine the camp in detail — and its chilling ramifications, I found it nearly impossible to pull my eyes away from Gutter’s face. The depth of his pain remained strikingly fresh, and his strong but tremorous voice and the shine in his eyes pulled me into his personal experience as though he were standing right beside me. In fact, only once was I able to easily follow his gaze and rest my eyes looking where he was looking: inside a mausoleum of human ashes built to memorialize the victims, including Gutter’s parents and twin sister. The fact that his image appeared somewhat ghostly as part of a composite electronic image only added to the ethereal presence of the entire experience; in a nearly metaconscious way, he repeatedly discusses losing his memory of his sister’s face — now all he can recall is her braided hair — in a way that somewhat mirrored his own shimmering image in my headset.

The Last Goodbye is a collaboration between several producing entities –HERE BE DRAGONS (which had its name on several pieces at Tribeca this year), the USC Shoah Foundation, MPC VR, and OTOY, Inc. — and it was created by Gabo Arora (the U.N.-affiliated director of the outstanding VR documentary Clouds Over Sidra) and veteran producer Ari Palitz. Its reconstruction of a room-scale explorable space in live action rather than animated footage is remarkable. The presence of the camp is palpable. After about one minute of viewing I was thinking about Walter Benjamin and the aura of physical objects over their mechanical reproductions, then after another minute about the use of 3D in documentaries like Herzog’s Cave of Forgotten Dreams to recreate absent spaces in depth, but then the footage grew so compelling that I decided that either Herzog or Benjamin would probably have approved of a VR construction of the Chauvet Cave or the arcades of Paris; after about another minute more, it became impossible to keep analyzing the experience so dispassionately. Something about the Majdanek Camp — and Gutter’s personal story in particular — was making itself felt. This was surely the closest I’ll ever come to touring a concentration camp with a former prisoner, and it felt, for all its artifice, real…and important…and moving on a personal level, not as an example of something that comes with obligatory importance because of its subject matter. I was immensely impressed by the technical achievement that will make this experience available to hundreds or thousands of viewers for years to come (the project is the first virtual reality piece to be archived by the USC Shoah Foundation). Palitz told me more about the project via email.

Filmmaker: There are several organizations involved with this project. How did it all come together, from the initial idea through putting together all the producing partners? Who was the initial creative impetus?

Palitz: Gabo Arora, the co-creator on the project, met Pinchas Gutter, whose testimony we capture in ​The Last Goodbye, at the Sheffield Doc/Fest, along with Stephen Smith of the USC Shoah Foundation. He heard Pinchas’ story and was incredibly moved to capture it in VR. When I heard his story, I knew it was a powerful story that would really build on the work I had already done with Gabo since he made his first VR film, ​Clouds Over Sidra. We have been constantly thinking how we can continue to evolve the grammar of empathy VR that that film, and all the UNVR films, helped establish. We were really fascinated by room-scale VR and volumetric capture, though none of them had the aesthetic quality or emotional resonance we were happy with given where the tech is at this point. We thought, what would it take to make a “live-action” realistic looking environment that one can walk around in? Everybody told us it couldn’t be done convincingly, though almost all of what we have done previously together has taken the creation of new technologies and hacks. So after understanding what this story would require, we started researching and playing around with the VIVE and photogrammetry, and then we built a new camera system with Here Be Dragons, and worked with brilliant people like Kate Wurzbacher, our DP, who helped us brainstorm how to make this work on a technical level with our other co-producers Otoy and MPC.

Filmmaker: So this was always conceived as a VR piece, but why do it as virtual reality rather than a traditional film or video? After 70 years of documentaries about the Holocaust, what did virtual reality bring to this particular project?

Palitz: We were very conscious we not only needed to make this story for VR, but also add something new to the impressive canon of work dealing with the Holocaust — like Shoah by Claude Lanzmann and the graphic novel Maus, two particular touchstones for us. ​The Last Goodbye gives you the possibility to not only be in the space, but walk alongside and with Pinchas, so you can get an experience that only works in VR. Pinchas also tells his story in a way that is unique to most testimonies — it’s that he relives it with you. There is a harrowing feeling of getting an 85-year-old man to make you feel like his 11-year-old self that survived while the rest of his family died. That takes going to a deep place within. We were honored that Pinchas allowed us to share this with him.

Filmmaker: Can you describe the technical process involved in creating the virtual spaces a bit more?

Palitz: We used photogrammetry, which involves taking 10,000 photos of each space in the experience, that we then composited together using the gaming engine UNITY. Then we shot and merged in stereoscopic VR footage that syncs with Pinchas on site. The total immersion for the audience comes through being able to walk around the real spaces and dimensions.

Filmmaker: What was production like for you on a personal and emotional level? It’s a topic that many of the team members have worked on for a long time, but was there anything different about visiting the Majdanek camp with Pinchas and working with the footage afterward?

Palitz: Gabo and I both, at numerous points during the edit, would need to excuse ourselves to go to the “bathroom.” There were a lot of tears — the process of shooting him on the ground was emotional. But on set you really have a lot on your mind to get the footage and manage the technical challenges that come up in a shoot. It was really afterwards that we got a sense of what we witnessed and how strongly his story resonates with what is happening now in the world. Pinchas is deeply moved by the refugee crisis and what is happening in Syria. It is incredibly powerful to be moved by his courage and borrow from it in the ever increasing turmoil we see in the world.

Filmmaker: VR is presumably still in its infancy, yet The Last Goodbye is being archived by the USC Shoah Foundation. What’s the process for ensuring the long-term accessibility of a virtual reality project, and how will it relate to the foundation’s video archives of the Holocaust?

Palitz: This is the first VR testimony to be captured and preserved by the USC Shoah Foundation. It’s inspired by and adheres to the rules of the Shoah Foundation around realistic capture over artistic interpretations. The co-producers, who are all pioneers in the VR space, are hopeful to turn this prototype into a series of room-scale documentaries. There is already a potential to cover the genocides in Rwanda and Guatemala, but funding continues to be a bottleneck.