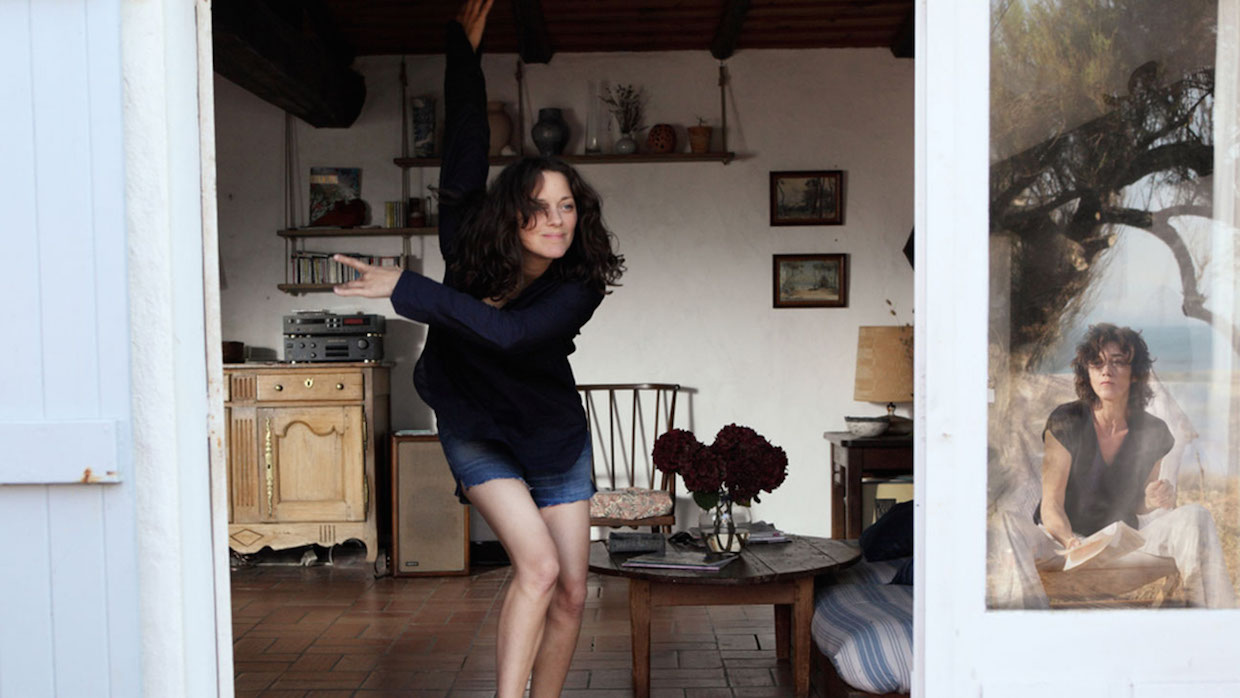 It’s fitting that the Cannes film festival, presently celebrating its 70th incarnation, would choose to open this edition of shameless and unbridled self-reflexivity with a film that does the same. Arnaud Desplechin’s latest, Ismael’s Ghosts, is pure, saturated Desplechin (at least when he isn’t tipping his cap to Hitchcock’s Marnie and Vertigo), perhaps to a fault. Detailing a years-spanning love triangle set to its maker’s characteristic whip-pan rhythm, this is a vision so consciously expressive and overloaded with formal decoration (time jumps, iris-ins, rear-projection montage, direct address to camera and so on) that it finds itself explicitly likening its manically layered structure to Jackson Pollock’s Lavender Mist — an abstract swamp of dribbled information that, if considered in the context of the artist’s earlier works, can be seen as a figurative depiction of “all the women he could never touch.” That quoted line, spoken by Ismael (a film director played by Mathieu Amalric, certified alter ego of Desplechin’s libido), combines with other self-deprecating winks and nods (“You’re afraid of the film’s subject,” “All you can do is direct!” etc.) to make this a picture that feels especially specific to Desplechin’s personal history.

A film that features what may be more than two dozen utterances of the phrase “I’m too old now,” Ismael’s Ghosts shows, but rarely complicates, the sense of anxiety and repentance that a man might experience when the final traces of his youth finally evaporate. Impossible reunions and spontaneous hook-ups abound, quixotically resurrecting past relationships and desires in glossy movie terms. These are expressions of sentimentality and longing that are clearly informed by experience, but they are so caked in make-up that they tend to feel like an affectless form of camp. There’s a spirited and capricious tenor beneath it all that brightens its emotional axis, while elsewhere the narrative liberally juxtaposes various horror, rom-com and espionage tropes against classic Hollywood hat-tips (“five films compressed into one,” Desplechin boasts in the press kit). The dissonance this creates between its surfaces and its thematic preoccupations is fresh and inviting, and yet I couldn’t shake the treacly impulses at play, many of which would likely only be cathartic for its maker. This is fine, because not all art is made for or needs to appease an audience. But these are bells and whistles that give me pause. (Worth noting that after the press screening, it was revealed that Cannes opted to screen what’s being described as a shorter, more sentimental cut of the film, as opposed to the more “intellectual” director’s cut.)

On the other hand, Andrey Zvyagintsev’s new film, Loveless, is as unsentimental as it is dim (in every sense of the word). I try to avoid form/content dichotomies, but “technically impressive” is about as close to a compliment as I can lob at this misogynistic, portentous and vapid film about a divorcing Russian couple’s missing 12-year old son. Set at the end of 2012 and defined by its slow, measured push-ins and meticulously choreographed staging, Zvyagintsev’s latest looks and sometimes even feels like a work of careful formal consideration and deep political engagement, littering its mise en scène with explicit references to Russia’s recent political climate, indications of the country’s worsening relationship with Ukraine and the apocalyptic ethos spawned by the end of the Mayan calendar. The dramaturgy is marked by cliched representations of marital strife — arguments, shaped by innocuous growling and scowling, are devoid of any sense of propulsion or natural development despite having likely been modelled after similar quarrels seen in recent Romanian New Wave efforts — and its images of wintry, bourgeois solitude are as pretty as they are obvious.

Todd Haynes’s Wonderstruck has also divided the festival’s press corps early, and I’ll have to assume the naysayers are mostly balking at the seeming incongruity of an intellectual Sirkian taking on a treacly children’s story. Splitting its time between twin narratives that play out fifty years apart — one in the late ’70s, the other in 1927 — gradually bridging their commonalities until they converge in an emotional and surreal climax. Haynes co-opts a silent film aesthetic for the 1927 branch of the film, putting other recent silent-era pastiche projects (viz. The Artist [2011] and Blancanieves [2012]) to shame with his ability to evoke authentic textures and compositions in his appropriation of that gimmick. He doesn’t confine himself to the actuality of his historical sources, taking liberties with his music choices (Carter Burwell’s score, which takes turns between evoking photoplay music and plucking on electric strings, is an MVP candidate) and the aspect ratio, which conforms to the ’70s section’s CinemaScope widescreen format.

There are weak points here and there. For one, Oakes Fegley, constituting the emotional center of the film as a 12-year-old boy attempting to find out who or where his dad is, lacks charisma and other virtues one might typically associate with thespian excellence. But Haynes’s commitment to risky ideas — like filling a kid’s movie with so many deaf characters that at least 25% of the action consists of laborious attempts to communicate nonverbally, usually by watching characters write out their dialogue by hand and then seeing someone else read it — pay off and keep the film from falling victim to its own template. This is a decidedly schematic movie, but I found myself unable to gauge what it was becoming, or what sort of affective terrain it was moving into, at any given moment, and this is true right up to the end — which is loaded with schmaltz but, I admit it, kinda got to me.