Night School Director: “Why I (Only) Make Films in the Midwest” 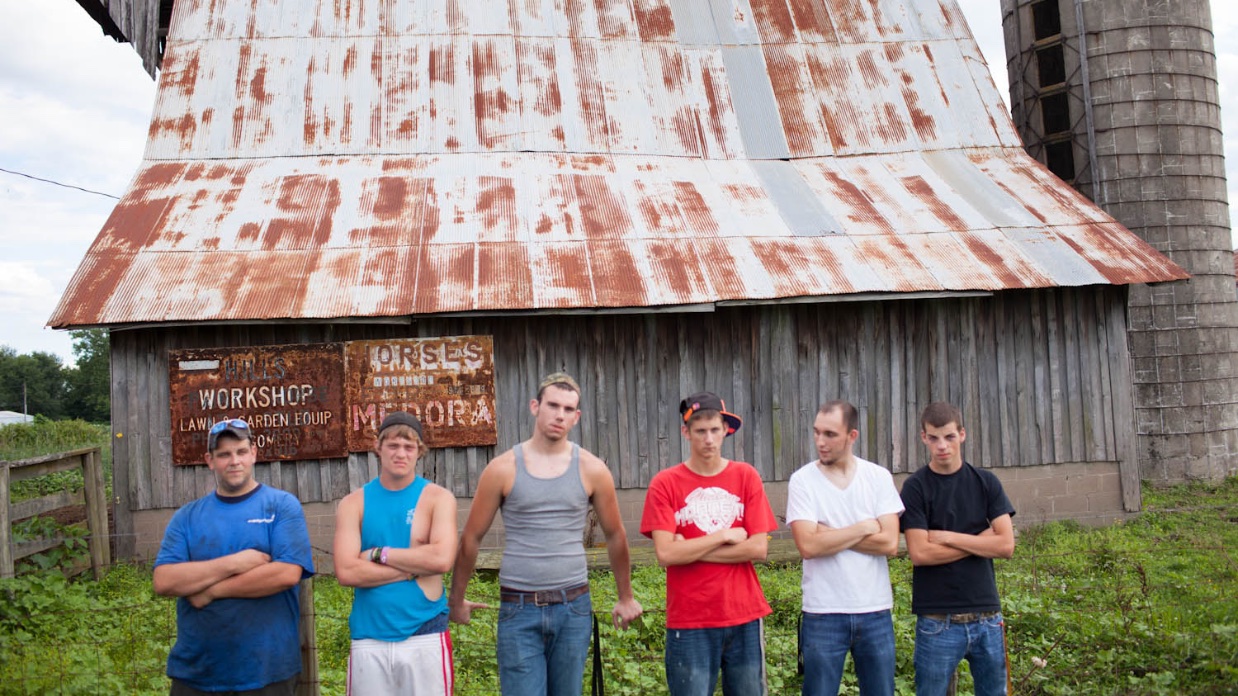 With Oscilloscope releasing his latest documentary, Night School, this Friday in New York at the IFC Center and June 23 at the Laemmle Theater in Los Angeles (with nationwide roll-out to follow), filmmaker Andrew Cohn posts this guest essay about his choice to make films largely in America’s heartland. Here he recounts his experience making his previous film, Medora, and how it made him question the motives and strategies many non-fiction filmmakers bring to their depiction of Midwestern subjects. Oscilloscope will donate a portion of all proceeds from ticket sales to educational initiatives at Goodwill Industries’ McClelland Scholars, the organization featured Night School.

The train station in Albion, Michigan was otherwise empty. Across the tracks, two vagrants pushed shopping carts toward each other in a game of chicken, one flaring his middle finger at the other as they passed. I had just finished a brief stint as a visiting scholar at Albion College, speaking about my documentary filmmaking process and practices. Albion isn’t unlike many small, dwindling towns across the Midwest. If you squint your eyes hard enough, you might be able to picture a bustling downtown, although those days seem long forgotten.

Once in the dining car, I ordered a hot dog and a beer. “That’ll be $11.50,” the lady at the counter declared. “That’s it?” I joked, pulling a wad of bills from my Jansport. “Ballpark prices,” an elderly ticket collector chuckled in passing. It’s funny how trains can get you feeling nostalgic. I was headed due east to Detroit, where they would screen my latest film, Night School, at Oakland University. As we rumbled through southeast Michigan, we’d soon pass my hometown of Ann Arbor, Michigan, or as I like to say, “50 square miles surrounded by reality.”

Looking back on it, growing up in Ann Arbor was obnoxiously adorable. There were frequent trips to the children’s museum and afternoons spent riding bikes to the local baseball card shop. I grew up in a liberal oasis, oblivious to the struggling farms and dwindling factory towns that surrounded us. While the rest of the Midwest was going through unprecedented upheaval and strife, I was taking tennis lessons and sucking down frozen yogurt at the local food court.

That all changed when my parents got divorced. I was 11, and my mom, who was suddenly out priced from Ann Arbor, moved me and my brother to a tiny farming community 30 miles east. The rent was cheap, and it was a relatively short drive to my father’s house where I stayed on weekends. Instead of blossoming within the confines of an affluent college town, I found myself a latchkey kid struggling in all types of ways.

To say the move was a culture shock would be an understatement. Just a year earlier, me and my brother weren’t allowed to play video games or have squirt guns. Now, WWF and 4-H were at the forefront of lunchroom conversations. The audacity of using both straps of one’s backpack was looked upon as a sign of weakness. But I slowly adapted like any other kid would. I took in the occasional tractor pull and joined the football team, made friends and had my first kiss. 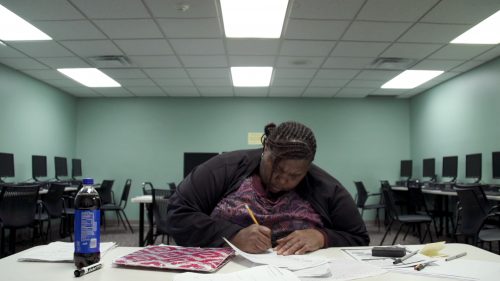 I got through high school by the skin of my teeth. Trouble with the law and an affection for weed and hip-hop followed me throughout my college years, where I eventually cobbled together enough credits to graduate. I headed to Los Angeles to pursue a screenwriting career and found some minor success. I optioned a screenplay to a production company and directed a few short films, one of which landed on McSweeney’s Wholphin series. Far away from Michigan, I was honing my skills as a storyteller and slowly finding my voice. I wrote about the people and places that made up my childhood: the local barflies at the Elks Club, the ex-factory worker turned delivery driver, the single mother raising two boys on minimum wage. As the Midwest grew further away geographically, it was becoming more and more vivid in my work.

It was late 2010 when I got a phone call from my good friend Davy Rothbart. He’d read an article in the New York Times about the small, struggling town of Medora, Indiana and its winless high school basketball team. Years earlier, I had worked for Davy at FOUND Magazine. It was Davy who inspired me to start writing in the first place, giving me the confidence and opportunities vital to any young aspiring writer. He taught me how to tell stories with empathy and restraint, and that no matter what, giving a clear voice to your subject was the most important role of a journalist.

Davy asked if I was interested in directing a documentary with him about the town and the team, and, after reading the article, I was all in. The story had everything a filmmaker could hope for: a cast of lovable losers, a town down on its luck, and overarching themes that deeply resonated with me as a fellow Midwesterner. We packed up our things, maxed out our credit cards and rented a room at a dumpy motel in Southern Indiana for an eight-month stint.

Upon arriving in the town of Medora, many members of our crew immediately felt uneasy. “I’m not sure I feel safe here,” our director of photography noted. The downtrodden town was far removed from the quaint farming communities portrayed in Hooisers. The exodus of a plastics factory, farm consolidation and a methamphetamine boom had all but crippled Medora completely.

But, as we got to know the boys and their families, they reminded me of the kids I went to high school with. They were prideful, hardworking and often willfully ignorant of the complicated world outside of their own. Despite their economic hardships, they were never bitter. They never complained or asked for sympathy. They were full of hope, and Medora became a bittersweet love letter to a dying way of life.

I’m often asked by fellow filmmakers about my experience in Medora, as if an astronaut recounting his trip to Mars. What do they eat? Why do they still live there? Why don’t they just leave? It seems we’ve become so detached from Middle America, it almost feels like a foreign land. There’s the inevitable New York Times think-piece declaring that writers, filmmakers and journalists alike need to give a louder voice to blue collar America, but the truth is, lots of these films already exist (Hands on a Hard Body, October Country, 45635, The Overnighters, Where Soldiers Come From, Racing Dreams and so many more), they just weren’t given much context or a critical eye until these issues began affecting our lives.

I often ask myself whether the documentary community would be asking for a better understanding of rural America had Trump lost the election in a squeaker? My guess is, probably not. And perhaps this is the problem. We refuse to seek out and understand these sometimes uncomfortable points of view until they directly affect us, which is often too late.

As both a filmmaker and documentary junkie, I’m always excited when I see a film which is set in the Midwest. Besides the obvious fact that I was born in Michigan, there’s something so revealing and enlightening about this particular part of the country (especially given our current deep political and cultural divide). Midwesterners are uniquely earnest and forthright, and there’s a humbleness and quiet work ethic that forms the foundation of our so-called “Midwestern Values.” It’s a region that has long mystified politicians for its often paradoxical worldviews. We don’t have the deep cultural identification of the South. We lack the international prestige of the East and West Coasts. But just as politicians have struggled to pin down the region and its inhabitants, so have filmmakers.

Similar to politicians, too often the people and places in the Midwest seem to be exploited by filmmakers as political vessels (I’m looking at you, Michael Moore!). While I mostly agree with the message of these films, they typically project the point-of-view of the filmmaker, not necessarily the communities at large. Instead of giving complex and unflinching glimpses into these places, the film’s subjects simply satisfy the filmmakers’ moral objectives (usually to shine a light on a particular social issue). While their hearts are almost always in the right place, some filmmakers mistakenly view themselves as interpreters, attempting to translate their experience to more sophisticated audiences in metropolitan areas.

More so, documentary filmmakers’ aesthetic approach often reveal deeper attitudes about the region. Impressionistic and sensory driven approaches are often used to romanticize rural and urban strife. Filmmakers attempt to immerse their audiences into a world so different than their own. By artfully observing their subjects in their natural habitat, many hope this type of bare voyeurism is somehow entertaining enough. About one such film, LA Times film critic Martin Tsai poignantly wrote, “Watching the lyrical misfortunes of others is a perspective only the privileged can afford.”

Truthfully, our only real goal when making Medora was to capture the town in the most raw and authentic way possible, and to find characters and story lines we found engaging. Giving the boy’s stories social context or vaguely politicizing it was never pondered. We never sought out particular storylines or subjects to make any type of social commentary. Instead, we explored the subject matter and themes using mostly our instincts. We were living, breathing, and capturing a world not so different than our own. We simply went to listen and document, and using this clear-eyed approach, the themes came out organically through our characters.

I know most filmmakers approach their process with the best intentions. But by seeking out subjects in these regions who conveniently affirm our own (often liberal) ideology and simply serve our own point-of-view, we do a disservice to the complexities of geography, opportunity, race, and the economic collapse of these areas. It was the late director Jonathan Demme who famously said, “When you direct a portrait documentary… you are directing a documentary, the author of which is the person you are talking to.” As documentary filmmakers, our job should be to allow the subjects of our films inform our process, not the other way around.

So, the question becomes: Who are we making these films for, and why? I’m certainly not saying that honest depictions of such communities can’t be captured and articulated by an outsider, but just as in life, we should examine our own perspective, point-of-view, and privilege when approaching these subjects. As a filmmaker, my job is to make movies that change people’s perceptions, not reinforces them. We need more films made from within these communities to give us a critical and accurate account of life outside our own liberal bubbles. Perhaps only then will we get the honest and diverse perspectives we so badly need.

Andrew Cohn is an Emmy Award-winning documentary filmmaker and adjunct professor living between Los Angeles and New York. His most recent film, Night School, premiered at the 2016 Tribeca Film Festival and is being released theatrically in 2017 by Oscilloscope Laboratories. He is the director of the documentary Kid Danny for ESPN Films’ 30 for 30 series and his first film, Medora, went on to win an Emmy for PBS’ Independent Lens series. His new film, Danny Brown: Live at the Majestic, will be released through Apple Music later this year.

Night School premieres June 9th at the IFC Center in New York and June 23rd at the Laemmle Theater in Los Angeles. More info at: NightSchoolFilm.com