“Think About Baldwin’s Words”: DP Henry Adebonojo on I Am Not Your Negro 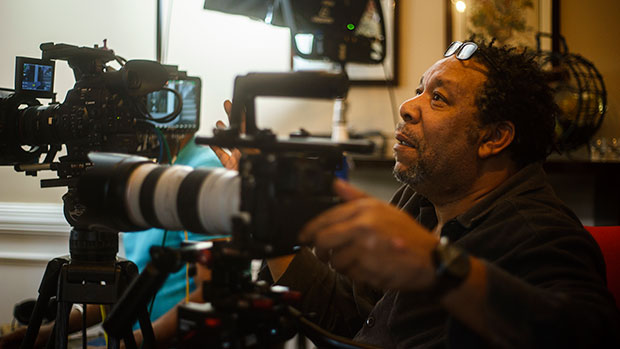 Begun as a recollection of Medger Evers, Malcolm X and Martin Luther King, Jr., James Baldwin’s unfinished manuscript Remember This House tells the story of race in America. Director Raoul Peck used this manuscript as the basis for his film I Am Not Your Negro, currently available on Amazon Prime. Though primarily composed of archival film and still images, it also includes several sequences specifically shot for the film. Director of photography Henry Adebonojo talks about the sequences he shot for the film.

Filmmaker: How did you get involved with this project?

Adebonojo: Raul’s brother Ebert contacted me. He set up a meeting with Raoul and we had a conversation about a rough cut he had to gauge my interest and what I could bring to the story. About two weeks later I was hired to shoot the sequences in New York.

The rough cut was probably about 80% of what the finished film is, with a placeholder voiceover. We discussed elements of the film that were going to stay the same, what needed to be changed and he gave me an idea of what he was looking for, why he was looking for it and what he wanted it to feel like.

Filmmaker: Were you brought in to reshoot film, or shots they planned to do and hadn’t yet done?

Adebonojo: It was a combination. Some sequences had the voiceover but no images, which meant we were going to shoot particular images in a particular context, looking for the right timing or the right element in the frame. There was also some archival material Raoul did not want to use. We weren’t replicating archival material; we were putting in a contemporary equivalent.

Filmmaker: What were the things you were shooting and how did you go about planning and doing that?

Adebonojo: I was sent a narrative layout that said what the images were, what Baldwin’s lines were going to be and what the contemporary equivalent would be. It was a series of atmospheric shots. Some involved movement, some were static in nature. We shot mostly in Manhattan, the Bronx and New Jersey. Some were travelling shots that were designed to evoke a sense of a journey into the unknown so the audience didn’t fixate so much on the road as on the atmosphere, the feeling, the mood. Raoul understood that the greatest power in this piece was James Baldwin’s words and all we were doing was complementing those words. We weren’t necessarily trying to illustrate them in direct terms, it was really more abstract.

The film opens with a conversation with James Baldwin. Then Baldwin talks about his life in France and coming back to America, and we start with the driving shot underneath an overhead train, and it continues for close to a minute; you’re hearing his voice over the top of it. These are the thoughts going through his head about the journey he’s about to make, to return to the United States to dive into the civil rights movement. The one thing that Raoul kept saying was, “Think about Baldwin’s words. Think about the mood, think about what he’s feeling.” Those words echoed in my head every time I picked the camera up to frame a shot. I watched that rough cut probably four or five times before I started shooting.

Filmmaker: In shooting the train sequence, what were you doing to create the mood you wanted?

Adebonojo: I used a car mount on one set of shots for that, but I actually handheld the camera through the sunroof for the shots that wound up being used in the film. Raoul wanted it to be as smooth and hypnotic as possible. Staring up at the metalwork, it’s more about the time of day and the metalwork and the shapes than anything else. I tended to underexpose and have as much blue sky and let the movement be as gentle as possible to let the shapes and patterns of the overhead tracks just do their magic.

In contrast to that, there’s a section where he’s talking about how disruptive race animosities are to forming fulfilling relationships with people. He talks about a friendship he had with a white woman. When they were to meet up or go out at night, they would go to the subway and stand on opposite ends of the platform. We basically shot that as it was — a subway platform with a train coming through. In some cases it was a literal translation and in other cases it was more abstract. 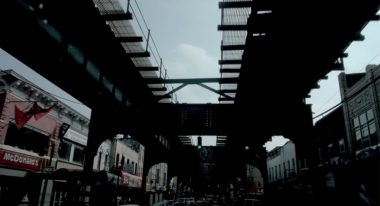 I don’t think Raul wanted to give anybody anything to focus on beyond the words. The archival material that he was using was mostly from the civil rights era, and we were not trying to recreate any of that. We just wanted to make some interesting compositions that conveyed the continuous sense of searching for something, searching for answers. Baldwin talks about the best service he could do in the civil rights movement was to be a witness. In the course of being a witness you are searching for things — you are searching for answers, searching for understanding. A lot of the abstract material had movement involved, and I think the idea was to convey this sense of constantly looking for something.

Filmmaker: Did you have a crew?

Adebonojo: It was a very small crew — myself, a production manager and a production assistant. We had a week’s worth of shooting and we had to be very mobile because we had a lot of ground to cover. For my kit I had the Panasonic GH4, which is capable of outputting a 4K image, which is what Raoul wanted, and I paired that with Canon lenses. I had used the combination numerous times as a B camera shooting documentaries, so I already had an idea of what I could get from that combination. I shot some sample images with that combination, sent those to Raoul to take a look at and he signed off on it. We literally were pulling the vehicle up, jumping out, getting what we needed, jumping back in and moving on to the next spot.

Filmmaker: Were all the sequences shot that way?

Adebonojo: The second phase of shooting, with a sequence of portraits, was a little more involved. Over the course of one day we shot something like 40 different faces. We had slightly more crew for that, but it was still a small-scale shoot. I opted for shooting with a Canon C300 Mark II and a set of Canon Cineprimes.

In the film James Baldwin makes the declarative statement, which is the title of the film. It’s Baldwin’s personal statement, but Raoul I think wanted the audience to personalize this as well. He used a series of portraits from the late 1800’s that transition into the series of portraits that we shot. This has kind of a throughline for anyone in the audience to see if they could identify with anybody on a very personal level, so I wanted to shoot with primes instead of zoom lenses. I also felt that I would use the stronger sensor from the Canon C300 Mark II for the range of skin tones that we were going to have in that segment, and also the luxury of being able to shoot as much shallow depth of field with prime lenses.

There had to be some kind of visual continuity from the early era portraits to the contemporary, even though we were going from black and white to color, from the late 19th century to the present, so we were looking for something to be uniform and one of the things that was uniform was the shallow depth of field.

Filmmaker: Was the camera on a tripod?

Adebonojo: The camera was actually on a sled dolly, because Raoul wanted some very gentle movement pushing in on these faces. We shot both static and with movement. He was more interested in the movement and I think there were rhythmic choices where he picked still photographs. At the beginning of the sequence, the first shot you see is a static image, then he transitions into the moving images interspersed with static images, so it’s a combination of both. We shot with a moving dolly and with a stationary dolly, because ultimately it was about rhythm.

Filmmaker: You were shooting at 4K?

Adebonojo: Yes, we shot at 4K in Clog.

Filmmaker: For the train platform, did you just go down there and grab that?

Adebonojo: We did. We looked into getting permission from the Transit Authority, and it would basically take weeks and we had three weeks, so we just had to go in as bare as possible. In that case it was just the production manager and myself. We carried the camera and we brought a tripod along with us even though we weren’t planning to use it, but we had it in a bag. We just rested the tripod horizontally, sat the camera on top of it and just let the train come.

Filmmaker: Is there anything else you want to say about working on the film?

Adebonojo: If you get a chance to see the film I think you’ll understand that there was a tremendous amount of courage required by Raoul to tell the story in the way that he did. For my part, it was tremendously liberating for him to stick to the story structure that he had in mind, and he challenged me to give him images that allowed him to achieve a vision he was looking for.