Twin Peaks: The Return: Last Looks Before the End 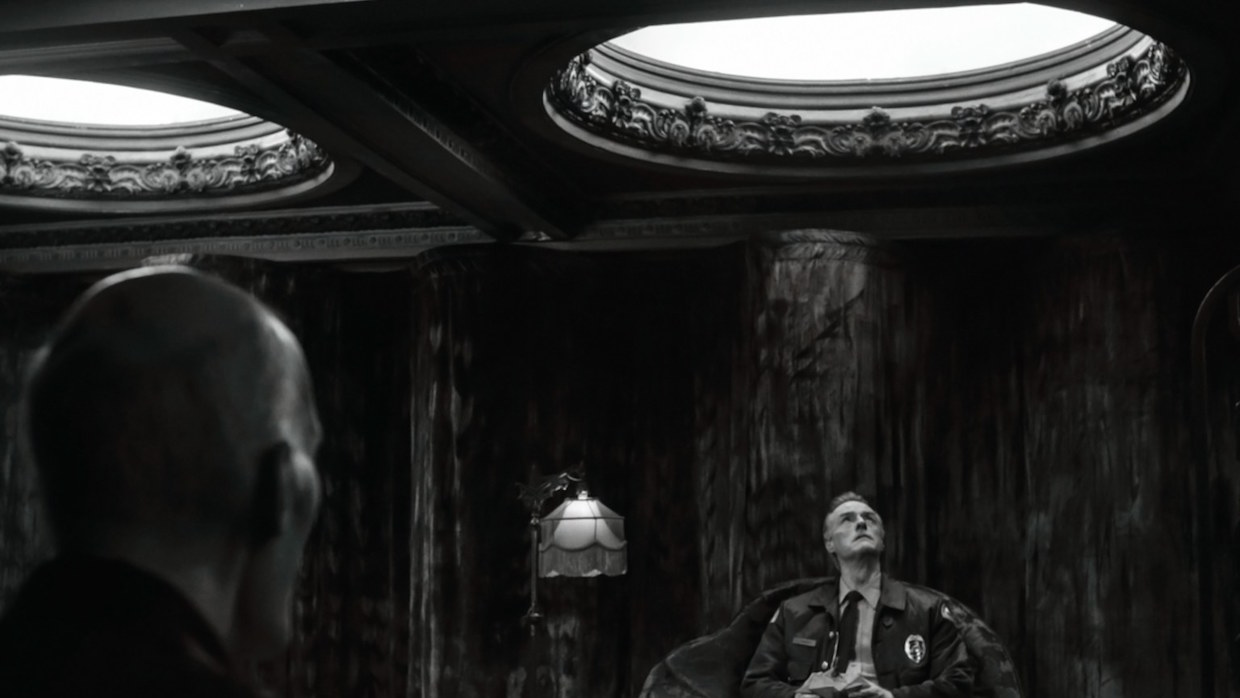 Carl Struycken and Harry Goaz in Twin Peaks: The Return

I took a break from writing about Twin Peaks: The Return to let things shake down a bit, but now seems like a good time to make a few more notes before the end. The first 2.25 of 18 parts were almost total abstraction, and it seemed a matter of necessity to largely abandon that mode for extended stretches before increasingly reintegrating it. We seemed, for a long time, very far from where we started, but The Return has allowed for increasing interventions of the abstract and fantastical alongside its rising dramatic arcs, which have finally run long enough to allow nearly all principal performers significant screen time. The middle stretches hummed with a rigorous, momentum-denying slowness that offered less overwhelming pleasures; we’re returning to consistent shock-and-awe mode as Lynch begins bookending his mammoth effort.

One of the things The Return is explicitly about is how to watch it, and the portal trip Deputy Andy (Harry Goaz) takes in part 14 is an object example. In the Fireman’s (Carel Struycken) realm, Andy sits beneath a window which acts as a screen over which images we’ve already seen flash — some already at least partially explicated, some that still exist solely as mysteries to be appreciated, for now, just on their own textural terms. This isn’t the Kuleshov effect: Andy’s expressionlessly receptive, dramatizing the desired audience response as clearly as the “Spielberg face” (a dramatic push-in close-up on an awestruck character’s face) similarly demonstrates how viewers are expected to respond. If The Return has any serious flaws (and I’m not really prepared to admit that), one might be an excess of material repeatedly, near-redudantly repudiating steady information drip and cohesion: characters consistently puzzling over clues leading nowhere and false leads, anti-climaxing conversations between Audrey (Sherilyn Fenn) and Charlie (Clark Middleton) in which her character (and the viewer) is endlessly denied what she badly wants. If impatient viewers deserve to be needled this way (and I think it’s funny!), the subplot in which Norma (Peggy Lipton) resists franchising her restaurant and disapproves of making her recipes with lower-quality ingredients is a bald, none-too-subtle metaphor for Lynch himself.

Increasingly, each episode contains a number of nearly self-contained, tour de force setpieces. Lynch has used soundtrack cues in his movies before, but not quite like this: building off the logic of Mulholland Drive‘s “Llorando” rendition and the Roadhouse’s pay-attention-to-the-musicians closing credits numbers, part 15 deploys Otis Redding’s “I’ve Been Loving You Too Long” to heighten the unexpected euphoria of Norma and Big Ed (Everett McGill) finally coming together, transferring significant emotion to a pre-existing, unignorable property, ending with elated cutaways to literal blue skies ahead. (Lynch is, probably unintentionally, Bressonian in his ability to invest objects and nature with as much feeling and life as the people around them.) That’s followed by Evil Cooper’s virtuoso visit to the disembodied Philip Jeffries, with elements both familiar (they nearly always have to talk backwards in these other realms) and new, most notably the Tarr-esque tracking shot behind him, overlaid and dissolving over an elegant slow glide through the forest for a hypnotic effect that gives the potentially cliched extended walking-follow shot new life in an unfamiliar incarnation. Then there’s Caleb Landry Jones’s freakout into the woods, making for three back-to-back segments composing over half of this part’s running time, each unabashedly gigantic in their own ways. As in his non-hacky deployment of GoPro during Evil Coop’s car crash, Lynch should also be commended for being one of the very few people to have figured out how to use drones in a non-embarassing, consistently interesting way: slowing down their movement from the usual ersatz helicoper-shot speed, they rise, fall and move laterally with great looming gravity.

Throughout its run, actors’/characters’ aging has also been thematically foregrounded. Acknowledging the late Catherine Coulson’s death by having her Log Lady die as well is predictably moving and entirely characteristic of Lynch’s work. Two of his films —  The Elephant Man and The Straight Story — are explicitly about approaching and accepting death, both bookended by a camera moving towards or away from a view of stars and the night sky. Here, it’s clouds passing over the moon, nicely rhyming with Big Ed’s skies. Closer to the end of his life than the beginning, Lynch’s recurring preoccupation has become turbo-charged by the active aging and death of significant members of his cast, one of his recurring subjects now made sorrowfully real.