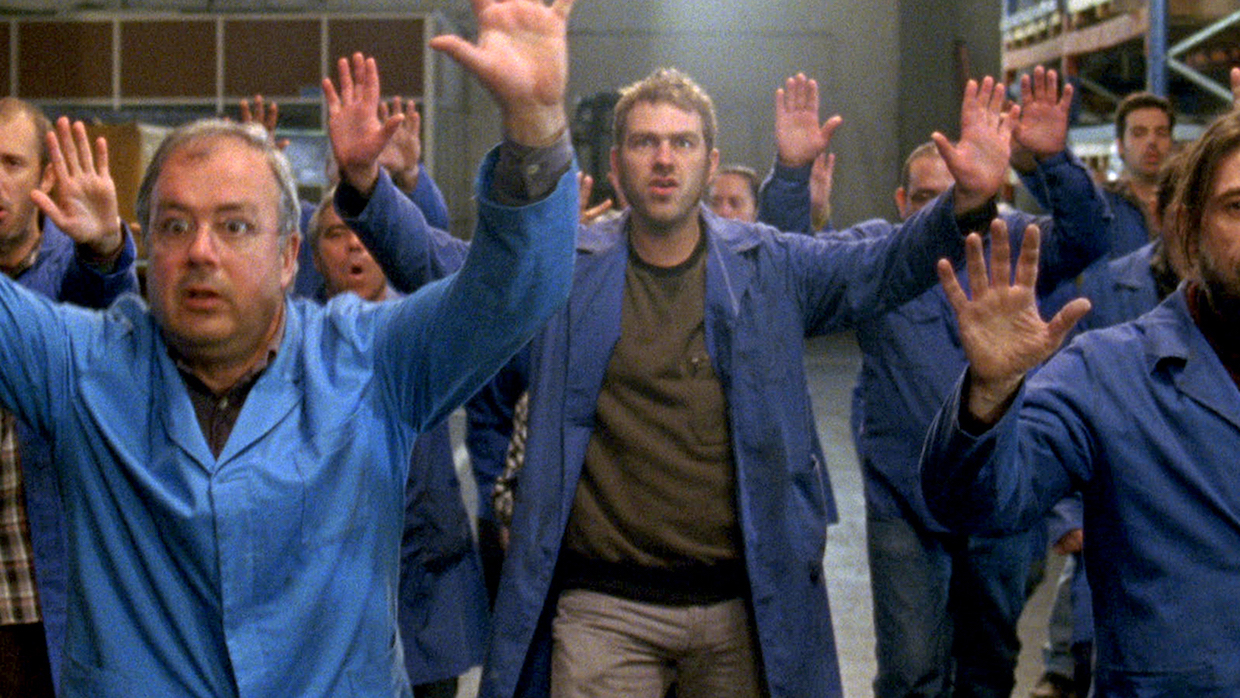 The very first thing I saw after arriving at TIFF was Pedro Pinho’s The Nothing Factory: a three-hour film is tough to slot into any festival schedule for practical reasons even before factoring in day-wearing-on exhaustion, and seeing it as a stand-alone first night entry point to the fest seemed like the right move. After some establishing shots of a squat silo being torn down and a factory in action, Pinho cuts to a couple having a sex scene. A phone call letting Ze (José Smith Vargas), the male half, know there’s trouble at the workplace intrudes: capitalism as coitus interruptus. Ze arrives back at work in the dead of night, when workers are angrily chasing off a middle-man mover loading factory tools into his truck, a clear sign that the owners were hoping to surreptitiously remove all working tools as the first step to a factory closure. Next morning, a top-level executive arrives, in tow with a new replacement manager and an HR person. Once she starts talking about this is a chance to “change and reformulate,” the workers rightly smell what she means: “When you say readjustments, all I hear is layoffs,” one says. The bulk of the film follows the showdown between management and labor: first as the workers come in daily to do nothing while waiting to see what kind of severance they’ll be offered, then as they choose to begin strike and occupation rather than capitulate to a series of forced layoffs clearly meant to pave the way for cheaper labor to be implemented elsewhere.

“A specter is haunting Europe,” a voiceover says. “The specter of its own ending.” (I’m almost positive the quotation is from The Invisible Committee’s To Our Friends, cited in the end credits, but don’t hold me to that.) Filmed in 2014-15 during Portugal’s recent period of austerity, The Nothing Factory is not remotely ambivalent about its power-to-the-people politics, even while interrogating internal factional divisions within the left: specifically as the workers barrel through procedural arguments —first about how to proceed to protest, and then as to whether they can make a self-managing factory work — and on a macro-level, via dinner party Conversations About Capitalism. Both tiers include documentarian Daniele (Daniele Incalcaterra), who eggs the workers on while sometimes restaging their conversations for what he perceives as more dynamic effect. Late in the film, his motives are called into question by Ze: is all Daniele wanted was to make a “neorealist musical” (there’s a few numbers late in the game) “to show your cinema buddies in France”? Aside from the inadvertent, beguiling image of an unlikely late-breaking addition to the Air Buddies franchise, the film’s self-reflexive interrogation is accurate (this did in fact premiere at Cannes) and unavoidable. The Nothing Factory collects arguments and puts them into collision courses with each other: it doesn’t resolve anything, including the at-elite-reserve nature of its existence, which is as it should be.

Shooting on super-grainy 16mm is itself perhaps a form of resistance against presumptive assumptions about digital pragmatism; like Miguel Gomes’s 6-hour Arabian Nights (but with far more consistent success), there seems to be the assumption that one way to fight the brutality of austerity is through “impractical” excess, whether of duration or otherwise. I could say that the film is a little overlong (one long sequence involving a boat trip and rusty machine guns makes a point about old-guard militancy that’s pretty redundant at that point) but that itself internalizes the logic of capitalism in dismissing anything that isn’t necessary, so let’s instead say there’s plenty of surplus value here.

I saw Nothing Factory first but am writing it up last: I know perfectly well that world/international premieres with bigger-name stars are a higher priority for more readers, and balancing traffic considerations is analogous to fest programming in terms of balancing passion projects vs. macro practicality. Perceive no lack of affection in my turning, finally, to the Wavelengths shorts for my closing notes. These four programs of experimental work are the standout of the Wavelengths section (which Nothing Factory was part of): each screening only once (“eventized,” as they say), forcing your hand to make these a priority, assuming that’s a scheduling luxury you have. There is something unbelievably refreshing about incorporating these: as I wrote last year, they “[do] wonders to clear the mind. It’s a different kind of stimulation, and if you don’t like one another will be along any moment.” Four highlights from my end; exclusion of other titles is not necessarily an anti-endorsement, but these are the ones that spoke to me particularly that I can myself speak of with some credibility:

Less parsable shout-outs to Fern Silva’s The Watchmen, Ephraim Asili’s Fluid Frontiers, Pacho Velez and Yoni Brook’s Mr. Yellow Jacket (very fun, but I’d rather write about it when the larger project it’s probably destined to be part of emerges) and Helga Fanderl’s Configuration in Black and White, as well as the digital preservation shown of Anne Helen Robertson’s Pixillation, which everyone seemed to enjoy. But most of all, perhaps, a shout-out to the Wavelengths audience, which is — as is so often with the case with experimental film attendees — faultlessly silent and respectful during each screening, but also contemptuous where it counts. It comes back to that question of practicality and access: it’s an unavoidable evil that each public screening kick off with bumpers for sponsors who (bizarrely) assume that people will love them after seeing the same spots over and over again. The low this year for everyone seemed to be the L’Oreal spot, whose smarmy come-ons (“Beauty is not scripted”), layered over the usual shots of flawless models in poses, did not speak to any kind of Message Of Inclusivity that was clearly being hoped for. Wavelengths is a space for open and active derision of such spots, whether it’s unabashed straight-up laughter or someone shouting “Stop trying to make us buy stuff we don’t need.” It’s a good place to be, and where I hope to refresh every time I get to attend TIFF in the future.