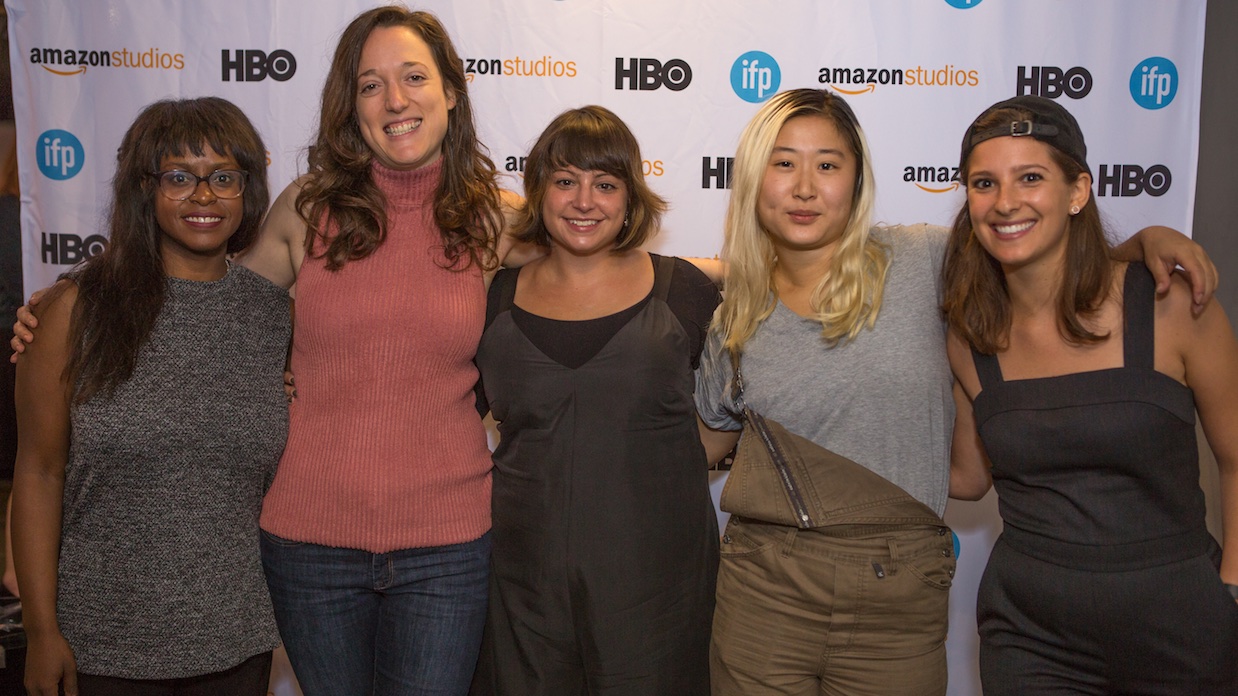 It’s been a wild summer for the film industry — and for anyone who has fucked with females. At IFP Week, I was happy to see Filmmaker contributor Taylor Hess touch, ever so delicately, on some of the issues around discrimination and mistreatment that have been plaguing us all. She hosted a panel version of her Persona Project column, which celebrates up-and-coming women in film. On the panel were Sara Kiener, head of distribution strategies at Cinereach; Taylor Shung, co-producer, A Woman, a Part; Aijah Keith, manager of acquisitions & production at IFC; and Dana Vladimir, head of communications and special events at Metrograph. The choice of who to include on the panel was refreshing. We get to see directors, writers and actors discuss filmmaking all the time, but rarely producers, or the people who handle the before and after phases of filmmaking. In some ways, the business side of cinema is a whole different ball game — albeit one that requires the same amount of creativity and prowess. Hess provoked discussion from each of the women about how they navigate their careers and, now that they have a platform, preserve their voices whilst steering clear of any others that threaten female, queer and minority progress in our field. There was no mention of League, Faraci, Belove or any of the other names that have been splattered across frustrating headlines in the past months — read those on your lunch break, people. The energy and attention was, smartly so, instead directed towards practical ways we can support ourselves and others in such a volatile time — gender aside.

And no, this is not a self-help article with bad art inserts — it’s about elevation. As Keith pointed out, there are rules and internalized misogyny that cloud thinking and skew confidence: “There are all these small things you’re programmed to do.” Let’s deconstruct and challenge some of the untruths that litter the independent film landscape.

You can’t have a career in film

If you don’t a) come from a famous family or b) have the capital to take unpaid internships early on, it can feel like a pipe dream to make a living in film, especially for anyone in the minority. More so than other years, people across all the panels at IFP Week weren’t afraid to discuss how they make money — or don’t. It’s probably due to a combination of societal exhaustion brought on by national insanity and the idea that until we talk honestly, we can’t really talk at all. We’re all bit screwed, so let’s go from there. The Persona Project panel was all in agreement that a lot of women don’t know they can begin a career in film — they sure didn’t when they were starting out. But each of them managed to establish themselves in the industry in different ways. Shung began in production design, Kiener was indeed an intern at Think Films and Keith participated in—wait for it—wilderness therapy.

“It didn’t feel like it was a real job that I could have,” Keith said about a film career. She had to drop out of NYU film school because she couldn’t afford it. She took up wilderness therapy to pay back her debt and, years later, landed an internship at IFC after a scholarship put her through school at Sarah Lawrence. Keith pointed out that her venture in therapy work “was the most formative time in my life.” It informed the way she manages conflict and personalities. There were different types of people “servicing one goal.”

When Kiener moved to New York, she bartended for seven years, and the stability of that job allowed her to figure out who she was and what she wanted. “I only stopped bartending five or six years ago,” she said, noting that she was still working the gig while working as an exhibitor relations manager at Magnolia Films. “We talk a lot about privilege and how you can only take an unpaid internship if someone else is paying your rent,” said Kiener. “No one was paying my rent. I want to talk about it because I want everyone to feel like there are ways to do it.” She added, “It’s not easy, but it’s possible.” And the bartending? Also helpful in terms of learning how to me decisions deftly and on the fly.

“Every day I’m still trying to figure out how to make a career out of it,” Shung admitted about filmmaking. She went to NYU film school where she worked mainly in production design before transitioning into producing. “I’m still paying off my student loans!” Applause ensued when she added that she’s on her last payment.

You’re not invited to the club

“There’s something called ‘the gay mafia,’” and it’s great, Kiener disclosed. She started to notice gay men in high places mentoring and helping younger gay men to find their footing. “I started to get mad and a little jealous.” Kiener is a queer woman herself and didn’t have the same help. But instead of envying that mafia, she started her own, organizing a queer karaoke night with all of her peers. “I want to make the community that I wish I had.”

Keith was also open about the benefit of creating your own club in the landscape — even if you’re the only member. “My experience is singular,” she said, often being a woman of color in white spaces. She’s had to go out of her way to make connections, drink dates and networking cabals that may have come easier to others. “Being really active and out there” has been key. She shrugged, not deterred, “It’s natural for me to be an outsider.”

“You choose your own destiny. If you want something you have to say it out loud and do it yourself,” Vladimir added, on trend with the “if you’re not invited, make your own invitation” mindset. “If you show that you’re capable to people, you’ll make it,” she added — although a heavy dose of patience and the bravery to continue to be vocal is required as well. “It’s a boy’s club everywhere, man.”

Shung, who also produces with Miami’s Borscht Corp, which helps finance and facilitate diverse stories, agreed: “There’s a strength and comfort in knowing you’re building an alliance.” But toppling the patriarchy doesn’t mean disregarding male allies — and this is a distinction I personally find myself advocating for. Shung might agree. A lot of the people early on in her life that gave her introductions to other amazing women were, in fact, men. With those occupying positions of power becoming, however slowly, more diverse, hopefully introductions and invitations will prove profuse and welcoming.

You have no power

“The longer than I’m in this industry, the more I am able to become the pain in the ass that I’ve always been.” Keith admitted she’s a sassy lady, outspoken, and that she made the mistake of hiding that in the beginning of her career. She assumed being “nice” was how you got ahead. But her inherent personality turned out to be “part of my power,” she said.

Kiener started her own marketing and audience outreach company, Film Presence, at 25 and admits, “By necessity, I had to get on the phone with men who ran companies and kick ass. Do that, or starve.” She was pitching men and women that she interned for only two years ago. It wasn’t easy, and she really had to step up — and yes, they met her there. “That’s where I am now. I hit that when I was 26 and that’s how I’m seen. But there was a huge leap to get there.”

“The only way you get things is to stand up for yourself — it’s gender neutral in that regard,” Vladimir added, but with further emphasis on the power that comes from genuine communication. Truly great leaders are also the most skilled at handling displays of vulnerability, even in a business setting.

“Honesty and directness” is also important to Shung when she’s working with others, no matter her place on the production totem pole. But whenever a discussion of power comes up, it’s all about balance, and making sure that power is not abused. “Honesty without tact is cruelty,” she specified. For those of us entering roles with power, let’s not make the same mistakes of those who came before.

Sexual discrimination is a joking matter

“A lot of men, to belittle the female presence, like to make jokes,” explained Vladimir. “They’ll make a joke out of sexual discrimination. That joke’s not funny.” It’s a way she sees men dealing with the uncomfortable nature of misogyny, especially now that more and more women are coming forward about their experiences. But Vladimir speaks back when she witnesses this behavior, even if it also makes her uneasy. It may be out of the norm, especially if she’s around superiors in a work setting, but it’s necessary. Without calling it out, there will never be acknowledgement discrimination existed in the first place.

“There is a lack of understanding on both sides of how systemic the problem really is,” said Keith. Keith recognized that woman have internalized misogyny as well, noticing small behaviors of her own that she needed to break free of. “I wouldn’t actually sit at the table in the conference room. I’d sit in the back,” she said. Discrimination lies within too, and Keith encouraged some serious self-examination from all parties. It won’t be pretty — and definitely not funny.

You can hold people accountable

Hess asked the panel how they decide which battles to pick — either for themselves or others. Kiener says that it comes down to “having a moral imperative.” Even so, when she speaks out on social media about a charged subject, she says her heart still races. Shung pointed out that she’s had to choose her battles that involve taking a moral stance, including ones with other women. She was on a set recently where it was a woman making the men uncomfortable by talking about her sex life in an unprofessional manner. You can hold people accountable — and should. Shung added that for her, it’s a process of learning about boundaries.

Vladimir urged that accountability should come on both sides: “We’re all trying to be equals here.” These notions led into a conversation about separating the art from the artist. It’s been a dramatic year for this topic (the summer even more so), with Casey Affleck and Nate Parker operating on different levels of acceptance after their sexual assault allegations were revealed. Keith said she’s quick to refuse to work with someone who’s done something morally wrong — there are plenty of people to work with who haven’t. Vladimir has a hard time separating the art from the artist as well. ”I wish I knew less rather than more,” she said, even as she challenges herself to not carry so much anger; it can radiate outward in even more negative ways.

“You’re working with a medium that’s so influential,” reminded Shung. She admires directors who use their platform to make statements that aren’t necessarily visible on screen, like promoting diverse crew hiring practices. But, she says, “it’s complicated, we’re all people, so we fuck up.” Yet unless we all start holding accountable the people in our community with power — and, yes, as recent events have shown, we all have that opportunity — we’re not going to see progress. When it comes to standing behind an artist or not, “You have your internal code of where that line is.”