“We Wanted to Make it a Very Sexy Fish…”: Five Questions for The Shape of Water Director Guillermo Del Toro 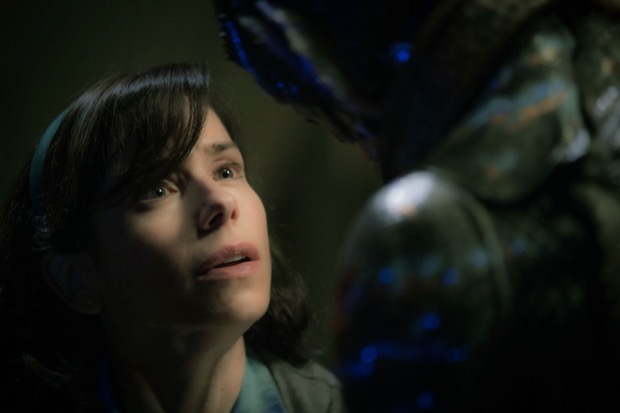 The Shape of Water

by Ariston Anderson
in Directors, Interviews
on Nov 30, 2017

If Guillermo Del Toro hasn’t already cemented his place as one of the great storytellers of today, he certainly has with his latest film The Shape of Water, a Cold War-era twisted fairy tale opening today.

Sally Hawkins stars as a mute cleaning lady, Elisa, working at a government agency, whose only friends are her co-worker Zelda (Octavia Spencer) and her gay neighbor Giles (Richard Jenkins). An imposing government agent Strickland (Michael Shannon) arrives with a mysterious amphibious creature in tow, played by Doug Jones. While Strickland is intent on studying the creature for whatever military value this research might hold before then killing it, Elisa falls in love with the creature.

In a reversal of the typical Beauty and the Beast story, Del Toro’s beast never turns into a prince, instead functioning as a kind of proxy voice for characters that society regularly regards as invisible. And while it’s a monster film at its core, The Shape of Water is very much written as a love film for today, with communication as the most powerful tool. At this year’s Venice Film Festival, where the film premiered, we spoke with Del Toro about writing a love story, creating the world of water on film, and when he first fell in love with monsters.

Where does the title of the film originate?

Water is the strongest element there is, because it has no shape. It takes the shape you need. It’s soft and malleable, but it can cut through rock. And exactly the same thing can be said about love. Love has no shape. It takes the shape or the entity of the person that you put it in. I very much wanted to show the story of a love that seems to be between two creatures that are completely opposite of one another.

When you fall in love, no matter what the ideologists tell you, you will fall in love with someone of a completely different religious background, your same sex, different skin color — when you fall in love you just fall in love, there is no need for permission. I could call it the shape of love, but I think it’s much better to make the creature come from the water, and to show Sally’s connection to the water, because it’s revealed in the end that she may have had much more in her origin than she recognized in the creature. They took a long time to meet each other, but they meet each other.

Why was it important for you to write about love?

I co-wrote with Vanessa [Taylor], which was important for me. The curious thing was Vanessa ended up writing more the thriller and the Russians and all that, and I ended up writing the romantic stuff. But I think it’s because in essence, you can qualify my gender or you can qualify my spirit [but] I think that we have the same emotions. We are all human. I write the way I fall in love, the way I remember my first love, the way I recognize the essence. I mean when you see someone and you fall in love, there is no explanation. That’s why I wanted to make [Elisa] mute. Because when you fall in love you can talk about it all day long — “I love you, I love you, you are my life, I adore you, I cannot live without you,” — and you can say it all day and you believe it, and it’s not enough. No matter how many times you talk about it, it’s not enough. You have this desperation to say, “You don’t understand what I feel for you.” And that’s why there is a moment in the movie when [Elsa] wants to talk and she can’t, so she sings. And she’s mute so she sings in her imagination. She sings, “You’ll never know how much I love you, you’ll never know how much I care.” That’s how I feel it is; it is the most powerful thing in the universe, and we are so afraid of it right now.

Tell me about the work required to design the monster.

We took three years to make this creature; from beginning of design to end, three years. And it’s because he was going to be on the screen like a normal actor. And Doug needed to act but also you cannot look at it and go, “Oh that’s a suit.” He needs to become the character. Designing it was very, very elaborate.

We wanted to make it a very sexy fish, that [would be] really beautiful to look at, and that you could say… “Well, maybe in a pinch.” So it was to design him to be aquatic, very lean. We spent so much time sculpting. It was designed in 3D.

How did you conceive this world visually?

I wanted the movie to feel underwater for the majority of the movie except for in a few places. I wanted to contrast the cyan and blue that were completely marine in her world, and the worlds outside her world, I wanted to make them warm and daylight. For example the bad guy, Strickland’s home, is all gold. Giles’s apartment, even in the same day, when they cross from one apartment to the other, is all gold. It’s like she lives underwater and works underwater and there is the other daylight world and the police at the agency is much more warm. I divided the movie into those two worlds, and I tried to make the textures of the underwater world be very rich like a fairytale.

Do you remember when you first fell in love with film?

Yeah, I did with Universal monsters. When I was a kid, there was something that black-and-white monsters gave me that nothing else gave me — it was a flavor. I remember seeing the original King Kong on a Sunday, with a bucket of chicken, and I stopped eating. I said “What is this?” And it was from the ‘30s to the ‘60s and I was like, this is so beautiful, how do they do that? I was in love with monsters from when I was a little kid, and I still am.

I was a Catholic, lapsed since many decades ago, but to me the creature of Frankenstein has exactly the same weight that some old ladies in black give to Jesus. It’s kind of a martyr, and a beautiful messiah. It moved me. When I was a kid I saw that creature and I thought, that’s me. That’s me. When he was with the blind hermit, I was like, “that’s me.” They became religious icons. And the Creature from the Black Lagoon, I can only tell you I drew that monster all my childhood. It’s the most beautiful monster, one of the top three ever made.